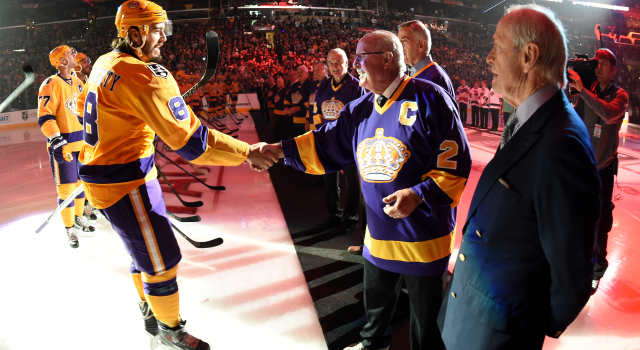 Bob Wall, on the group’s visit to the Kings locker room:
We walked into the dressing room there, just the old players first. I just looked around and just admired the cleanliness of the room and the equipment and the sticks – everything was so nice and neat. I looked up at the name tags and saw Jiggs McDonald. And I thought, ‘Jiggs McDonald’? So I start looking around and I saw all the old players … and then I looked around and said ‘whoa, what’s going on here?’ So I went over to the stall that had my name above it and I thought, ‘what’s going on here?’ So I took a hold of the sweater and I turned it around and my name’s on the back, I said, ‘wake me up, something’s goofy here.’ Anyway, it was quite a thrill to walk into that room and to see the facilities afterward, some of the facilities that these athletes have today … it’s a far cry from what we had. [Reporter: What were the facilities like?] We only had a small trainers room. You have the whole ball of wax here. They have a lounge here. We had nothing like that. I guess the one thing too is with our spouses, with our wives, after a game our wives used to have to wait for us in hallway after we’d come out of the dressing room. They’d wait for us to come out and we’d be on our way. Here these guys have their own lounge for their wives. Hey, that’s what it’s all about. I just love this organization. The guys at the top have done a great job and I just thank Luc Robitaille, I guess he spearheads the whole thing. They’ve just done a great job.

Wall, on what it’s like seeing old teammates:
It’s very interesting because some of the fellas, you look at them, ‘I should know you,’ that type of attitude and some of the guys I recognize right away. Of course we’ve all gotten a little older, a little chunkier, it was a nice experience getting together with them. There’s some of the guys that didn’t make the trip whether illnesses or whatever that I feel bad about, it would have been nice to see them, but so be it.

Wall, on what he remembers about the first Kings game at Long Beach Arena:
One instance in the first period I scored a goal right off the bat, I deflected it in past our goaltender. So where’s the hole in the ice? Where can I fall? This is supposed to be our game, it’s in our rink. But, later on though I did score another goal – for us – so … OK, I made it for the night. It was interesting playing there. It was nice to get to the Forum and finally open the doors of the Forum. I remember taking the opening faceoff. Jack Kent Cooke, he wanted the two defensemen to take the faceoff. We were playing against Philadelphia and he wanted the captains from both teams and Ed Van Impe was the captain of Philadelphia at the time and here we look at each other as two captains facing off, two defensemen facing off. It was pretty neat. The one thing I regret about that opening faceoff too is that there was cameras there but I never did a picture of that opening faceoff at the Forum.

Brian Kilrea, on what he remembers about playing in the first season at Long Beach Arena:
It was exciting for us because a bunch of us had come from Springfield and we had played there so we were familiar with each other, but trying to put everyone together after they picked the team. And then all of a sudden, new teammates, and excitingly we were looking forward to that first game.

Kilrea, on scoring the first goal in Kings history:
Well, the worst part was, if I recall right, we fell behind one-nothing and I think it was even two-nothing and Teddy Irvine came down left wing and got into a scrum in the corner on the right side and Lowell MacDonald and him worked out the puck out and I just made a quick shot that found the net, so that was Game 1. And then we came back and tied it and eventually went ahead and we scored in the empty net to make it 5-3.

Kilrea, on whether it was possible to see the big picture and impact the team would have:
It was a new adventure because it was going to be hockey on the West Coast and we were going to be part of it. And you give all the credit in the world to Jack Kent Cooke. He was a guy who wanted to have a team here and he had a few obstacles to pass in satisfying the other owners in the National Hockey League that it would go, but he made it go and it was his will. And getting the Lakers together, I remember we were having a party up at his house and meeting the Lakers — and I was a big sports fan as well as for the Lakers — meeting some of those players, it was a big thrill. He had this idea about having an empire in sports and he did it.

Kilrea, on what he remembers about playing in the Forum:
It was the pillars to me. The pillars all around, I think [Jack Kent Cooke] said he wanted to build it like the Coliseum, the old-timers with Roman Empire. He did it his way, whatever he did he tried to do first-class. I don’t know if he ever had a money crunch but we would never have known because he was doing everything he could to make us first-class.

Howie Menard, on what it’s been like to have a reunion with old teammates:
It’s been a while. Fifty years for some of the guys. I’ve been waiting quite a while for this. I was hoping it would happen sooner because there’s a few guys that aren’t around now. But anyway we’re taking advantage of this and we’re going to have a good time.

Menard, on what he remembers most about his time with the Kings:
Just getting back in the National Hockey League. The first year of expansion was something. That was the whole thing. It was only six teams and it went from six to 12 so it was an opportunity for every guy on this hockey club to get a chance to play in the National Hockey League. That was the big thing, actually. Otherwise, who knows, maybe we wouldn’t have gotten the chance except for expansion. We were all thrilled about that. Plus, we had a pretty good hockey club in L.A. the first year.

Menard, on watching the Kings win their first Stanley Cup:
It all originated in ’67 so we all felt good about that because we were the ones that really got things going and they built on all that. So, it was an honor really to play here and see what they did, winning that Cup. It was great. We were proud of them.

Menard, on whether the group has had much time to visit together:
We did last night. We had a little get together last night at the hotel and had a few beers. Had a few old stories floating around, so we had a good time.

Brent Hughes, on what it means to him to be here for the anniversary:
They really did a great job of this. [From] day one everyone’s been talking about it. They’re treating us well, feeding us well, showing us around and giving us shirts (pulls on his jersey). It’s been great two days and we’re looking forward to the big gala tomorrow.

Hughes, on what it’s been like to see old teammates:
It brings back good memories and it brings back some not-so-good memories of the guys that haven’t made it. It’s been 50 years and there’s been about five or six of our friends that have passed on but it’s nice to be here with all these guys. A laugh a minute.

Hughes, on if he keeps tabs on the current Kings team:
I honestly don’t watch a lot of hockey but I do enjoy the playoffs because it’s a step up. When the Kings won, it was ‘way to go guys.’

Bryan Campbell, on what he remembers about the newness of hockey in California:
Because the city’s so big and we all come from small towns we’re used to playing hockey in the winter time not in the summer time, so the weather I found was a big factor, found it very warm. I myself, Eddie Joyal, Brian Smith, Dave Amadio, we rented a big townhouse in North Hollywood, just below the sign, because we practiced in Burbank. The only car we had was Brian Smith’s so everywhere we went we had to go with Smitty. He wouldn’t lend us his car so it was four of us always traveling around together as a big group. [Reporter: Was it the Pickwick ice rink?] That’s where Sonja Henie was skating. I met her when she was practicing. That was fun times.

Campbell, on whether he remembers much about playing at Long Beach Arena:
Not really. It was just like we were playing on the road all the time. We didn’t get into the Forum until just near the end of December. You’re so excited to get there, home base, your own locker room, don’t have to change that much anymore. [The] practice facility was the only downfall. I like to practice in the same building but that was the sport: practice in one building, play in another. It seems so long [ago], 50 years is a long time.

Campbell, on whether at the time he could imagine big picture what it meant to have a team in L.A.:
No, I was like 22 years old. I was just so happy to play in the NHL. That was my childhood dream to play in the NHL. Just play your heart out to try to stay here was my main focus and not really thinking about anything else. 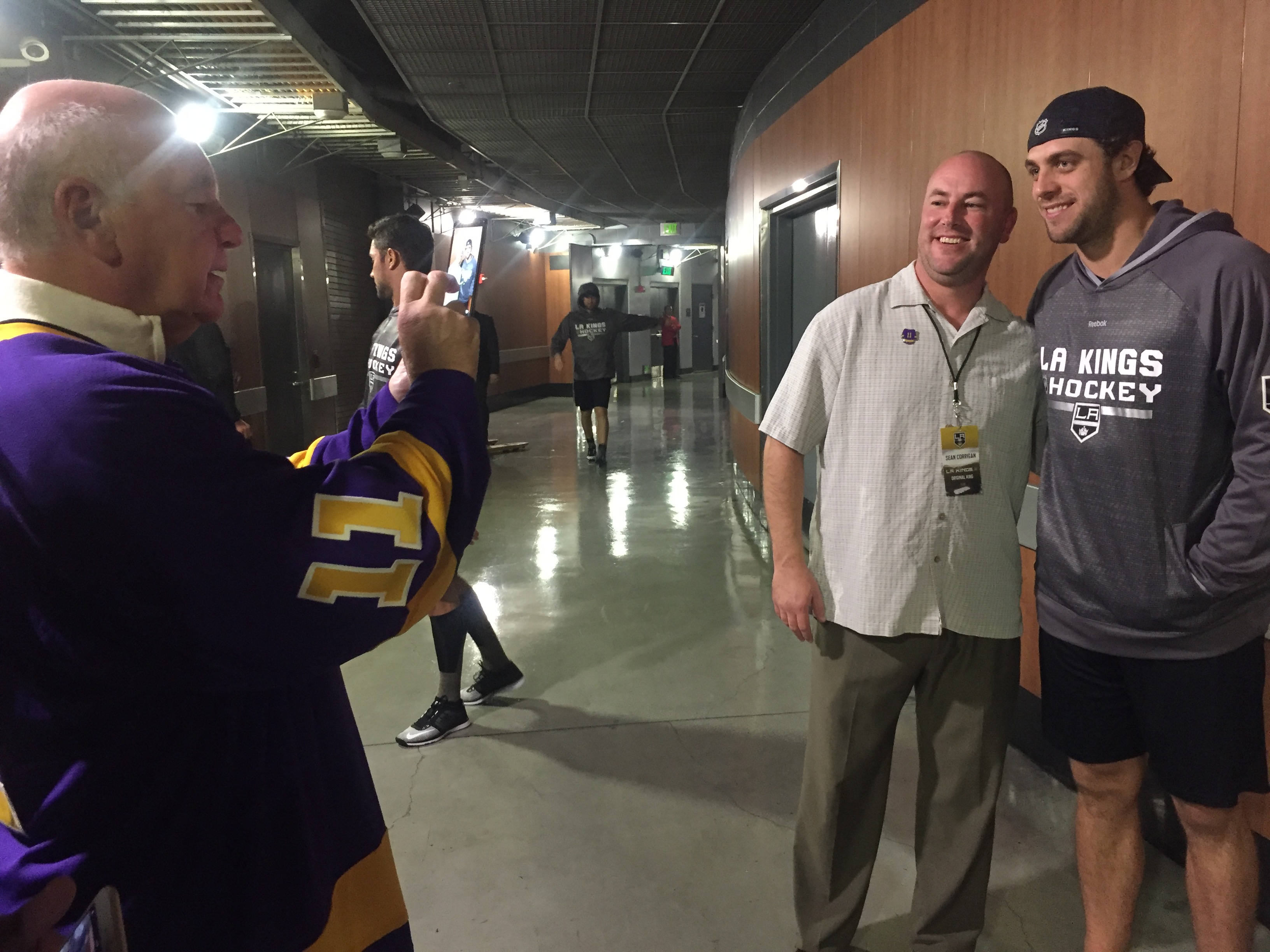