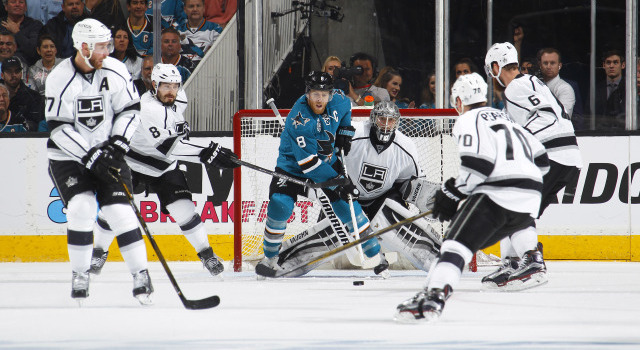 In the nascent stages of an NHL season, penalties are called more frequently than they are in later stages of the season. The most extreme example of this was the 2012-13 season, which resumed in mid-January after a work stoppage, and through the first five games of that season, the Kings and their opponents combined for an average of 10.8 power plays per game.

In last year’s opener, Los Angeles and San Jose were whistled for 14 penalties that resulted in power plays, with the Sharks scoring on two of their eight opportunities. Given San Jose’s traditionally strong top power play unit, especially at home, limiting the likes of Patrick Marleau, Joe Thornton, Logan Couture, Joe Pavelski and Brent Burns, and denying surplus infractions will be a significant factor in tonight’s game.

“Don’t take ‘em,” Darryl Sutter said about limiting stick infractions tonight. “That would be key, wouldn’t it be? I mean, keep your stick on the ice. That would be a key.”

Last season, Los Angeles’ penalty killing ranked 15th in the league with an 81.4% success rate, compared to San Jose’s third-ranked power play, which operated at a 22.5% clip. In the teams’ five-game postseason series, the Sharks scored on five of their 21 power plays.

On the flip side, the Kings have ranked in the top-10 on the power play in each of the last two seasons, and connected on 20% of their opportunities last year to finish eighth in the league.

Dustin Brown, on what to be aware of early in the season, when more penalties are called:
Just our structure, really. Tonight we play one of the best power plays in the league. They’ve been together for years. We know them really well, but the fact that they’ve had almost a decade together helps them. On the flip side of that, a lot of our PK units, at least up front, have been together for a while. Early on, it’s just about details. The power plays will be there, and both sides will be a little off, so it just comes down to the details.

Brown, on how to avoid taking penalties at this time of the year:
I mean, it’s probably just moving your feet a little bit. From a player’s standpoint, but I think league-wide there’s probably more penalties in the first few games just because it’s a new season, right? I don’t know if that’s backed by actual penalties called and stats, but it definitely feels that way every year. They call it really tight, and as the year goes on, you find a happy balance.

Trevor Lewis, on what the Kings have to be aware of with San Jose’s top power play unit:
They’ve got a good power play, we all know that. They’ve been together for a long time now. We know what they like to try to do. We’ve just got to try not to allow them time and space and clean entries into the zone and things like that, and when we get our chances to block shots or get clears, we’ve got to make sure to bear down and do it.

Lewis, on what to be aware of during early season games when more penalties are called:
I think you’ve got to keep your shifts short. I think when you’re tired is when you kind of get into trouble. As long as we’re quick at the beginning and get the legs going – we’ve definitely got to try to stay out of the box tonight.