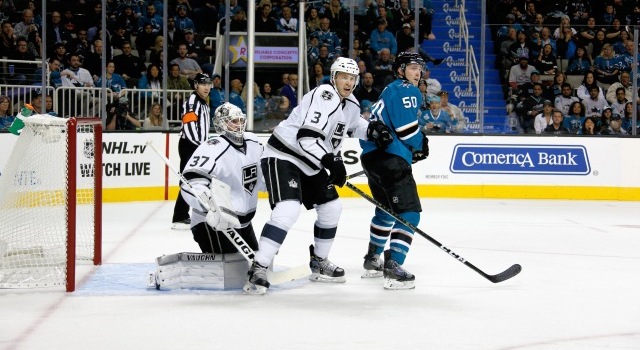 Jeff Zatkoff, on the way the team battled after Jonathan Quick’s injury:
I thought it was a pretty even game. We played hard. Dewey makes a good play there, and it happens just to land on Burns’ tape. Unfortunately that’s the difference in the game. We’ve got some things we feel we can clean up. We don’t think we played our best. It’s tough. You don’t want to lose a division game to start the year off, so we’ve got to make sure we’re ready to go here on [Friday].

Zatkoff, on what he has heard about the injury:
I haven’t heard anything.

Zatkoff, on his mindset entering a game early:
It’s my job to be there when Quickie needs a break or goes down. So I make sure the team doesn’t miss a beat. I go in there and make the saves I’m supposed to stop and get the team a W. We fell short tonight.

Zatkoff, on the challenges of entering a game after one period:
I had an intermission to prepare and get ready. I think that always makes it a little easier to kind of give you that time to mentally get ready to go in. I’ve played a thousand games. Once you’re in there, it’s all the same. Everything comes natural. You’ve just got to stay out of your own way mentally and just get in there and play.

Tyler Toffoli, on the 2-1 loss:
I think we were kind of sloppy. I think we weren’t really crisp coming out of our zone and that affected us and our zone time – playing in their zone. So it’s something we’ve got to work on and obviously get better at and get ready for Friday.

Toffoli, on how the team sentiment is affected by losing Quick 20 minutes into a season:
We all know what Quickie brings for our team and what he’s done here, but we can’t be thinking about that. We’ve got to be positive. Zats played unbelievable coming in today. We’re confident in what he has for our team, and we just have to play our game and shut them down, and like I said, if we’re good in our zone coming out, we’re going to be really good playing in their zone. We have some big bodies that can play down low and play that type of style.