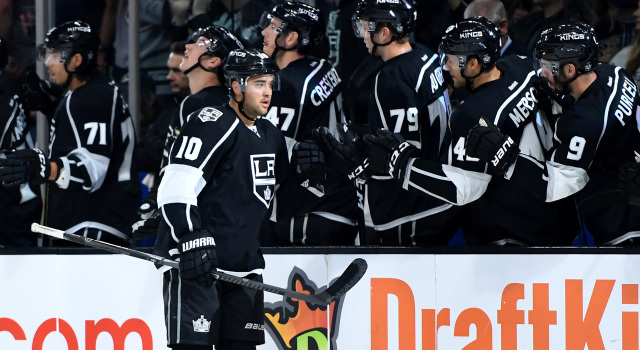 It was necessitated in part because of a need for a player of his skill set in the wake of Marian Gaborik’s injury, but let’s put aside those details in the name of a great redemption story. Devin Setoguchi, whose struggles with alcohol and substance abuse and depression were candidly expressed and well chronicled by The Hockey News’ David Pollak, has capped off over a year and a half of sobriety and an invitation to the Kings’ training camp by signing a one-year, two-way contract with the club.

Via a hockey operations source, “the salaries are at minimum amounts as this is an opportunity for Devin to re-establish his NHL career and prove he belongs here every day.” That places his salary at $575,000 at the NHL level and provides the forward, who has 127 goals in 471 career games with San Jose, Minnesota, Winnipeg and Calgary, another NHL opportunity after having communicated over the summer with his former Sharks teammate and current Kings Assistant General Manager Rob Blake, in an effort to land a training camp tryout. Last season, Setoguchi totaled 11 goals and 24 points in 30 games with HC Davos of Switzerland’s National League A. He had one goal and two points in five preseason games with Los Angeles.

Though there is a need for Setoguchi’s services with Gaborik’s absence, the forward clearly understood on Monday that the agreement was more or less an extension of his training camp opportunity. “It’s still, for me, an everyday evaluation on my attitude, my work ethic, my play, my ability, so I’m just thankful to be here, but at the same time I know how important and how critical it is for me to push myself every day in order to get back,” he said.

At practice, he has recently been skating the right of Dustin Brown and Anze Kopitar.

“I know what type of player he is just from playing against him,” Kopitar said of Setoguchi. “Obviously we’ve seen him a lot over the course of the years when he played in San Jose and he had all those good years, scoring a lot of goals. We’ve played obviously quite a bit of attention towards him, and you learn from that. I obviously certainly want to utilize that and give him the puck in the spots that he’s comfortable with, and hopefully he can put the puck in the net for us.”

With the signing, and the establishment of the Kings’ opening night roster – story coming – the club now has $70.87-million allotted to 23 players plus Marian Gaborik, who is on injured reserve, providing roughly $2.13M of cap space, according to financials provided by General Fanager. These financials include Gaborik’s cap hit, the $1.57M devoted to Mike Richards’ settlement and cap recapture and the $175,000 hit necessitated by Rob Scuderi’s assignment to the AHL.