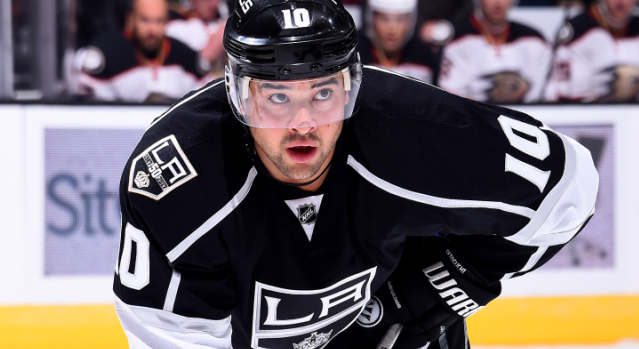 When Devin Setoguchi was released from his tryout with the Toronto Maple Leafs last fall, a good friend, Joe Thornton, was quick to point him towards HC Davos, the Swiss outfit with whom the veteran center had spent the previous two work stoppages.

After posting 11 goals and 24 points in 30 games in Davos, Setoguchi reached out to another former teammate in looking to resuscitate his NHL career, which had stalled early in the 2014-15 season due to complications related to depression, substance and alcohol abuse. What started out almost as a favor between Kings Assistant General Manager Rob Blake, another ex-teammate of Setoguchi’s in San Jose, could end with the veteran forward being offered a contract. UPDATE, 6:45 p.m.: The Kings are “working on the contract,” though nothing had been finalized as of Tuesday evening.

As of the publication of this story, nothing had been made official, but Setoguchi certainly seemed to suggest that there was a merit-based and open-ended invitation to continue his play with the team and skated to the left of Anze Kopitar and Dustin Brown when practice reconvened at Toyota Sports Center. Earlier in the day, a hockey ops official said they’d be “speaking with him” after practice.

“I had a talk with Blakey the other day, and how thankful I am,” Setoguchi said Monday. “I started this chance on a comeback last year, worked into this year, knew coming into camp that there was $57,000 in cap space. That’s kind of draining on a guy, anyway. So for things to work out in the right way and for me to get my opportunity, it’s not like I’m here and I’m here to stay. It’s still, for me, an everyday evaluation on my attitude, my work ethic, my play, my ability, so I’m just thankful to be here, but at the same time I know how important and how critical it is for me to push myself every day in order to get back.”

Teams have until 2:00 p.m. PT Tuesday, October 11 to submit their 23-man roster to begin the season.

The Kings did not want to see any “let-up” in Setoguchi’s play during training camp, according to a team source, and though Darryl Sutter said “early in camp he was better than later in camp,” there is a need for Setoguchi’s speed and goal scoring ability with Marian Gaborik unavailable at the start of the season after having suffered a broken foot at the World Cup.

Setoguchi finished with one goal, two points, a minus-four rating and six shots on goal in five preseason games and knows that should the invitation to play alongside Anze Kopitar be extended, he’ll have to fill a need in that role.

“I mean it’s good as long as you can produce,” he said. “You’re going to get the opportunity to play, and it’s what you do with it that makes you and your game. Obviously they’re both really highly talented players, and I’m thankful to be in the position I’m in right now, but I can’t get complacent or take things for granted. It’s going to be constant work for me, and I need to make sure that if I’m playing with those guys that I’m doing something right in order to stay there.”

Devin Setoguchi, on his final preseason game:
I mean, it was a weird game. I think I played three shifts in the second period. It wasn’t the greatest game, but it wasn’t a bad game. In order to play here, Darryl wants you to play a certain way, and I thought I did most of those things, and as long as I did that, I thought I gave myself a chance. By no means is it over. It’s an everyday thing for me where I’ve got to make sure that I keep improving and getting better, and trying to prove my worth here in L.A.