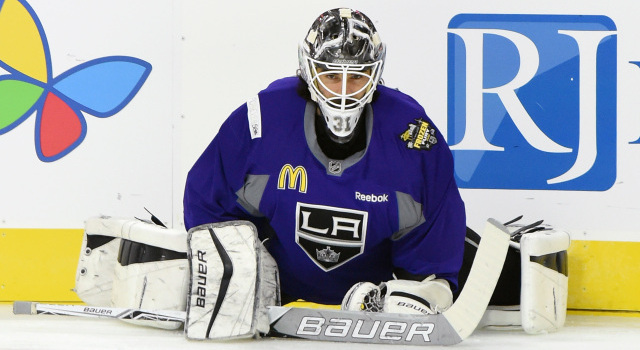 The Kings made one roster move on Sunday, assigning goaltender Peter Budaj to AHL-Ontario. With the team’s goaltending officially set – Jeff Zatkoff will back-up Jonathan Quick – the move leaves the club with 28 skaters battling for 21 spots. The 23-man roster must be submitted by 2:00 p.m. PT on Tuesday, and I’ve heard from hockey operations that the final decisions on players are likely to be made Monday afternoon.

It appears as though several defensemen can already be omitted from that group. Rob Scuderi’s future with the organization is unclear, and on Friday, while acknowledging that the veteran defenseman had sat down with Dean Lombardi following a “rough” camp in which he sustained an undisclosed injury, Darryl Sutter underscored his admiration for the 783-game pro. “I have way too much respect for Scuds … to even to get into any of that,” he said. Hockey ops has said that his situation will be addressed Monday. Also, it shouldn’t surprise anyone when hard-nosed 22-year-old Kurtis MacDermid, who has remained up for the entirety of camp and has drawn acknowledge from up above for his development and tenacity, is reassigned to Ontario, giving the team a pool of nine defensemen from which the team will select either seven or eight. Michael Mersch, Kevin Gravel and Adrian Kempe are players who wouldn’t have to clear waivers to be assigned to Ontario.

The Kings open the season at San Jose on Wednesday, October 12. Have at the final roster.