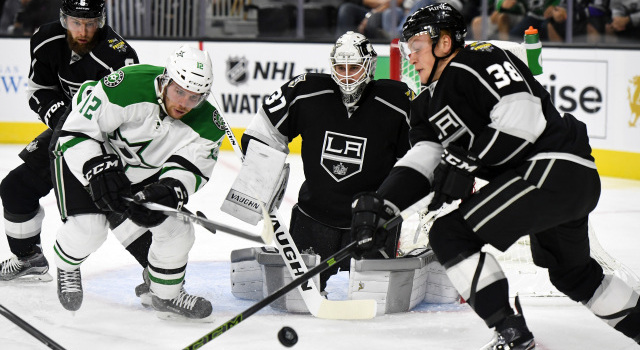 Darryl Sutter, on establishing detail late in the penultimate preseason game:
Well, we had a lot of opportunities. I think they had a little more firepower in their lineup. They don’t need as many opportunities to score.

Sutter, on Michael Mersch’s netfront presence in the win:
It’s pretty normal for him. He didn’t do anything different than he normally does. He gets a lot from the dot to the net, a lot of opportunities … [phone rings; audio inaudible] … guys like that on the ice, again, because he can finish.

Sutter, on what he’ll look for in the final preseason game:
Trying to get some guys who didn’t play tonight in tomorrow’s game. That would be it.

Jeff Zatkoff, on the ice conditions:
It got a little choppy at the end, but that’s expected. I don’t think there’s been much played on it. But, really fast, I thought, compared to some of the rinks in the league that we’ve played on. Having the fast boards makes the ice seem faster too, but I thought for the first 10 minutes of every peroipd it seemed to play fast. Any rink in this league, especially multipurpose buildings are going to get choppy as the game goes on, so that’s nothing new.

Zatkoff, on how the sightlines from the crease and black seats compared to other arenas:
It’s bright out there. It’s really bright, the lights. It’s kind of weird. There’s quite a contrast between the dark seats and how bright it is out on the ice. It definitely took me a morning skate to kind of adjust with your eyesight, but once you’re playing the game it’s all the same, except when there’s a high flip in the crowd. The biggest thing for me and I think a lot of guys were saying – the lights are very bright. So I think there’s just adjusting to it, but tonight, once you started playing the game, it was fine.

Nic Dowd, on the importance of the final preseason games:
It’s two really critical games obviously for a lot of guys in here, including myself. I think there’s opportunity to be had. It’s important to know that and take advantage of it.

Dowd, on his performance tonight and his goal:
I felt OK. The goal was nice I think, it was good. Lost the game obviously, would have liked to get the win. Played better as a team and I think personally just — I think everything’s going to help my game starting in the defensive zone and I didn’t think I was great there tonight. I thought I was pretty good on draws, I haven’t seen the stats. I think my D-zone needs to improve though.

Dowd, on what he wants to accomplish in tomorrow’s final preseason game:
Just play a responsible game, a 200-foot game. I think just be good in my own end and everything else will take care of itself through the neutral zone. Obviously if I’m good in my own end I’ll have the puck more in the offensive end and have an opportunity to create stuff.

Michael Mersch, on whether there’s pressure to score in these final preseason games:
You always want to score goals. I’ve proven that I can do it before. It’s a little pressure I put on myself. You always get a little nervous when you’re not putting the puck in the net because you never know when the next one’s going to be. Yeah, there’s some pressure and it’s competition.

Mersch, on the training camp process:
It’s tough. I think you just have to focus. I’ve been focusing day-to-day, every day at the rink, just do whatever I’ve got to do to get ready and act as if every practice is a game, every pregame skate is a game. So, just all that type of stuff because you’ve got to be sharp at all times.

Mersch, on if there are still any nerves playing at the NHL level:
I wouldn’t say so much nerves anymore. Maybe when I was playing my first game, that was more nerves. Now it’s when you get more comfortable and it’s just a matter of going out and doing it. You’ve got to believe in yourself and go out there and do it.

Mersch, on his skating:
I think it’s gotten a lot better. I felt like I came into camp in really good shape. Worked out hard all summer and it feels pretty good to me.