Focus back to Kings as Doughty practices for first time 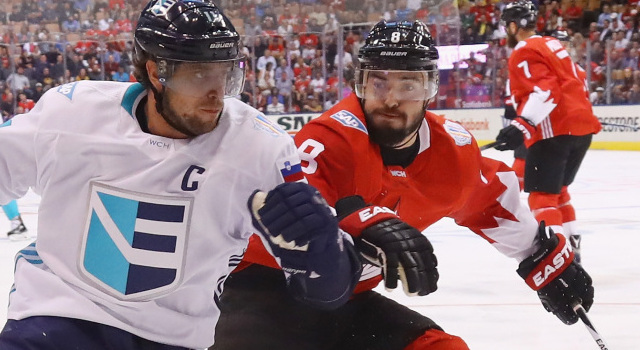 Drew Doughty rejoined Kings practice for the first time Wednesday after returning from Toronto, where he registered two assists and a plus-five rating in Canada’s six-game title romp.

“It was a great experience. Had a ton of fun,” Doughty said. “It was a great group of guys. It was obviously a great team, and to get the victory, that’s the icing on the cake.”

And that’s all well and good. But now attention turns towards the Kings’ 2016-17 season, one in which he’ll need to continue his all-world play that resulted in his first career Norris Trophy last year, in order for the Kings to maintain their hold on a playoff spot.

Darryl Sutter said that Doughty’s absence for all but the final week of camp shouldn’t be a major impediment to the team’s efforts early in the season. “Obviously the toughest part for me is not those guys missing camp – they only play one or two [preseason] games, anyways, or two or three,” he said.

But Doughty would like to get into one of the final preseason games in Las Vegas this weekend. Los Angeles faces Dallas on Friday and Colorado on Saturday before opening the season next Wednesday in San Jose.

“Yeah, I wouldn’t mind one. I don’t know if I need two,” he said. “I’ve played … [six World Cup] games already, so with exhibition even more with that. I think one would be fine, but if they need me for two, obviously I’m not going to say no. The more games I can get under my belt before the season starts, the better prepared I’ll be.”

In his first media availability since rejoining the team, Doughty spoke about his experience at the tournament and the circumstances surrounding what will be his – gasp! – ninth NHL season.

Drew Doughty, on playing elite international competition in September:
It was tough. The first couple games, exhibition, it was kind of like you didn’t even remember what happened. Everything was just happening so fast, and you felt like you had no time to make plays, and they were both physical games against the States, so it was tough to get into it. A lot of guys kind of had little, minor injuries right off the bat, just because you’re getting right into the thick of things right away. Everyone got fully recovered throughout the tournament.

Doughty, on Mike Babcock:
He’s a great coach. He’s really smart. He gets to the point. He has really, really short video meetings and just gets right to it and tells you exactly what he wants. He’s a great coach, a great motivator and I loved playing for him.

Doughty, on any different approach between the Olympics and the World Cup:
No, we approached it the exact same way. Obviously the only difference is you’re not in the Olympic Village, eating the Olympic Village food. You’re going to restaurants and you’re able to go see your family and stuff in between games, so that was the biggest difference. But besides that, we treated the tournament and playing other teams the exact same way.

Doughty, on whether it was “strange” to play against Anze Kopitar:
It was strange. It was the first time, and the first game in the round robin against him, me and Muzz actually matched up against him, so we were out there a lot against him. I obviously know how good
Kopi is and what he does for this team, but to play against him brings another element and shows how tough it is for other defensemen.

Doughty, on returning to Toronto for the World Cup:
Yeah, that was huge. Hometown – well, the closest [National Hockey League] rink to my hometown, and there were so many guys from Ontario that were on that team, that are from that area, and the fans are obviously crazy. The city was just going nuts for us and the Blue Jays, so it was a crazy time. It was a lot of fun – I had a blast.

Doughty, on whether his absence from training camp serves as a challenge:
No, if anything, I think it gives me – I don’t know if I’d say an ‘advantage,’ but I feel like as if it might be a little bit of one playing with that high caliber of players and at that speed. Hopefully that causes me to be a step ahead right off the bat, and I can hopefully carry that throughout the rest of the season.

Doughty, on his career and personal accomplishments:
It’s been crazy. I’ve been very fortunate to have great teammates and great teams that help me win those championships. I couldn’t be happier, but I still just want to win more Cups, more gold medals, whatever it may be. I love winning and hate losing, and I’m looking forward to hopefully getting to the playoffs and winning a Cup here again. [Reporter: Is this where the greedy part of a high-quality athlete comes into play, where you’re not satisfied and you want to keep pushing?] You can’t be satisfied. Right when you become satisfied, you’re not going to be pushing yourself to become better, and everyuone has another level, and eventually it goes the other way, but that’s when you get old. I’m just entering my prime right now, so I’ve got a lot to learn, and winning championships makes me hungry, and I need to be hungry to become better.

Doughty, on whether he’s grown as a player and a person:
Yeah, for sure. I’ve grown up a lot. The guys can tell you in here from when I was 19, 20 years old to now, I’m a completely different person. I still have the same amount of fun and stuff like that, but I’ve grown up. I work hard off the ice, I work hard on the ice, and I’ve learned how to become a leader.

Doughty, on whether he’s proud of Jake Muzzin for his role on the team:
Yeah, it was awesome. He obviously didn’t get to play too much, but he played in a couple games, and when he did play, he played well, but for him it was a great experience to meet some of the other guys, to watch what they could do on the ice. He’s a great teammate throughout the whole teammate too, even though he wasn’t playing. I’m looking forward to see how good of a season he’s going to have this year.