Camp’s been going on in El Segundo for quite some time, but Ontario’s version officially started on Tuesday. Here’s some notes from the first day at CBBA:

Of the players who cleared waivers on Tuesday, only goalie Peter Budaj remained in Los Angeles. Participating in Ontario were defenseman Vincent LoVerde, goalie Jack Campbell and forward Andrew Crescenzi. It’s big news for the Reign that their No. 1 goalie will be expected back for a second season after one in which he won the AHL goalie of the year award. Reign head coach Mike Stothers didn’t lose any sleep last night over the possibility of losing his top netminder though.

“No, I didn’t lose any sleep at all,” Stothers said. “If Budes had have got claimed, good for him. That’s what you hope for. He was our MVP last year, had a great year. You kind of hope on one side of ya says, ‘hey, I hope he gets picked up and he gets an opportunity to be back in the NHL, and that’s not to say he won’t. But I guess he’s headed our way eventually so I guess it’s good for us.”

There was no easing into camp the first day as end-to-end drills went on throughout the practice and a conditioning skate capped things off.

“I am who I am. I usually say what’s on my mind. I don’t want any gray area,” Stothers said. “I want them to know what the expectations are. We’re not in El Segundo for training camp anymore but we’re still in training camp. So, we’re a team that has some expectations and we want to still be playing in June. We do things the right way right from day one and we work hard. Guys that were doubled over today, I take that as a good sign. It means that they’re working.”

Added third-year forward Justin Auger: “As you saw we had a pretty tough practice to start the week off. Stuttsy’s setting the tone already and letting everyone know what kind of year it’s going to be like. … We didn’t expect anything else.”

Camp in Ontario is officially underway.

Good news on Zac Leslie, who was wearing two Nikes on his feet today and is no longer in a walking boot after a spill in the Kings vs. Kings game two Sundays ago in Ontario. He’s still not skating with his peers and is considered day-to-day as previously reported.

“He’s made great progress and we’re hoping that — it’d be nice to be able to get him in maybe that game on Monday [at Honda Center against San Diego], but we’re certainly not going to rush him,” Stothers said. “It was good news in the fact that it wasn’t nearly as bad as it looked. It was funny, there was nobody really around him when it happened and he just bit it, went into the boards, and then when you saw it on the replay it looked really awkward. It was little discouraging at first but he’s made some great strides and he’s improving … he’s walking around, like you would never know. Hopefully that progress will continue and [I’m] optimistic we’ll be able to see him on Monday.”

Spencer Watson remains out with a wrist injury that required surgery and Stothers used the words “long-term,” and “no timetable” to describe where’s he at, and it’s very possible that the diminutive sniper could head back to the OHL for his overage season. “It’s got to be a frustrating camp for him,” Stothers said of the forward, who is currently in Ontario. “He hasn’t been able to do a whole lot as far as with the collective group, he’s kind of been off on his own.”

Mike Amadio will wear No. 19 for Ontario this season. You may recall that Amadio wore No. 10 during his AHL playoff stint last season. No. 10 will be worn by Alex Lintuniemi, who has previously worn 45. Veteran forward T.J. Hensick, signed in the offseason, will wear 17.

The Reign will play their first preseason game at 10 a.m. in Ontario on Thursday as they host the San Diego Gulls. That time of day is usually when the Reign practice, not play. It will also be an “Education Day” game where students will be the main attendees.

“I’m actually looking forward to it. It’s right in my comfort zone, the earlier the better,” Stothers said. “Some of these guys probably have to set two or three alarms to be here for a 10 o’clock start but for me I think it’s great. We’ll have some screaming kids, I’m sure they’ll be some energy in the building and it’s something different. It’s out of the norm, so what the heck, give it a try, see how it goes. We can have a look at some of the guys we saw here today and it’s good, I don’t mind.”

Jordan Samuels-Thomas, a fan favorite a season ago, is in camp with San Diego. Former Defenseman Jeff Schultz was picked up by the Ducks’ organization as well in the offseason.

“What are they taking all our guys?” Stothers said. “Still couldn’t get used to seeing Schultzy in a Ducks jersey, just didn’t seem right.”

Stothers joked that he told Schultz that he would never speak to him again, but followed that he was happy that both were getting an opportunity to continue their careers, wherever it may be.

A jack of all trades as Stothers likes to call him, veteran Paul Bissonnette filled in on defense during the first session.

Here’s a look at the most updated camp roster as of 3 p.m. PT on Tuesday (jersey numbers for all!). See below or click here: 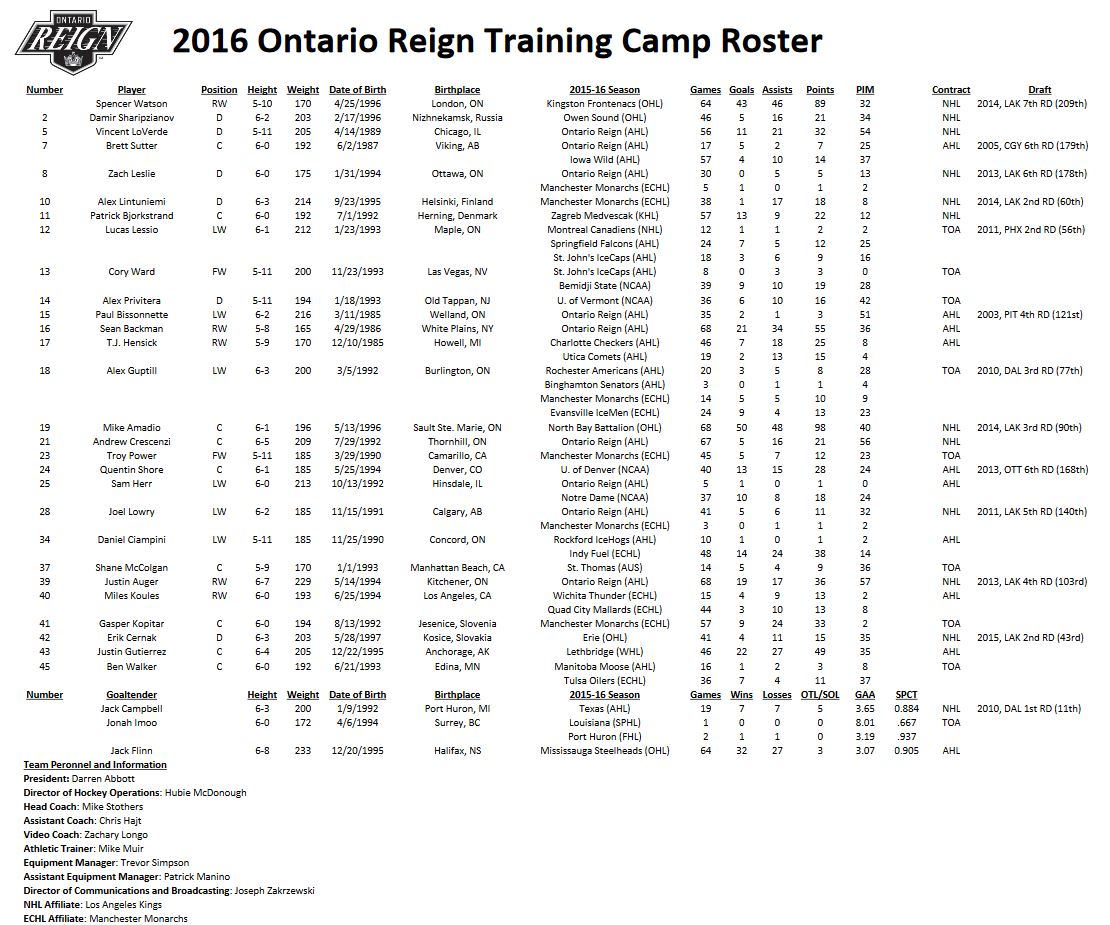