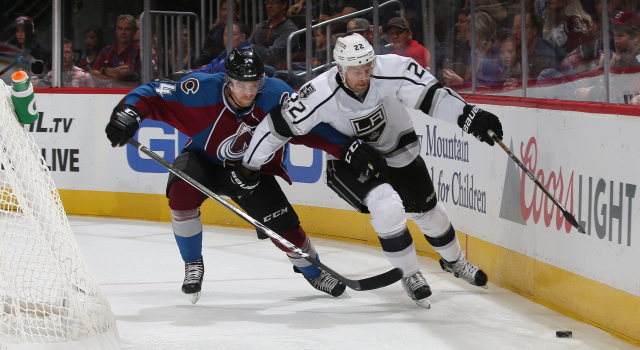 Good afternoon from the taxiway at Denver International Airport, where we’re expecting a two-hour and 13-minute flight up to Kelowna before we bus up to Vernon, B.C. I’m planning on writing a story on Brayden McNabb and his summer work with a skating coach, and should have some updates from a league function in Lumby, B.C., the city whose Pat Duke Memorial Arena will benefit from the Kraft Hockeyville grant.

-Nick Shore, who didn’t return to last night’s preseason loss to Colorado after he “fell awkwardly,” according to a hockey operations source, has returned to Los Angeles to continue evaluation. In speaking with Darryl Sutter after practice, the dreaded term “protocol” was used to describe the evaluation process, so Shore may have experienced a potential head injury. Needless to say, he won’t play in either split-squad game tomorrow.

-In Shore’s absence, it’s would appear as though either Patrick Bjorkstrand or Paul Bissonnette would draw into the lineup. I’ll share the morning skate lines early Sunday morning from Vernon.

-As for the group that remained in Southern California, it’s possible, though not a certainty, that Jonathan Quick could see some time in net against Anaheim. Whether he plays tomorrow will be Quick’s call. Sutter explains this below.

–Via Eric Stephens of the Orange County Register, Jonathan Bernier is expected to start in net for Anaheim at Honda Center tomorrow.

Darryl Sutter, on communicating with coaches and staff with the group in L.A.:
Just review the game last night with the coaches. We’re able to send it to them through the house feed that we get, so they watched it this morning just to review it and have their own opinions on individuals, practice plans. We know what we’re doing. [Reporter: So no real cramp on anything?] Well, it’s a real cramp, quite honest, because you’re not seeing half the guys, which is not the ideal way of doing it halfway through training camp.

Sutter, on Brayden McNabb:
We’re counting on Brady to really step his game up. It’s no different than when we talk about guys who’ve got to produce more offensively. We’re counting on Brayden to be a much better defender and a much better puckmover this year, and because we think he’s capable of doing that, and he wants to do it, and he’s a good competitor – all of those things. So it’s the time in this stage of his career to take that next step.

Sutter, on whether Jonathan Quick might see some time against Anaheim on Sunday:
It’s sort of his call on tomorrow. That’ll be the coaches’ call in Vegas, but tomorrow’s more Jonathan’s call.

Sutter, on the schedule of players returning from the World Cup:
They’ll come back, we’ll talk to them on Monday and we’ll go from there. Quite honest, I don’t see Drew playing anymore, and we’ll see if Kopi – the only reason I’d want to play him a game is because we don’t know who the hell we’re playing with him yet, and it’d be good for him to see that and be able to play with him, and obviously Muzz hasn’t played much, and he’s going to have to play a couple games.