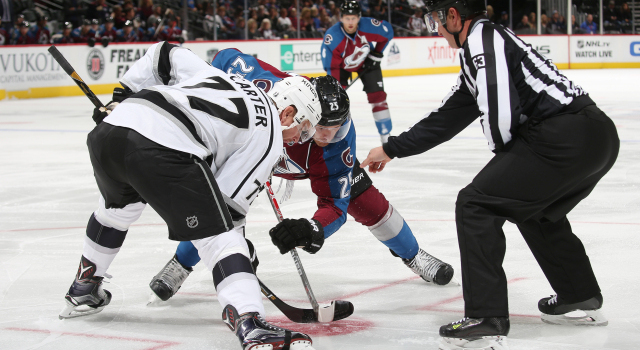 Darryl Sutter, on Jeff Carter’s line and his first preseason game:
The line really didn’t play together much. Jeff, for being off five months, played pretty well.

Sutter, on whether he was happy with the five-on-five play:
Yeah. We made a mistake four-on-four, lost a defenseman, and took a penalty when killing a penalty, and we had lots of chances. We were good in the offensive zone, I think. You’re not going to win scoring one goal, and you’re not going to win giving up three.

Sutter, on Paul LaDue’s game-by-game progress:
I think tonight was not progress. I think he looked tired. He’s played a lot of hockey for us. The kid has played really well. I think he played with a lot of composure again tonight. It’s just you’re expecting more out of the other guys so he doesn’t have to play that much.

Jeff Carter, on whether he got what he needed from his first preseason game:
They’re never easy. It’s been a while since we’ve played. It’s nice to get out there and get into more game-like situations, a little more structure. Just got to keep building on it. It’s a step in the right direction.

Carter, on what he’d like to see progress in his next preseason game:
Just make some plays. I think tonight was more just trying to get the legs going. Anybody can skate in straight lines. It’s when you start getting leaned on, and starting to battle is when you feel it. So I tried to get that going a little bit tonight, and hopefully try to create some more plays and play with the puck a little more next game.

Carter, on re-cultivating chemistry with Tanner Pearson and Tyler Toffoli:
We’ve played together long enough. We know what’s going on. I think all three of us, they played a couple more games than me, but everybody’s just trying to find their games right now. We’ve got three left, so we’ve got some time, but it’s coming quick, so start ramping it up.

Paul LaDue, on his progression through his first three preseason games:
I felt pretty good out there. Obviously I would’ve liked to get a win, but I’m feeling more confident as the games go on shift after shift and just trying to get better. There’s still a lot of room to improve. I’ve still got to slow the game down. It’s a fast pace out there, but overall I felt pretty good.

LaDue, on what he has noticed about the NHL’s pace:
You’ve got to be thinking all the time. You can’t let the game come to you, you’ve got to know where you’re going before you get the puck, and everyone’s so good at reading defensively, so you’ve got to be sharp throughout the whole game. There’s no shifts off, and like I said, I’ve just got to take what I learned from each game and try to get better.

LaDue, on any advice he’s heard from the team’s veterans:
All these guys have been really supportive with all rookies. They’ve been great, and I know they’ll continue to help me out, and I’ve just got to listen to what they say and keep moving forward.