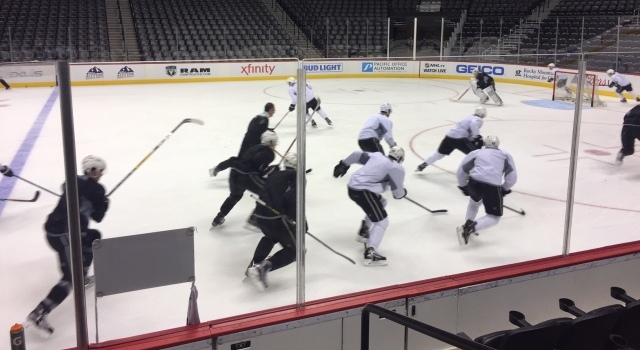 Good afternoon to you from the base of Mt. Loud. If you are unfamiliar with Mt. Loud, it is The Peak of Noise. Don’t try to find it on any maps.

The Kings took the ice at the Pepsi Center shortly before 11:30 a.m. and aligned as such:

-Welcome back, Jeff Carter. The veteran forward is expected to make his preseason debut after undergoing a lower-body injury in training shortly before World Cup camps opened. I’ll look to speak with him for a few minutes after today’s game to gauge his progress after his first exhibition game.

-Slated to play in their third preseason game: Tom Gilbert, Nic Dowd, Kyle Clifford, Teddy Purcell, Paul LaDue, Derek Forbort, Matt Greene, Kevin Gravel and Michael Mersch. I spoke with Gilbert about how many games he needs in the preseason before he reaches a level of comfort with a new team, and he told me, “Obviously as many as you can is probably the best way to do it. If it’s good for you not to play every preseason game, probably not. But four or five is probably a good number to get used to systems and new guys.” He says he feels good after having played two games thus far; Gilbert leads the team with four points (all assists) this preseason.

-No, tonight’s game is not televised. Nick and Darryl will have the audio call on AM 790, and I’ll host the running live blog.

Nic Dowd, on his line’s success against Anaheim, and what he’d like to see tonight:

Kyle Clifford, on working with Nic Dowd and Teddy Purcell this preseason:
Obviously those are two skilled guys who move the puck really well, so my job’s just to go to the net and get open. They obviously have good structure and good detail, and that’s a big thing for our line to have success.

Clifford, on the next step he’d like to see in the third preseason game:
Just getting a better feel for the puck. I think the last game the detail and the execution was there. Now it’s just bringing it all together.

-Later today I should have a story up on Tanner Pearson and a wrap-up photo gallery from the World Cup. Enjoy your Friday, Insiders…

If only there was a name for this line…