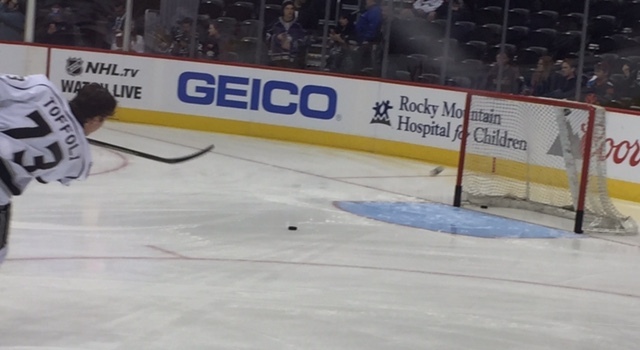 THIRD PERIOD
20:00: And we’re off. Kings continuing to give Paul LaDue a long look. Most ice time on the Kings through two periods.
19:00: Big open ice hit by Elson on Lewis.
16:05: More stickhandling out of trouble by LaDue, though his pass through a couple of skates in the neutral zone was a bit high-risk.
15:35: Varlamov shuts the door on Toffoli’s five-hole attempt from the lower part of the right circle.
14:13: Rene Bourque catches the inside of the post from the left circle.
13:08: MacKinnon catches an edge while unleashing a shot off the rush and slides hard into the boards. Oof. He appears to be OK.
12:48: PENALTY COL. Retaliatory slash by J.T. Compher, who was stripped of the puck by Gravel on a rush into the L.A. zone and didn’t take kindly to it. Not sure why the closer referee didn’t call it.
6:30: Game getting a little chance-tradey at both ends.
5:03: PENALTY LAK. Dowd for kneeing. Minor.
3:03: Good pressure by Colorado on the kill, but no shots on goal.
1:46: Closing up shop. Let’s talk soon, Insiders.

SECOND PERIOD
20:00: Let’s do this.
19:28: PENALTY LAK. Toffoli for slashing.
18:42: Nice dive by Crescenzi to get his stick on the puck and clear the zone.
18:21: PENALTY LAK. Clifford for tripping. 54 seconds of 5-on-3 hockey.
17:21: GOAL COL. 3-1. LaDue gets caught a bit behind the play, and when McNabb steps up to make a hit, that leaves Grigorenko all alone in front with the puck on his stick. For the second time tonight, he scores upstairs with a backhander.
17:00: Mersch gets his stick on a puck near the net but doesn’t have an angle to slide it past Varlamov.
15:23: PENALTY COL. Compher for holding the stick.
13:15: Lewis finds a seam in the defense, but catches iron from the left circle. B-plus scoring chance.
12:50: PENALTY COL. Prepare for lots of penalties early in the season, as is tradition. Lindholm for interference.
10:53: First real scrum of the evening. Bigras takes offense to Clifford’s attempts to knock a puck loose from Varlamov, who made a save on Brodzinski’s wrister.
10:31: Campbell in for Zatkoff, who stopped 7 of 10 but saw a bunch of high-grade looks. HERE COME THE HOTSTEPPER ALERT
10:25: PENALTY LAK. King for hooking.
8:59: Campbell’s first shot faced is a high-grade chance from Grigorenko, who shot off Greer’s pass and was looking for his third of the night. Denied, no rebound.
7:48: Always a fun playlist in Denver. Now it’s Weird Al’s Eat It.
6:54: Ouch – Teddy Purcell got tangled up in a puck battle and appeared to take a skate boot to the face. He went down the tunnel for a quick repair and is back on the bench.
4:33: Siemens tried to line up Mersch for a big hit, but Mersch stands his ground to weather it. Good balance.
3:15: Carter loses the handle of the puck in the offensive zone. Elson scoops it up and skates in on an angled, contested break and appears to catch the post.
0:00: Dunzo.

FIRST PERIOD
20:00: We are rolling.
18:10: Jonny Brodzinski – one of three St. Cloud State products playing for the Kings in this game, fires off the first shot off the rush from the right wing. Varlamov knocks it down, covers. I hope you’re having a great evening.
17:20: Dowd wrister from the high slot is fought off by Varlamov. Play goes on in the other direction.
17:12: Anyone know why Avs fans chant “that our flag was still there!” in unison during the national anthem? I could probably Google this, but I’m lazy.
16:23: Nice Brodzinski deflection travels just wide of the net.
15:12: Greene’s clapper from the top of the point deflects off Johnson’s shin pad, travels just wide.
13:53: GOAL COL. 1-0. Off the rush, Rene Bourque feeds a slot-bound MacKinnon, whose one-timer nicks Gilbert’s skate and deflects past Zatkoff.
13:08: Nice, calm play by LaDue to avoid a forechecker, use the boards to offer a breakout feed that turned into a rush opportunity the other way.
11:17: PENALTY COL. Martinsen for hooking. Going out on a limb to say that won’t be the last time he’s whistled for an infraction this year.
9:17: No goal on the power play, but pressure throughout. LaDue’s wrister early in the man advantage was stopped by Varlamov; Carter’s slapshot from the high slot 20 seconds later deflected high.
8:47: PENALTY LAK. Gilbert for tripping. Called by the referee farther from the play, for what it’s worth.
7:51: PENALTY COL. High-sticking on Johnson.
7:28: GOAL COL. 2-0. Grigorenko stickhandles his way away from Dowd and into the high slot, where no one steps up to greet him. His backhander beats Zatkoff up high. Impressive individual effort.
2:58: Nice hit in the corner laid by LaDue on Gabriel Bourque, one of three Bourques in the lineup for Colorado.
1:03: GOAL LAK. 2-1. On a delayed call, Lewis gathers a loose puck from behind the net, steps out unimpeded in front of the net, and beats Varlamov between his left pad and the far post. The impending penalty would have been assessed on Martinsen, who caught King up high with a so-so hit.
0:00: End of the first. To the radio! 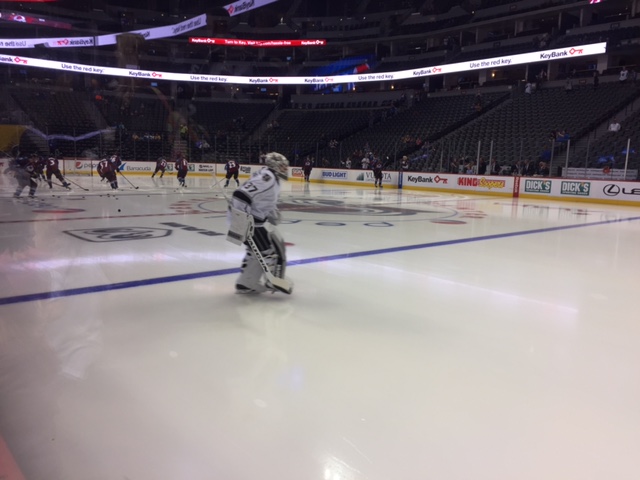 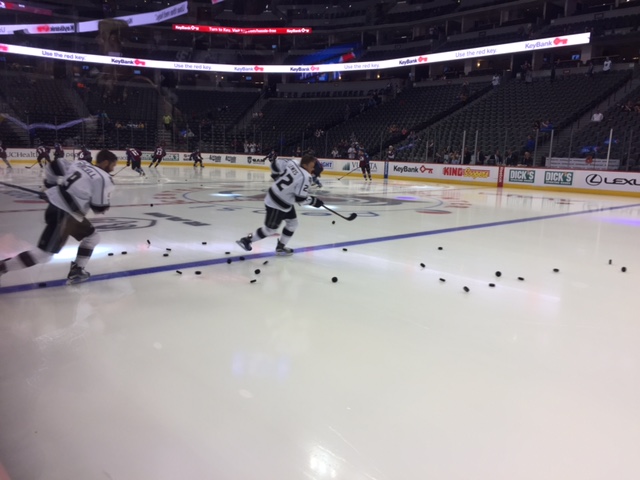 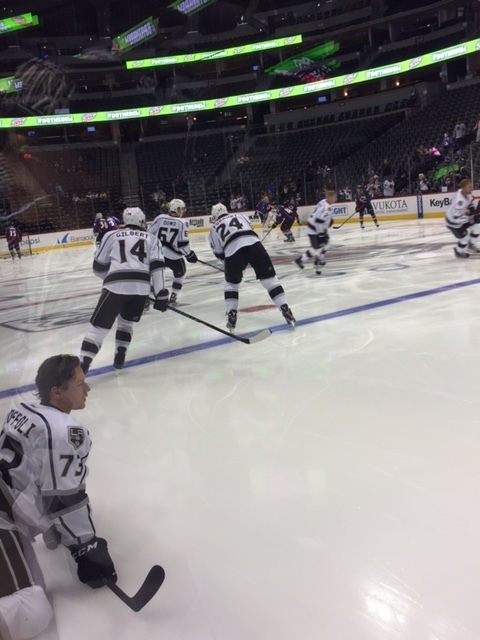 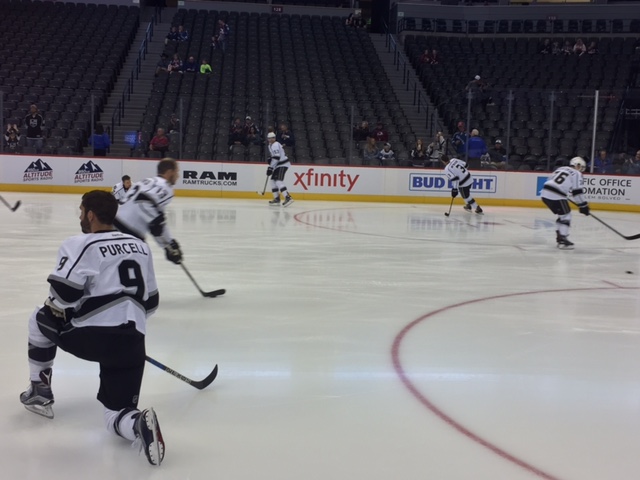 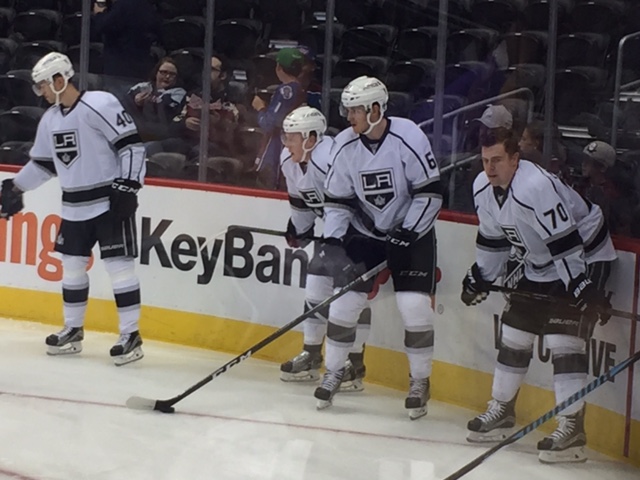 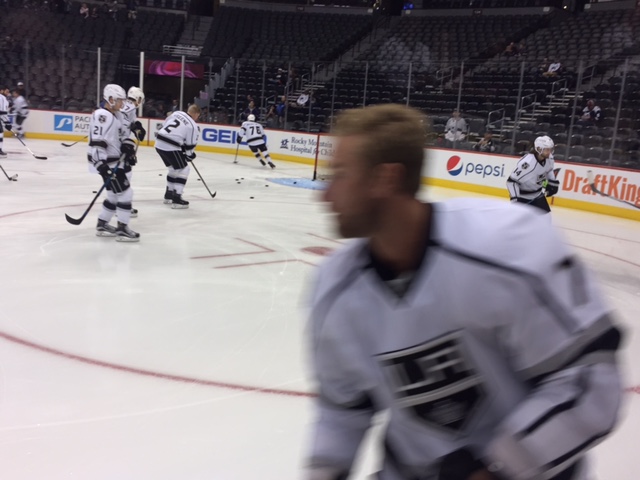 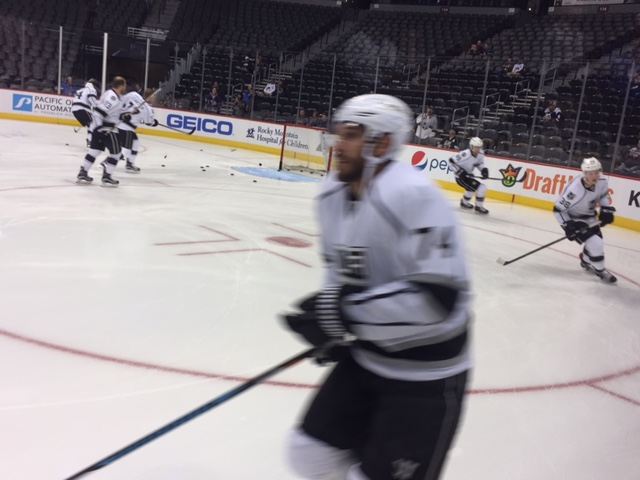 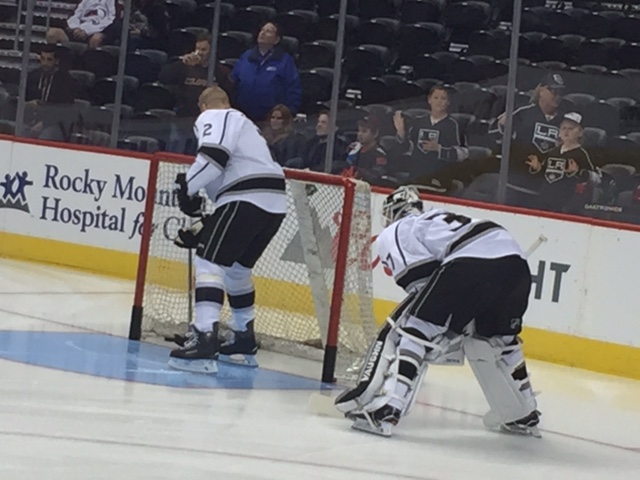 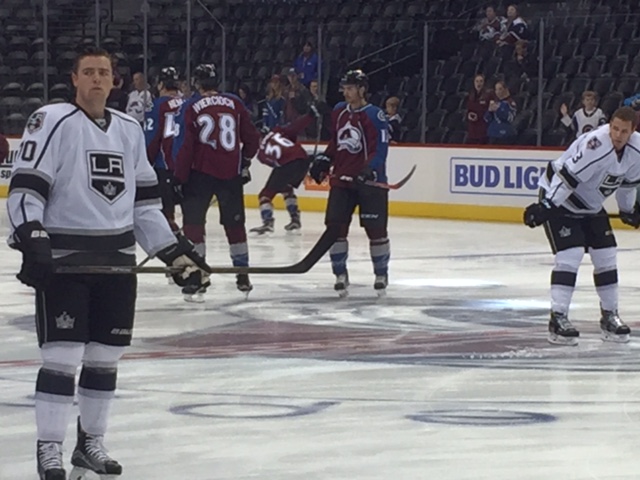 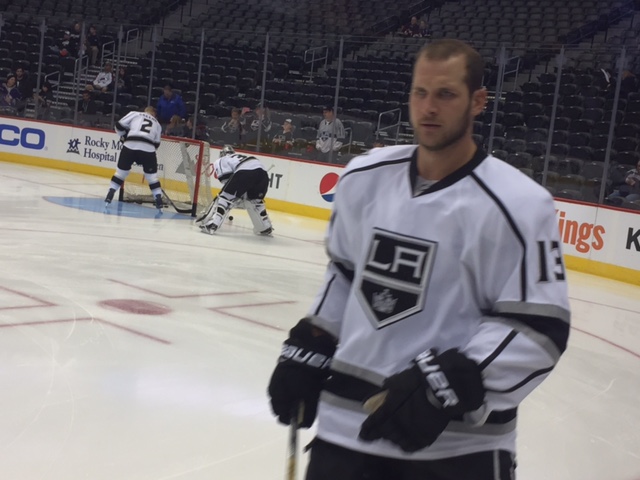