Vying for a full-time role, Mersch regarded as great student 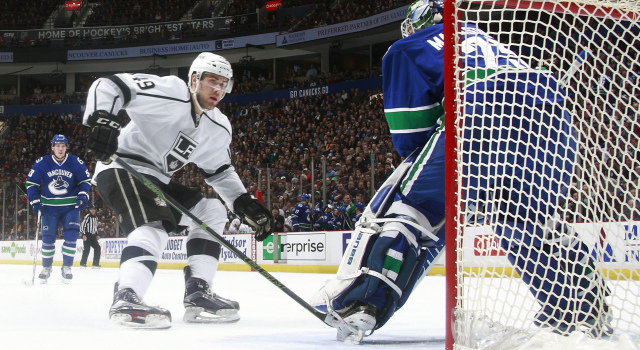 Michael Mersch, he of the 17-game, one-goal, three-point stint with the Kings last season, is vying for permanence on this year’s Kings roster.

Based on the sentiment coming from the team at the end of last season, Los Angeles appears to be more willing to offer some depth positions to its younger players coming up from the American Hockey League than in previous training camps. On the other hand, Mersch is still on his entry-level contract and can be assigned to Ontario without having to clear waivers.

Mersch isn’t expected to contend for a top-six role, though Marian Gaborik’s injury doesn’t exactly place a barrier in the way of the Chicago-area native who plied his trade for the U.S. National Team Development Program and the University of Wisconsin before transitioning smoothly to the AHL, where he has totaled 48 goals in 135 games.

“I think it all depends on you and how you perform,” Mersch said. “Whether there are openings or not openings, it’s the way the game is, so you just want to play the best and feel good about your game personally, and hopefully it reflects on the ice.”

He has been putting in the time to ensure he shows his best effort. Mersch has worked regularly and in extended one-on-one situations with assistant coaches and, prior to the start of training camp, skill retention coaches to ensure that the aspects of his game prime for refinement, such as his skating, can continue to develop as he matures into what he and the team hope will be a fruitful NHL career.

“I’m good in front of the net,” Mersch said. “Got to keep working on that stuff, but [also] the bigger parts of my game, transition skate … and getting up the ice. That’s a big thing for me. I work on the power skating, I put a lot of time and effort into that. Keep working at it, keep grinding away, and hopefully it’ll become just a habit.”

He has built up a special relationship with Ontario coach Mike Stothers, and it’s clear that the team’s development staff also holds the soon-to-be 24-year-old in high regard. Director of Player Development Nelson Emerson praised Mersch for his willingness to add more detail to his game. Referring to Mersch as “one of the best students we’ve ever had,” Emerson credits the winger for absorbing all that has been taught and asking appropriate questions during his extended developmental sessions.

“I’ve always felt fortunate that I’ve been drafted by this organization because they play a heavy type of game, and that’s the way I’ve kind of learned to play, so I think they kind of correspond there a little bit,” Mersch said. “But, obviously, there’s a lot of very good, skilled guys who make a lot of really good plays.”

Mersch, who looks to refine the more skilled aspects inherent in the modern NHL, uses both technology and traditional instruction to bring out some potentially uncovered aspects of his game.

“I think power skating has come a long way in the past five years since my freshman year of college to now, just within the whole game of hockey,” he said. “There’s not much dragging stuff and you’re not carrying things behind you to get going. It’s just fundamentals, a lot of video instructions. Especially with iPhones now, it’s crazy – you can get great video and slow motion just on your phone, so it’s made it a lot easier and you can watch yourself. Just doing drills that apply to games. It’s crazy how far it’s come.”

Michael Mersch, on the competition at forward this preseason:
First of all, going to the competition, you’re competing with guys, but at the same time, they might be on your line that day, so it’s a different type of competition, but its still good. For me, I think just getting to the net, being good on the walls and making the right plays. At this level, you’ve got to be ready at the beginning of practices and the beginning of games, and your ice time probably goes up or down from there. Focusing on the first shifts, making a good first play, and building on that type of stuff – that’s the way I look at it.