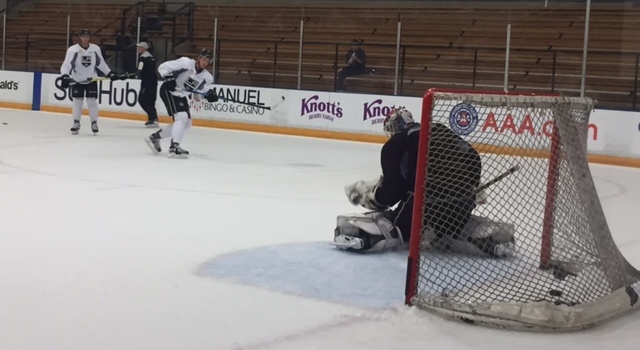 Good morning from Toyota Sports Center, where today’s non-game group is finishing up a practice. At 10:00 a.m., the group that will face the Anaheim Ducks at Staples Center took the ice and aligned thusly:

-No lines or pairings remained on the ice for extended work, so it’s difficult to get the firmest sense of who will sit this one out. Kurtis MacDermid and Paul LaDue took the first rotation together, so Damir Sharipzianov is probably out tonight. Peter Budaj was the first goaltender to leave the ice, so he’s likely to get the nod. Either Jack Campbell or Thomas McCollum will back him up.

-Speaking of goaltenders, Jonathan Quick took the ice this morning for his first Kings practice of the season. Don’t expect him to play tonight; Darryl Sutter has previously referenced a heavier workload for Quick at Frozen Fury.

-Jeff Carter isn’t expected to play tonight but should return to the preseason lineup soon. When I asked him two days ago how many exhibition games he’d ideally like to get into, he said four. We’ll see if that’s possible given the team’s condensed schedule this week, followed by a mostly open week in advance of Frozen Fury, but there doesn’t appear to be any grave concern that he won’t get his work in prior to the start of the season.

-Get ready for your Jeff Schultz reunion:

The Ducks played their freshman squad (as is the norm in preseason openers) and lost 2-1 to the Coyotes at Honda Center last night.

-More to come in a little bit, including a story on Michael Mersch, who’s in a battle to make this Kings team. Stay tuned…