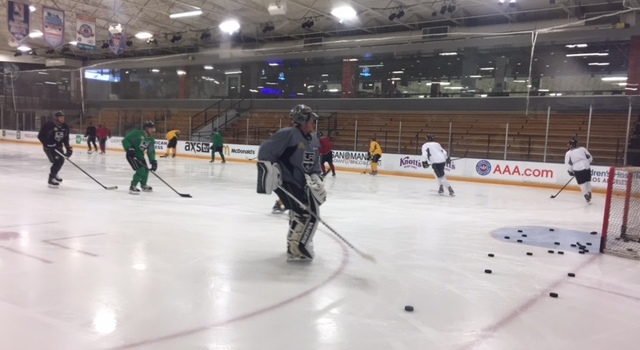 Jonathan Quick returned to practice with the Kings after a World Cup of Hockey experience he repeatedly described as “disappointing,” depicting a sour taste that hadn’t appeared to fully dissipate from the ultracompetitive goaltender’s mouth.

The tournament has come and gone for the Americans, and now preparation for the NHL season begins in earnest. Darryl Sutter said that the team is in the process of establishing a schedule to best prepare the goaltender for the regular season, which opens two weeks from today.

“Yeah, I’ll sit down with him,” Sutter said. “He’s got to play games, but … if we wait ’til Vegas, we’ll just see. The schedule, if you look at all these games this week, and then we have basically two games in two weeks almost, so he’s got to get it in sometime. So just not really sure – we haven’t really talked with him about it much, but we will. Tomorrow, I mean, he’s going to stay here and practice, and we don’t play until Sunday, and then not until the following weekend. He’s going to have to get some game in somewhere.”

Quick downplayed any change or extension of his off-season training regimen to prepare himself for an earlier return to game action than usual. He appeared in the first World Cup exhibition game on September 9.

Speaking with reporters shortly before joining a team meeting, Quick was ready to move on from the tournament and reconnect with the teammates with whom he will be playing alongside this season.

“I’ve got a lot of guys here that I’ve played with for years and years, so it’s always good to see their faces and hang out with them,” he said.

Darryl Sutter, on what he’d like to see evolve tonight after Monday’s preseason openers:
Continue to work on the details – system detail. Guys that have to make some adjustments in terms of where we want ‘em on the ice. Did a lot of that with video this morning, the last two days, working on stuff. Obviously also players that we’re giving them good opportunities this week to see who comes out of that, that sort of thing. Obviously we’re starting to fit – Quickie practices today. See where he goes, and just kind of go from there.

Sutter, on whether the preseason allows younger players to acclimate to an NHL pace:
There’s not really, other than three or four guys, that have not played a pro game or an NHL game. I think it’s clear – obviously I wasn’t at the game in Phoenix – but I think the first game here it’s clear that guys can handle the pace and guys that haven’t, so it’s a good opportunity, especially the split squad game, for your first-year pros to just see how they handle it and get ‘em to play in an NHL building.