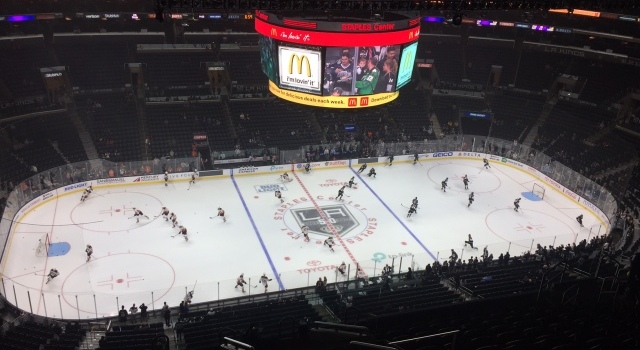 THIRD PERIOD
20:00: As you were.
17:00: McCollum stops Boll’s backhanded attempt from just outside the crease.
16:10: Gravel covers some ground quickly to take time and space away from Wagner, who nearly had a step past L.A.’s D.
11:55: GOAL ANA. 4-1. Montour’s wrister from the right point finds a hole through traffic and McCollum.
11:48: PENALTY ANA. Ritchie for high-sticking.
10:34: GOAL LAK. 5-1. Brown bangs in a loose puck pinballing through the low slot after his first attempt was denied by Danis. Setoguchi receives the primary assist.
6:40: Great McCollum sliding left pad save on Theodore, who had a good opportunity on a rebound.
5:52: PENALTIES LAK. Nolan whistled for roughing. Four minutes. Was behind the play; appeared to get tangled up with Bickel.
4:47: SHG LAK. 6-1. Just Auger makes a strong play to use his condor-like wingspan to stick check a puck away from the left point, setting up a two-on-one. His shot is stopped by Danis, but Andreoff joins the rush and uses his momentum, and his skate, to put back the rebound. No kicking motion, not that there was a review.

SECOND PERIOD
15:11: Apologies for the delay. Got caught up with some bloggers on the upper concourse after joining Nick on radio. The Kings didn’t convert on their first power play, or their second power play when Chris Wagner was sent off for hooking, but after its expiration…
14:49: GOAL LAK. 3-0. Justin Auger picks up a loose puck to Tokarski’s right, drives the top of the crease, and uses his condor-like wingspan to tuck it around the goalie’s left pad.
14:05: PENALTY LAK. Greene for hooking. His second minor of the game.
12:05: Penalty over.
11:27: Penalty ANA. Morley for holding.
10:42: Tokarski denies Dowd’s one-timer off a Purcell feed. Nice NoDak power play pairing of Forbort-LaDue.
9:29: McCollum replaces Budaj (14/14). Danis replaces Tokarski (25/28).
8:50: Nice job by Andreoff to win a puck battle in the defensive zone and spring Nolan loose for a chance with a backhanded saucer pass, but there was just a touch too much muscle. By the time Nolan caught up to it, there wasn’t much of an angle. Fired wide.
8:41: PENALTY ANA. Ritchie for slashing.
4:20: Crescenzi trucked Despres in the offensive zone.
3:25: McCollum denies Noesen’s close-range redirection. Good save.
3:05: Brown sprung for a partial break. Pad save, Danis.
1:58: GOAL LAK. 4-0. After knocking down Danis’ clearing attempt, Dowd finishes off a very good shift by calmly picking up a bouncing rebound of Greene’s point shot, striding to his right, and backhanding it into an open net. His second goal of the night.
1:25: Clifford generates a break but loses the handle in close range. Danis still has to make a save.
0:00: End of the second.

FIRST PERIOD
20:00: And we’re underway.
18:25: Shots on goal reads 21-0 in favor of the Kings. Hits are 14-1. Checking on the validity of those numbers…
17:20: Forbort firing away. Already three shot attempts through two shifts, by my own calculation.
16:40: Some rebounds to be had in front of Budaj after three quick shots, but the Ducks can’t pounce.
14:45: Big hit by Clifford (on Cramarossa?) while battling for a loose puck in the offensive zone.
11:38: GOAL LAK. 1-0. After Nolan’s zone entry, MacDermid gets a low shot through a few bodies that Tokarski knocks down. Dowd’s first backhanded attempt was snuffed out by Tokarski, but he lifts a second backhand underneath the crossbar to give the Kings the lead.
8:50: Gilbert beaten by Bickel for a loose puck on a one-on-one battle in the Kings’ defensive end. Bickel turns it into a scoring chance.
8:26: GOAL LAK. 2-0. Setoguchi hammers one from the right point top shelf past Tokarski. Didn’t appear to be a screen.
7:07: PENALTY LAK. Greene for interference.
5:07: Not a ton going for Anaheim on the power play.
4:00: Nice strip of the puck by Setoguchi in the offensive zone. He feeds Kempe, who rings it off the inside of the post from the slot.
3:30: Shooting gallery against Tokarski continues. 20 shots on goal through 16:30 of action.
2:12: Dangerous cross-ice pass by Mersch on a defensive zone exit, but the Ducks can’t take advantage of it.
0:07: MacDermid-Bickel scrap. This is some carry-over from the Reign-Gulls rivalry.
0:07: PENALTY ANA. Bickel for slashing. Bickel, MacDermid also go off for fighting. LAK power play acomin’.
0:00: End of the first.

A quick podcast that Jesse Cohen and I recorded at practice yesterday: 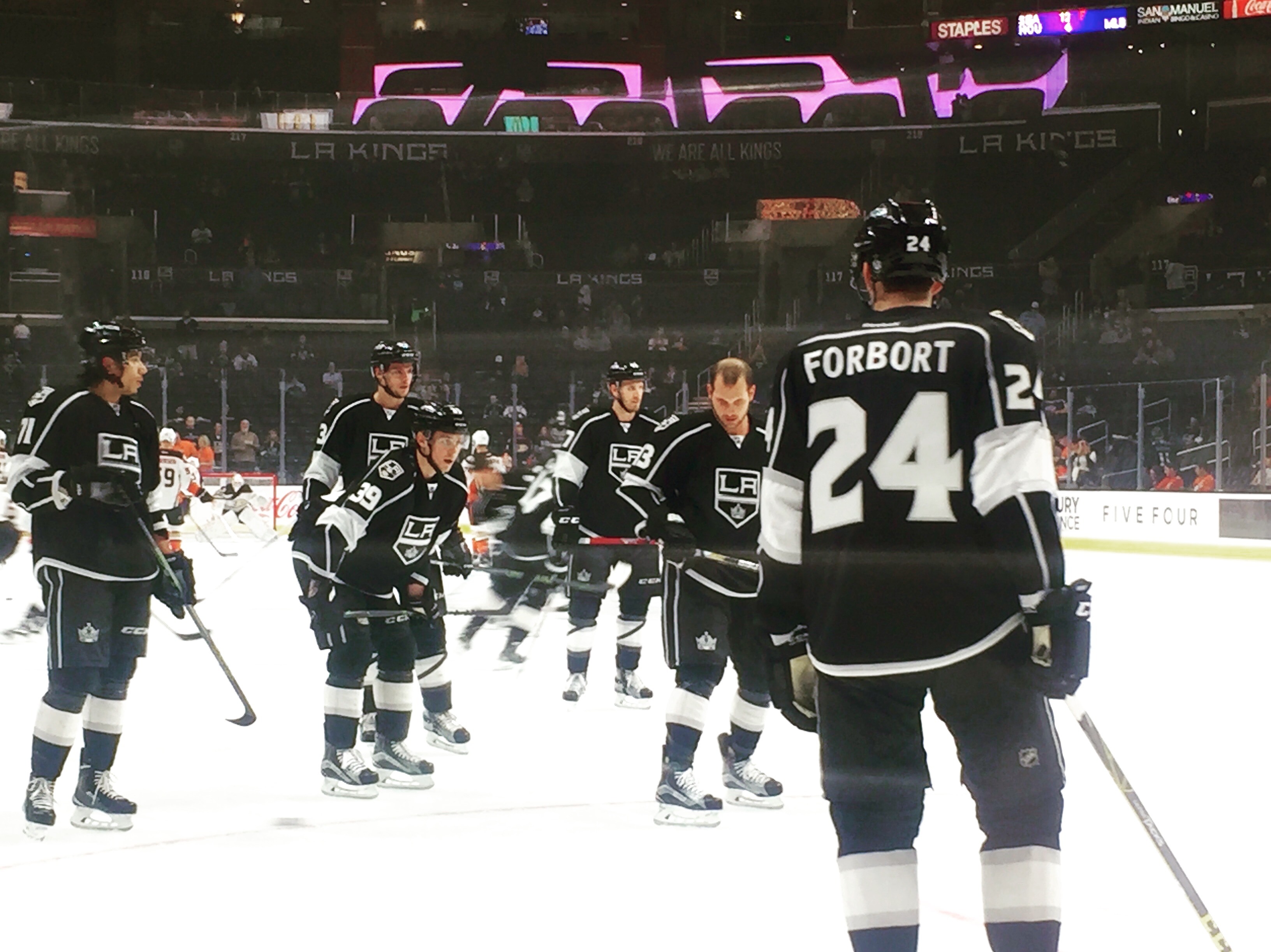 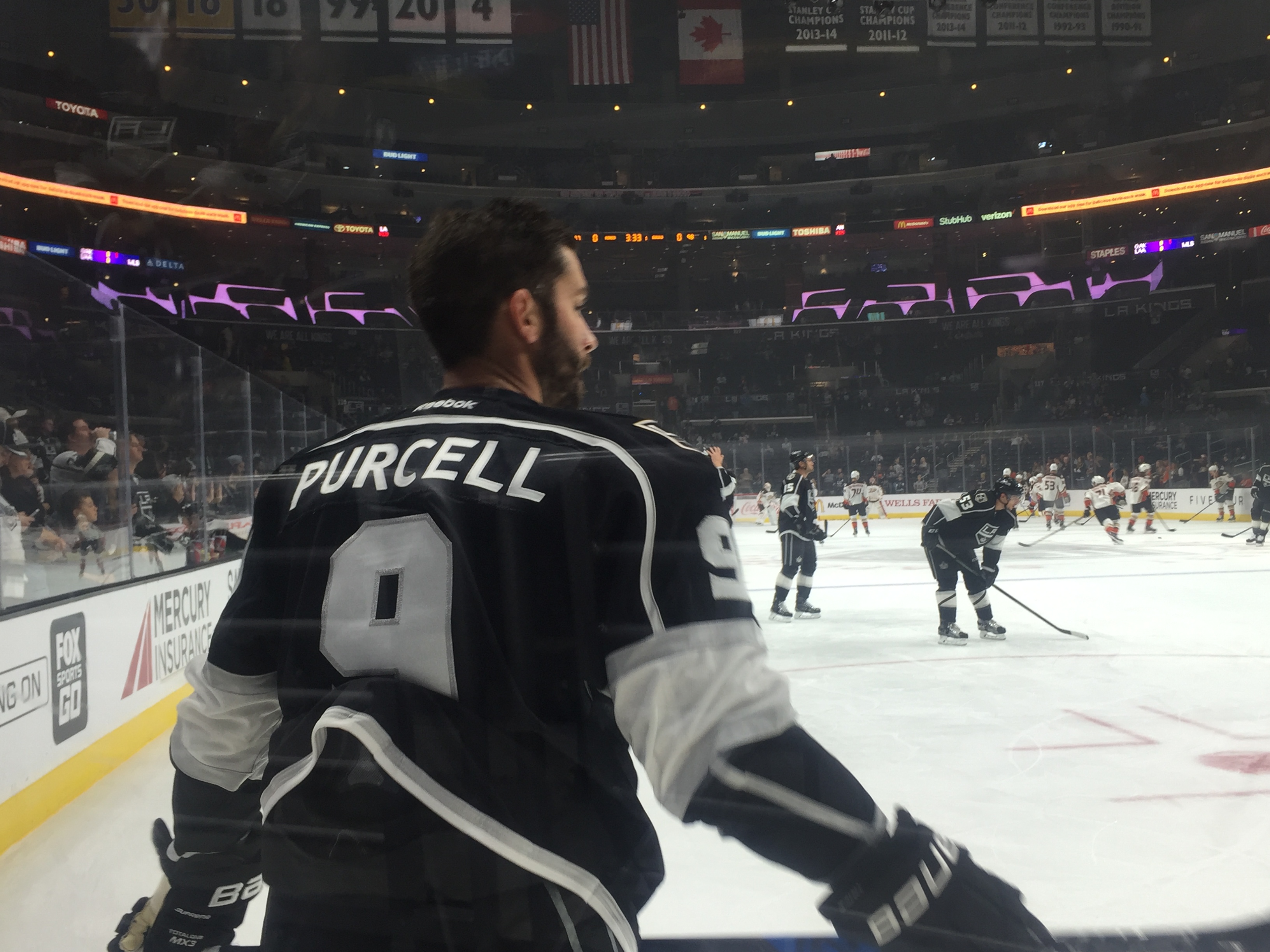 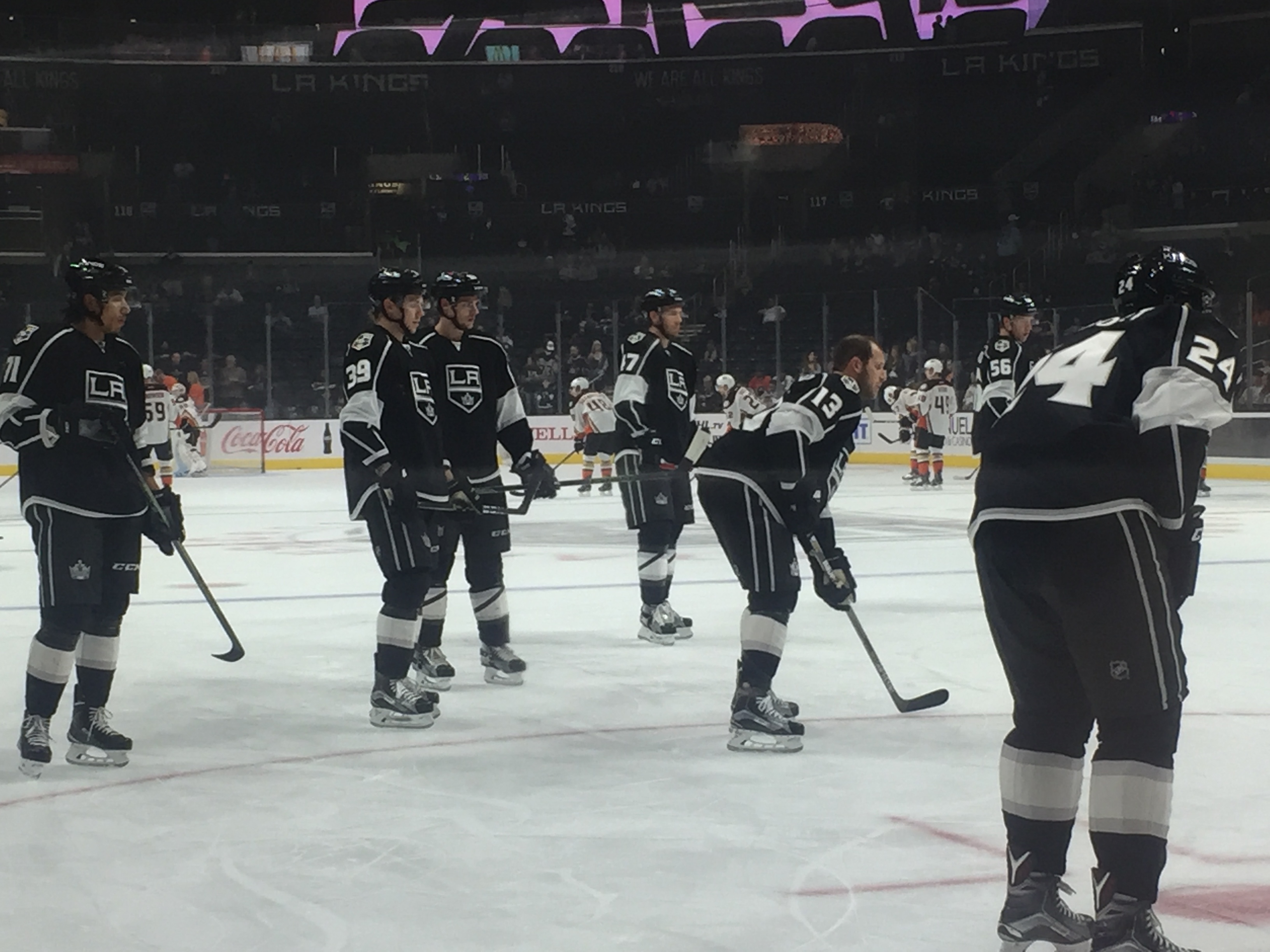 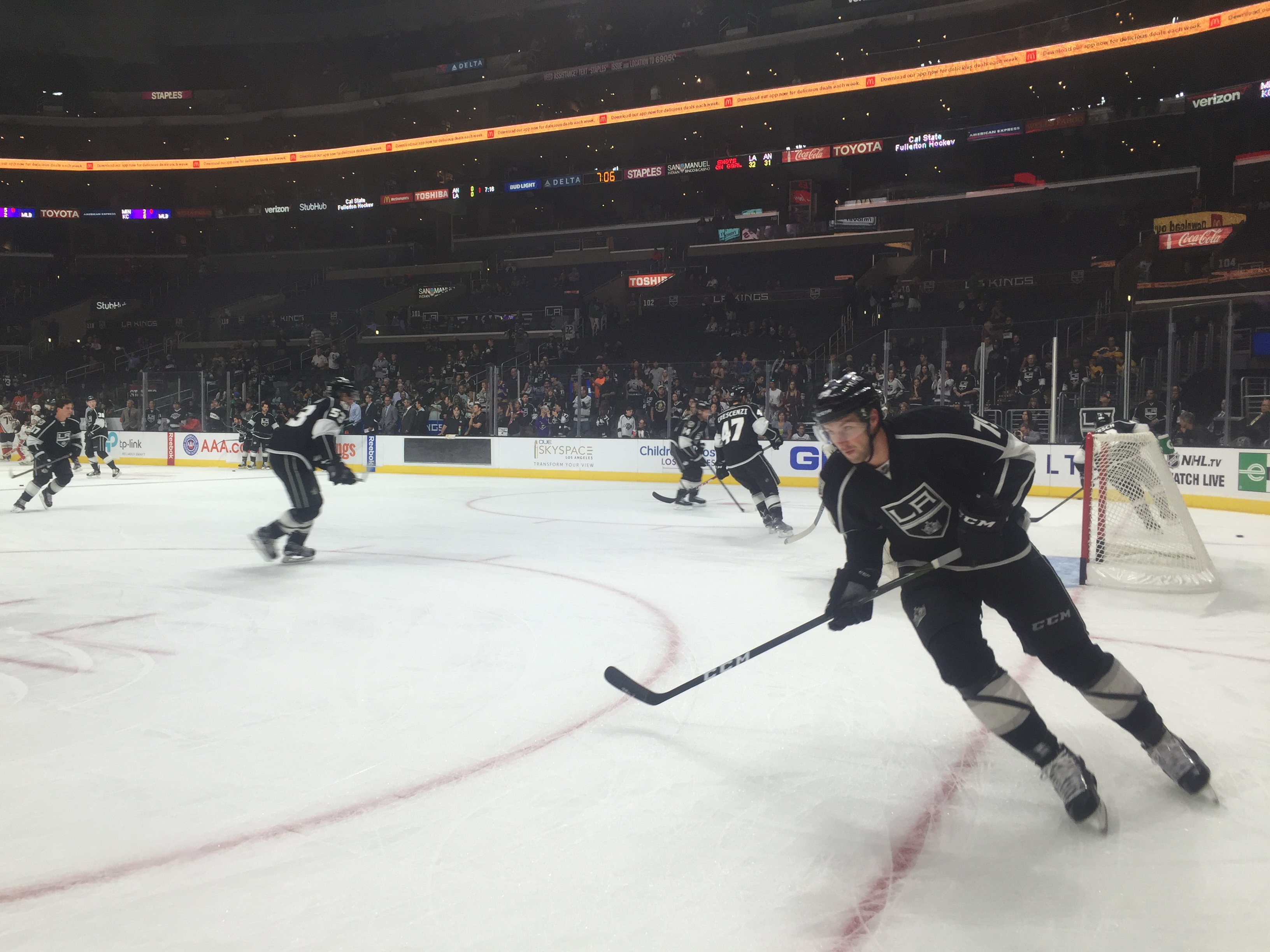 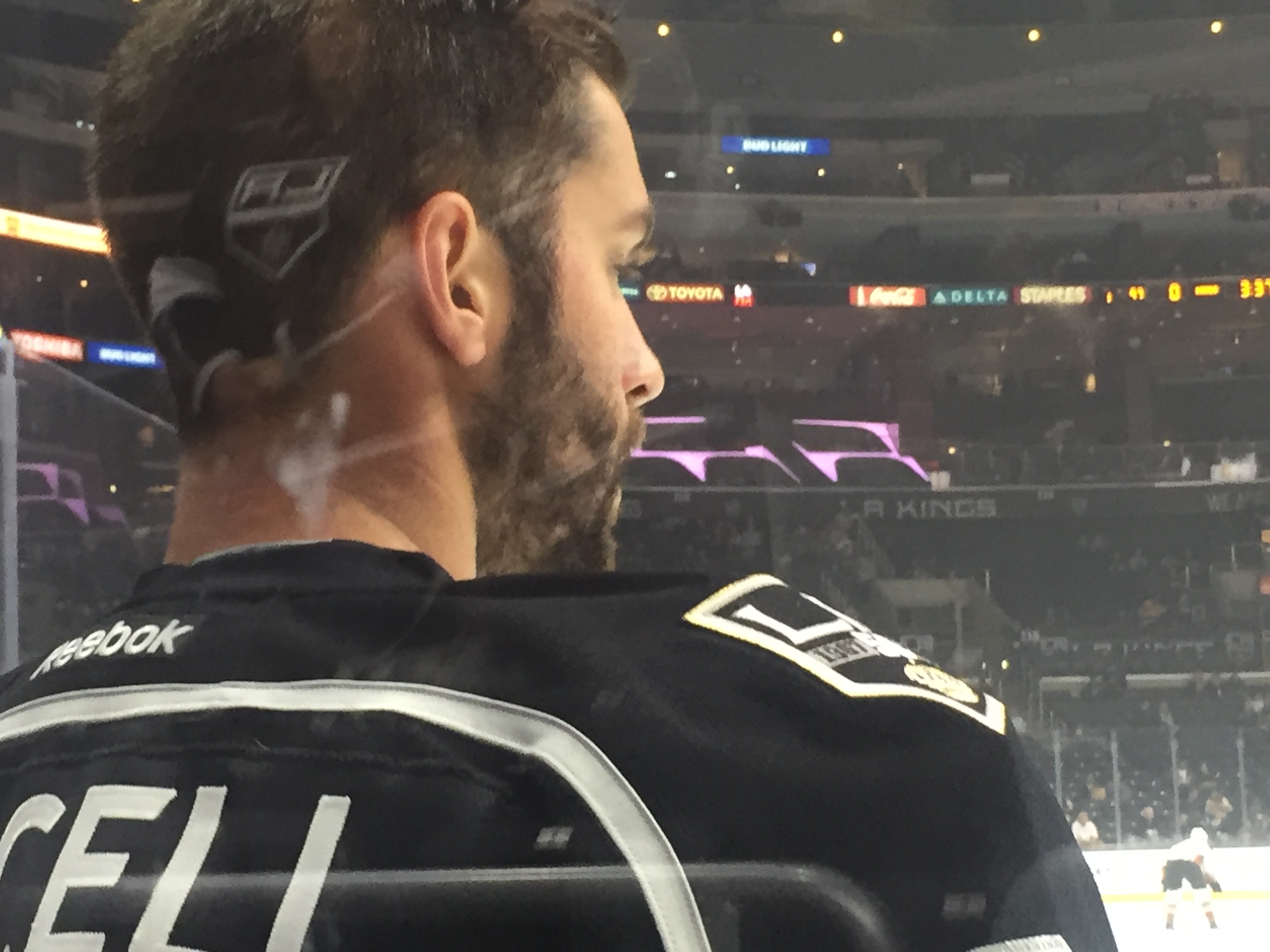