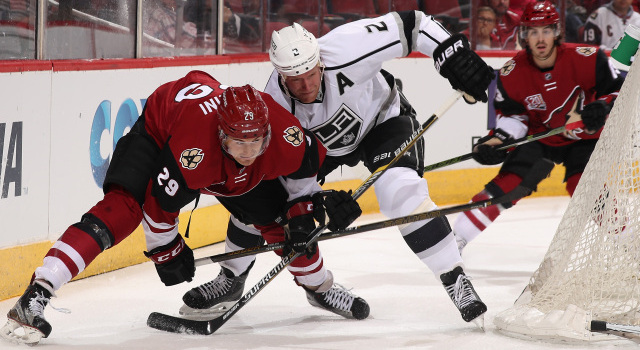 Davis Payne, on what he looks for in a first preseason game, and whether he saw it:
Well, you’re looking for lots of things. You’re looking for guys to step into roles and claim a spot, claim a responsibility on the team, and we saw some of that, and we saw some things that as a group we know we’re trying to claim our spot as a team as well, and you can’t win on the road and you can’t win too many times when you’re giving up five. We’ve got some things to clean up.

Payne, on whether he liked the team’s battle and compete levels:
Yeah, I thought we competed. There are areas that can get better. You know, it’s early. We’re trying to get back into it, and I think this is a good starting point. The problem is we gave up some stuff easy.

Payne, on the rush chances against in the first preseason game:
I think those are things that guys are trying to make some things happen and guys are trying to force some things. They can get you in trouble more often than it gets you ahead of the game. We liked the work, we liked the compete, we’ve just got to make sure it’s directed the right way.

Dwight King, on how he assesses the first preseason games:
We did some good things. Obviously not everybody’s familiar with the system. A couple guys played their first games, so we got to get the rust off of everybody. Obviously [we have to] clean up the odd-man rushes they had, but overall I think everybody came with a good effort, and that’s what you want out of game one.

King, on the team’s compete level:
It was pretty good. Obviously everybody’s excited – first game, both teams. Some good chances on both sides. Like I said, obviously some sloppy play, too. As far as the compete goes, I think everybody was skating pretty well.

King, on where the breakdowns occurred on the rush chances:
I think maybe just converting from summer hockey to real hockey. Trying to do a little bit too much, and maybe gambling a little more than you should. When you do that, obviously if it goes the other way, then you’re chasing.

Matt Greene, on his first game back after an extended absence:
I felt allright. Still a lot of things you’ve got to get used to. You can practice all you want, but games are different. Hopefully the intensity ramps up here as we go forward and you get a better feel for the game.

Greene, on the challenges of playing a first preseason game, and establishing reads:
Just reads, you know. Just plays. Turnovers. You can practice drills as much as you want and kind of kind of getting your gaps from there, but I think once you get into a game there are turnovers, there are guys who fall down, there are missed assignments, stuff like that, that you’ve got to react to all that stuff. That’s what makes it interesting out there. That’s why they’ve got these exhibition games, so it’s going to take a little while to get used to.

Derek Forbort, on his assist to Teddy Purcell:
Dowder just made a great play to me in the middle there, and Teddy did a good job of getting open, and I was just able to hit his stick.

Forbort, on the challenges of playing the first preseason game:
As far as challenges go, just staying disciplined, staying within our game. I think at times it got a little away from us, and we got a little sloppy out there, but we’ve just got to work those things out and keep moving forward.

Forbort, on developing a rhythm by playing in all situations:
Yeah, I felt good. I thought as a team we had some moments where we needed to get better, but I felt allright.