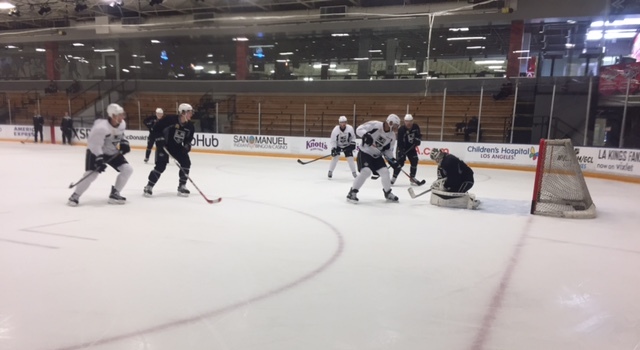 Good afternoon from El Segundo, where the Kings’ split-squad groups went through their separate morning skates and are now taking part in team meetings and workouts. I’ll join the group that will travel to Arizona today and will host a live game blog; tonight’s home game against the Coyotes will be broadcast by Nick Nickson and Daryl Evans on KABC 790 AM, while the game in Glendale will be broadcast by Bob Heethuis and Nick Boynton on Arizona Sports 98.7 FM. (I’ll post a link to the Arizona broadcast on the game blog.)

Notes: Projected lineups are always subject to change; those projected as extras took the final loop at the outset of line rushes. … I’ll have a story on Paul Bissonnette later, but the former Coyote joked about having a ceremony tonight to welcome him back to Glendale, Arizona, where he spent 187 of his 202 NHL games. He likened it to a 1,000-game ceremony, where he’d be presented with a silver stick. “They’re doing a silver bench,” he joked. … I asked Matt Greene about the competition on defense, with a collection of younger players and veteran players vying for a limited number of roles. “There’s always competition,” Greene said. “There’s always guys that are looking to take your job or younger guys coming up. For us to break in, we had to take somebody’s job, and it’s going to be the same way when we’re on the way out, and it’s up to us to make sure that we make sure that we do the best job we can to prove that you’re still here and do whatever you can to help this team win a championship.” … Mike Smith will start the game in Arizona but will be replaced by Louis Domingue midway through, according to Sarah McLellan of the Arizona Republic. Via McLellan, Justin Peters is expected to start the game at Staples Center and will be replaced by Marek Langhamer midway through. For more on the Coyotes, visit AZCentral.com.

Darryl Sutter, on which coaches travel, and which coaches stay for today’s split-squads:
Three go, three stay. It’s not a big deal. Just try and split it up every year. [Reporter: We usually see you on that road trip out Arizona. Not this year? You’re staying at home?] Well, usually we don’t go to do the world tour for whatever we’re doing up in B.C. this year. That’s a five-day trip. Usually we’d go in last night for this game today, so it’s better to stay here, quite honest. You get a couple practices in and send them guys up and we’re home by midnight.

Sutter, on what he saw from Sunday’s Kings vs Kings game:
I thought it was fun. I think the five-on-five guys, most guys haven’t played any games at all, so it was good for them to get a little bit in. It’s a little early to play games, but it was good, and then I think the four-on-four and the three-on-three was refreshing and fun for the players.

Sutter, on the coaches’ approach towards six games (over four dates) this week:
Running out of time. That’s what the bottom line is. Hey, we only have so many games. It’s marching on, so they should be thankful if they’re in, and they should be really putting their foot on the pedal to show what they’ve got. I mean, we’re going to really start getting down into who we see where by Wednesday. 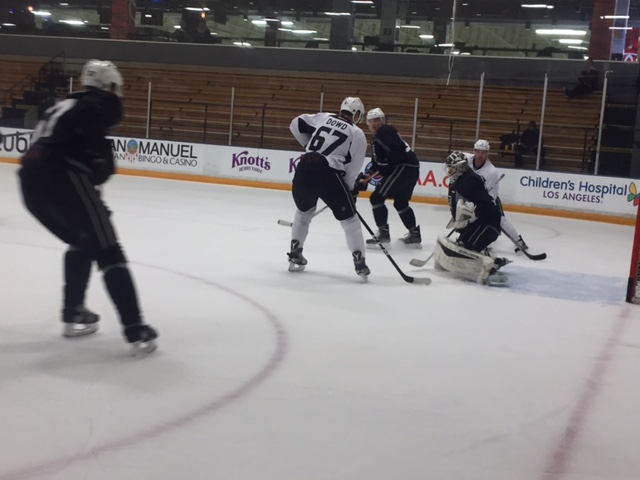