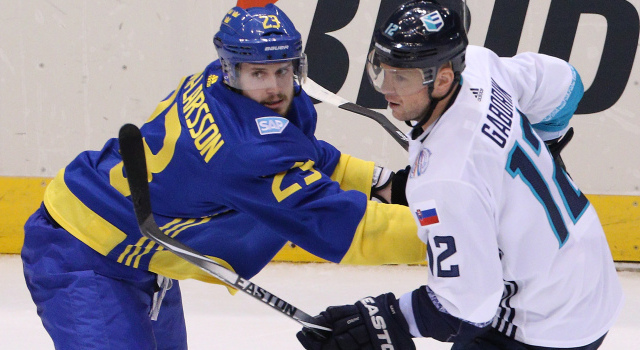 The type of news that NHL teams and fanbases had been dreading during the World Cup of Hockey has affected the Kings, as forward Marian Gaborik has suffered an apparent foot injury, according to reports, and is expected to miss the remainder of the tournament for Team Europe, which opens the best-of-three final against Canada on Tuesday.

Europe’s M. Gaborik will be lost for remainder of #WorldCupOfHockey final with foot injury. Start of season for @LAKings unlikely as well

I had checked in earlier with hockey operations to gauge the severity of the injury, but because news had broken so recently, it appeared as though they were still gathering information as well. The first reports began to surface midway through Los Angeles’ morning skate in advance of their split-squad games against the Arizona Coyotes.

Marian Gaborik just left the ACC on crutches and his right foot was in a cast.#WCOH2016

Via Renaud Lavoie, Gaborik suffered the injury during the second period of Europe’s overtime win against Sweden but was able to finish the game. Europe coach Ralph Krueger confirmed the injury, as reported by Helene Elliott of the LA Times, who also noted that Europe GM Miroslav Satan acknowledged that the injury occurred when the veteran forward blocked a shot.

Gaborik, who scored in the win over Sweden, totaled two goals, a plus-two rating and 13 shots on goal in four World Cup games. He missed the final 28 regular season games and Game 1 of the playoff series to San Jose due to a knee sprain suffered on February 12 at Madison Square Garden. The 34-year-old winger was under strong consideration to slot into an opening night line alongside Anze Kopitar and Dustin Brown.