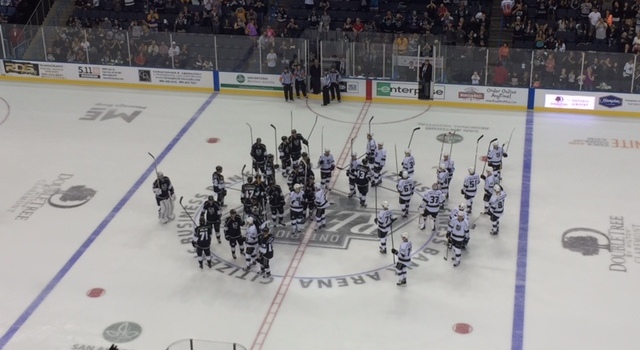 In an exhibition format that consisted of five-on-five, four-on-four and three-on-three play before a shootout, Team White edged Team Black 3-2 in front of a near-capacity crowd at Citizens Business Bank Arena in Ontario, Calif. Nick Shore and Michael Mersch paced White to a 2-0 lead before goals by Tanner Pearson and Jonny Brodzinski sent the game to a obligatory shootout tied at two. Devin Setoguchi – who set up Shore’s goal with a slick cross-slot pass – and Adrian Kempe scored for White, while Andy Andreoff scored Black’s lone shootout goal. Defensive prospect Zac Leslie became tangled up along the boards opposite from his team’s bench in the second period and had to be assisted back to the tunnel. He tried to skate off his injury a short time later by testing it during a timeout but was unable to return.

Several notes, as compiled by Reign Insider Lindsay Czarnecki:
–Adrian Kempe continues to play at the center position early in camp and at times was able to showcase his speed in this scrimmage, carrying the puck up ice and into the zone with speed. He also played some 4-on-4 and power play time with Tyler Toffoli and had a rare shot block for a game of this nature.
–The rookie camp line of Joel Lowry-Mike Amadio-Jonny Brodzinski has stayed together through main camp and is developing early signs of chemistry, but Stothers has mixed reviews so far. Lowry and Brodzinski will be second-year pros in Ontario while Amadio will be in his first pro season after joining the Reign in the 2015-16 playoffs.
–Goalie Jack Campbell went 1-1 in the shootout for Black. Campbell stopped Tyler Toffoli’s attempt but was fooled on a back-and-forth move by Kempe who roofed the puck over his right shoulder.
–Defenseman Zac Leslie was injured during the 4-on-4 portion after being tangled up along the boards. He came back out to test the injury moments later but went back into the tunnel and did not return. Reign head coach Mike Stothers said afterwards that there was no update and indicated he would likely need X-rays.

On whether there was any message to avoid punishing hits, given Clarke MacArthur’s injury in Ottawa’s intra-squad game today:
I mean, no, we want our guys to play hard, and I think they did today, but we didn’t want anything to escalate. We did stress that – play, play hard. Play the way you would in a game outside of we certainly didn’t want to see any gloves hitting the ice. And, unfortunately, Leslie got hurt. Things happen in the course of a game. I mean, you can get hurt in practice. You can get hurt in the weight room. That’s just the nature of it, and it’s very unfortunate.

On any update on Zac Leslie, who left the game in the second period:
You know what, I don’t know. I know he came back out and he tried to test it, but until we get some pictures on it probably, and I’ll leave it up to the medical guys to decide, but I don’t know.

On the importance of the upcoming season for Adrian Kempe:
You know what? You can ask me about Kempe. I’d love to talk about Kempe. He’s an exciting player to watch. This is a huge growth year for him. If you look at our club and where he’s come from, last year was his first full season … he’s got some good experience, and this is kind of a year for him to make a statement, not only in our league, but to everybody up above. His talent level, his skating ability, he should be an NHL-caliber guy, and if he plays the way we think he can, he might be there sooner than later. [Reporter: Is that experience for him at this point?] It’s a little bit of experience, but it’s the same thing we talked about at length last year. It’s consistency. It’s got to be there every night. It can’t just be a sporadic thing. I think that comes with the maturity of having a couple years under your belt, knowing what to expect from the league, how hard it is. There shouldn’t be any interruptions to him this year. He’s not going to World Junior or anything like that. It’d be nie to see him get off to a good start, but he’s the type of guy that can be a difference-maker in a game.

On a heavy week of exhibition games ahead:
Well, it’s funny. Coaches look at it as it’s too many games, and they want to practice more, and players probably look at it as they’d probably rather play more. The games are the fun part, but again, as we just talked about, you’ve got six games, and you don’t want guys getting hurt, you want them playing hard, and there are guys obviously competing for spots on the Kings, there are guys that are competing for a bigger role, so you know they’re going to go hard, and you expect that out of hockey players. That’s just what we do. But, I mean, that’s a lot of games. So I guess from an evaluation process or a point of view, it’s great because we’ll get to see everybody in a lot of different scenarios, and these guys that are close to making it, this is their time to step up and seize that job if it’s there.

On whether he’s liked the early play of the Lowry-Amadio-Brodzinski line:
It depends on how you ask, I don’t know how to answer that one because I’ve liked some of the things and then I haven’t. So, I think the fact that they’re a little bit familiar with each other is great, I’m not opposed, I think it would be a great line, but I don’t think they’ve been terrific. They’ve been good. Good’s OK. I like terrific.