Familiarity, amidst some changes, in Purcell’s return 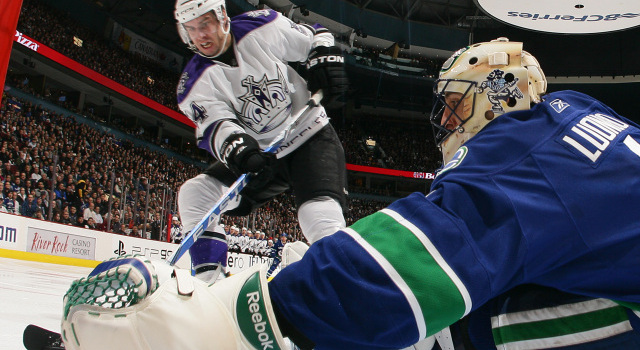 It’s a homecoming of sorts – well, as much as a homecoming can exist for someone playing some 3,500 miles away from his upbringing along the eastern shores of Newfoundland.

But Teddy Purcell has been a Los Angeles King. Like goaltender Jeff Zatkoff, he was signed and incubated by the organization before departing for points elsewhere. He was a roommate with Alec Martinez when the two were teammates for the team’s affiliate in Manchester. Ditto with Trevor Lewis. There is some familiarity in returning to a place that feels familiar yet has evolved quite a bit after he was traded along with a third round draft pick to Tampa Bay for Jeff Halpern in March, 2010.

“Seven or eight guys I’ve kept in touch with, and it was a good icebreaker. I came in, I didn’t have to meet new guys or find who I was going to click with,” Purcell said. “They helped me with stuff – I’m driving Stolly’s car now, waiting for mine to come in. They helped me, trying to tell me where to live, where they all lived. So it just made those little things that you don’t think that are important a lot more easy to take care of stuff.”

The Kings, in return hope Purcell offset some of the production lost when Milan Lucic left for the Edmonton Oilers. But that’s not necessarily a fair comparison. Purcell obviously won’t be counted on to serve in the same role as Lucic and will see the ice in a different variety of situations.

“The first thing for me is I’ve got to gain the coaches’ trust. I’ve got to show ‘em that I’m responsible away from the puck,” said Purcell, who has averaged .59 points per game over the last six seasons, having missed only nine games over that span.

“It kind of sounds selfish, but you want to gain their trust, and if you do well, then they’re going to slot you into good positions to succeed. We talked about some stuff in the summer, but it changes almost daily at training camp, and I think when I was younger, maybe you kind of analyze it a little too much and beat yourself to death and not sleep over it, but as an older guy you kind of go out and take care of your own business and that stuff will fall into place.”

Purcell has been skating to the right of Kyle Clifford and Nic Dowd during early camp alignment, which means very little. Los Angeles is yet to receive any of its five players back from the World Cup, so pairings and rushes are largely unimportant until the team gathers in Las Vegas for its final two tune-ups of the preseason, against Dallas on October 7 and Colorado on October 8. By then, there should be a clearer picture of where and with whom he may start the season.

“I mean, anyone would be lying if they said you wouldn’t like to play with a guy like Carter or Kopitar, but if I play well and take care of my own stuff, that will work out and we’ll go from there,” he said.

It was a reunion that he would have welcomed but had trouble envisioning in his 2015-16 campaign, a contract year that began with Edmonton before a near-deadline deal with the playoff-bound Florida Panthers.

He ultimately recorded 14 goals and 43 points and continued to post strong possession rates relative to his teammates, a consistency in his now matured NHL career. But given that he had an option to become a free agent, and the Kings have been hit by a salary cap crunch, he didn’t necessarily foresee a return.

“I mean, I always kind of wished, but no, they were always a team that was close to the cap and they always had their set guys,” he said. “I think they were going back and forth, they didn’t know if Lucic was going to come back, and it was kind of last minute, to be honest. I had some other offers and some longer terms on the table, but I thought it was a really good opportunity to come into a team that always has a chance to win. They’re well coached, I’m familiar with the guys, they’re a fun group, they work hard, so I just thought it would be a good fit for this year, and kind of see where it goes.”

One of the places the team would like it to go is deep into the postseason, where Purcell has raised his production to the tune of 20 points in 28 career games, 17 of which came in an 18-game run with the Lightning in 2011. But, off the ice, the organization also likes to go to community events, to charity events, to events that allow the natural largesse and selflessness of hockey players to be revealed.

While a King, Purcell, like Alec Martinez and Tyler Toffoli and a number of others on the current roster, had the reputation of someone who was always willing to assist in the team’s community outreach, a trait that he inherited from both his family and those he shared a dressing room with.

“My parents always kind of had that talk with me,” he said. “When you’re younger you don’t really realize it, but we’re in a unique position where we can offer stuff to give back, and Ryane Clowe, the guy in San Jose who was one of my best buddies – he still is – but he had a golf tournament back home, and every year [we took part]. We brought big guys there. They were excited to see us, but Joe Thornton was there, and Dany Heatley came, Steven Stamkos, Vinny Lecavalier was there one year, so just to be able to that to a small province, and to give back to different charities – even when we were here, we built playgrounds, or you’d go to the hospital downtown. It’s fun. We do have our off-days, and you are tired, but especially when hockey’s not going well, or say you’re in a slump, you think the world’s coming down on you, and then you do these things, and you’re like, ‘wait a second.’ This kind of puts things in perspective, and maybe it’s not so bad. You see little sick kids who have a huge smile on their face every day. It just really makes your day and really puts things in perspective, and I think it’s something that’s important that I take some pride in.”

It all adds up to a player excited for the opportunity to return to a team where he still has to chisel out a role and play to his strengths for a playing, coaching and support staff that has evolved since his departure, both by personnel and through the team’s success earlier this decade.

“I’m excited to be back,” Purcell said. “A lot of familiar faces, obviously a lot has changed with the success they’ve had and the renovations to the room and stuff and the coaching staff, so I’m just trying to get my bearings. It’s good to get a couple of days under your belt and see how the practices work, what the coaches expect out of players. It’s demanding, it’s fair. The practices have been high-paced, a lot of attention to detail. So I’m just trying to absorb everything I can the first couple of days and just kind of get my body ready for the exhibition games.”

Though the organization has evolved plenty since he left, the familiarity surrounding him should soften the transition that many players endure when changing teams.

“It was heading into that direction of being a first class organization,” Purcell said of his earlier Kings tenure. “It was a great organization then, but now it’s really put itself on a pedestal. Just everything to do with how they look after the guys – like I said, the weight room has a retractable roof. It’s almost funny when you hear about it. Especially when you’re coming from Edmonton and your car doesn’t start when you leave the rink to here, you have a retractable roof in your weight room. Stuff like that – obviously walking around, you see the Stanley Cups, and you’d just do anything to be a part of another one here. The coaching staff is different, but I’m familiar with Dean, and I’ve played with Blakey, and he’s here now. The core guys that are on this team, I came up with those guys, most of them. So, a lot of familiarity, and I thought that was a big thing of when I made the decision to come back here.” 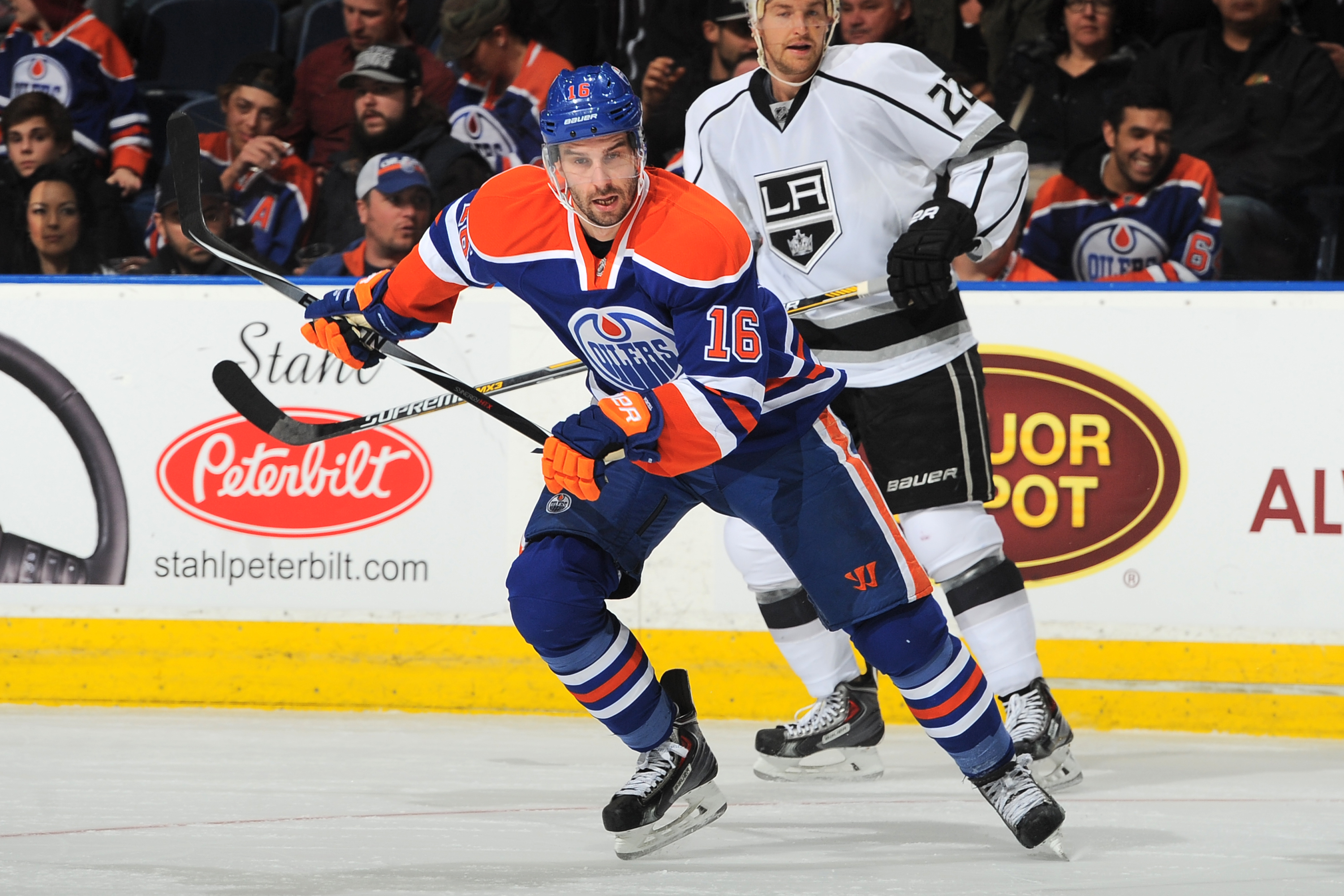