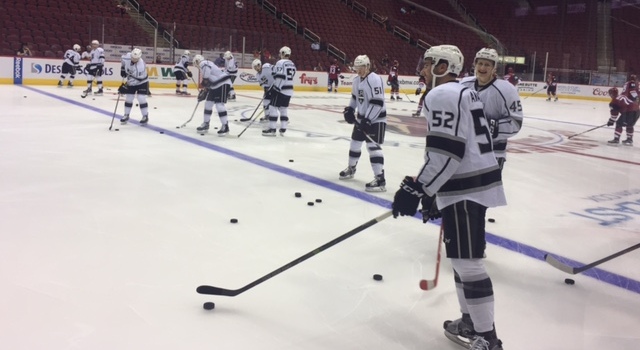 On whether he looks at today’s game as a loss, or whether he was happy with allowing one even strength goal over two games:
I prefer to look at it as I thought we played five really good periods out pf six. I thought today’s second period we weren’t very good, and it cost us the hockey game, you know? That’s the bottom line. But things like that are going to happen. It’s a process that they’ve got to learn, that pro hockey, the American Hockey League, the NHL, you’ve got to keep working. You’ve got to keep competing and you’ve got to keep playing. We didn’t move our feet at all in the second period. A lot of standing around. So that one stings a little bit, but as I said, five out of six periods, I thought we were good. So, I’ll take that.

On whether he saw added leadership in these games from players who have already played for him:
Last night, Brodz was in the lineup and Herr was in the lineup. That makes a big difference as far as having some experience and some veteran guys. They’ve been around long enough to know. Both Brodz and Lowry, for two examples, experienced a tough start to the season last year. Lowry was injured and it took him a while to get in the lineup, and then Brodzinski went a long stretch without even scoring his first goal, so they kind of know how hard it is to play in the American Hockey League. So I think having them around is great, and I thought they did a great job for us. It definitely helps these younger guys not knowing what to expect. Some of them, it’s their first camp, so you walk into an NHL building, it’s pretty intimidating. Yeah, it was good. They’ve been a good influence. They’ve been a good example for all our guys right from the first practice in rookie camp.

On whether there was a step forward in executing the team’s systems in the rookie games:
Yeah, I thought overall, as I said, five periods I thought we were good. I thought we did a lot of good things. I thought we played the way we wanted to play. We did some things when we didn’t have the puck to get it back, and we got away from it for one period, and again, that’s the consistency you’re looking for, making sure you’re playing a full 60 minutes. If you only play 40, it’s not always going to work in your favor.

On whether he has a sense of the severity of Kale Clague’s second period injury:
I honestly don’t even know for sure. It’s a lower-body injury, and I honestly have not had a chance to speak with Muirsy yet. I don’t think it’s going to be bad. But it is going to be bad, because he’s a young guy and he’s going to miss a little bit of time, I would imagine. You never want to see a young kid get hurt. You don’t want to see anybody get hurt. And then that hurt us. Going down to five, I mean we just played yesterday at six [p.m.] and today you’re playing at two [p.m.] and you go down to five D, it puts a pretty good workload on everybody else. But I think he’ll be OK, shortly.