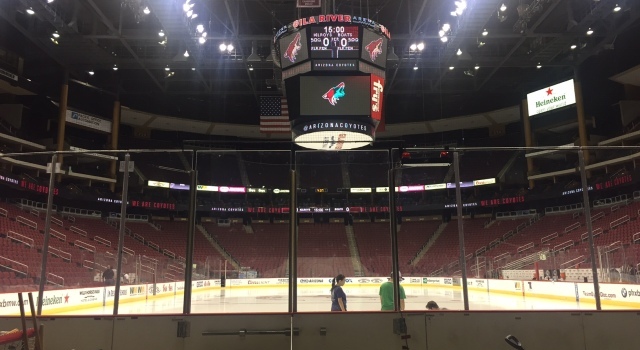 THIRD PERIOD:
20:00: Green Light: Now Begin. Flinn, Langhamer remain in goal.
17:55: PENALTY ARI. Tripping on Braid.
16:15: Lintuniemi power play wrister from straightaway at the blue line sneaks through traffic, catches the underside of the crossbar.
13:50: Training camp for the goal horn operator, too. Short-side wrister to Flinn’s right catches the side of the net, but the fans cheer and the horn sounds. Did not go in. Play continues.
12:50: Nice slide and right pad save by Flinn on Crouse’s tap-in attempt. Some Arizona pressure.
9:25: Good hit by Sharipzianov on Bushnell, who attempted to gain entry into the offensive zone. Separated body from puck, but still laid the lumber.
8:07: GOAL LAK. 3-1. Brodzinski, who has looked assertive all night, skates from behind the net to the right of Langhamer, goes top shelf far post. Had a teammate wide open in the low slot but elected to shoot. Poor defensive zone coverage by Coyotes.
6:00: Packing up and heading downstairs for media availability. End of live blog, for now.

SECOND PERIOD:
20:00: Play resumes. Jack Flinn now in net for LAK.
14:24: Jacob Friend with an unfriendly hit on Christian Fischer after activating deep into the offensive zone.
12:35: Dangerous centering feed deflects to Noted Rookie Game Kings Killer Brendan Perlini, but he had trouble getting a shot off. Puck cleared.
10:35: Good forechecking by Quentin Shore creates a turnover. (You can tell that there’s not a glut of action when I’m commending the forechecking in a rookie game live blog.)
10:05: Flinn makes a big stop on Bunting, who found a seam down the left wing. Kings received a fortunate early whistle as the puck remained in covered in the crease.
9:45: Arizona pressure.
8:36: GOAL ARI. 1-1. Dvorak gets some momentum behind the net, circles unimpeded into the slot, unleashes snapper that beats Flinn. [howling]
6:47: Nice glove save by Langhamer on Lintuniemi’s wrister on a three-on-two drop pass. Good transition by the Kings.
5:50: Brodzinski misses wide on two wristers from the slot. The second was deflected; both came after he did a good job of putting himself in position to shoot the puck. Showed some good strength on the puck.
4:24: GOAL LAK. 2-1. Herr angles himself well behind the net in preparation for a wraparound, spins, beats Langhamer inside the far post. Assist to Koules.
0:40: Braid’s shot from the right point deflected off the outside of the post, to Flinn’s left.
0:00: That’ll do’er.

FIRST PERIOD:
20:00: Underway in Arizona. Jonny Brodzinski is wearing the C.
18:10: Heads up play by Schmaltz, who stripped a puck free on an Arizona breakout, creating a 2-on-1 rush towards the Coyotes’ net. Pad save Langhamer on the wrister. Some pressure followed.
17:15: Grade-A-minus chance by Arizona. Lane Pederson’s wrister from the high slot kicked out by Willms.
16:35: Brodzinski nicks the outside of the post from a sharp angle after Lowry’s stuff attempt popped loose.
14:23: PENALTY LAK. Luff whistled for a high stick in the attacking zone.
12:29: Strome denied from the slot. No rebound.
12:23: Penalty over. No pressure early but some late, especially as Luff hustled back to join the play.
12:18: Nice Willms save from close range on MacInnis.
11:37: PENALTY ARI. Slashing on Bunting. Present participle on present participle. (This is the extent of my grammar knowledge.)
10:25: B-plus chance on Amadio’s feed to Sharipzianov, which was one-timed at the net and denied by Langhamer.
10:07: Pretty good save by Langhamer on Amadio from the left circle stops play.
9:40: Shorthanded breakaway attempt by Strome. Attempted to tuck it between Willms’ legs, but the Moose Jaw Warrior made the save. “…Who hails from, if I can read the card, Moose Jaw, Saskatchewan.” Good period thus far by Willms.
8:50: Clague falls while defending a rush, leading to an odd-man situation. Coyotes get a pass off, not a shot. Yet to see the truculence that often defines Kings-Coyotes rookie games.
7:55: PENALTY ARI. Goulet for hooking in the offensive zone.
6:38: McColgan sneaks into the offensive zone and fires a shot off from the high circles, but Langhamer makes the save. No rebound.
5:05: LAK GOAL. 1-0. Luff sneaks into the slot, receives a pass from Gutierrez, snipes high glove on Langhamer.
4:15: Kings generate tremendous pressure but can’t beat Langhamer to double the lead. Excellent saves from close range on Amadio, Lowry.
3:42: Mups lit for the first time this season. Missed you, hockey.
1:56: Terrific, aggressive play by Sharipzianov to jump into the play, disrupt an outlet pass, toe-drag around a defender, and unleash a hard wristshot. Save, Langhamer, no rebound. Created something out of what began as a routine Arizona breakout.
0:00: ~fin~ 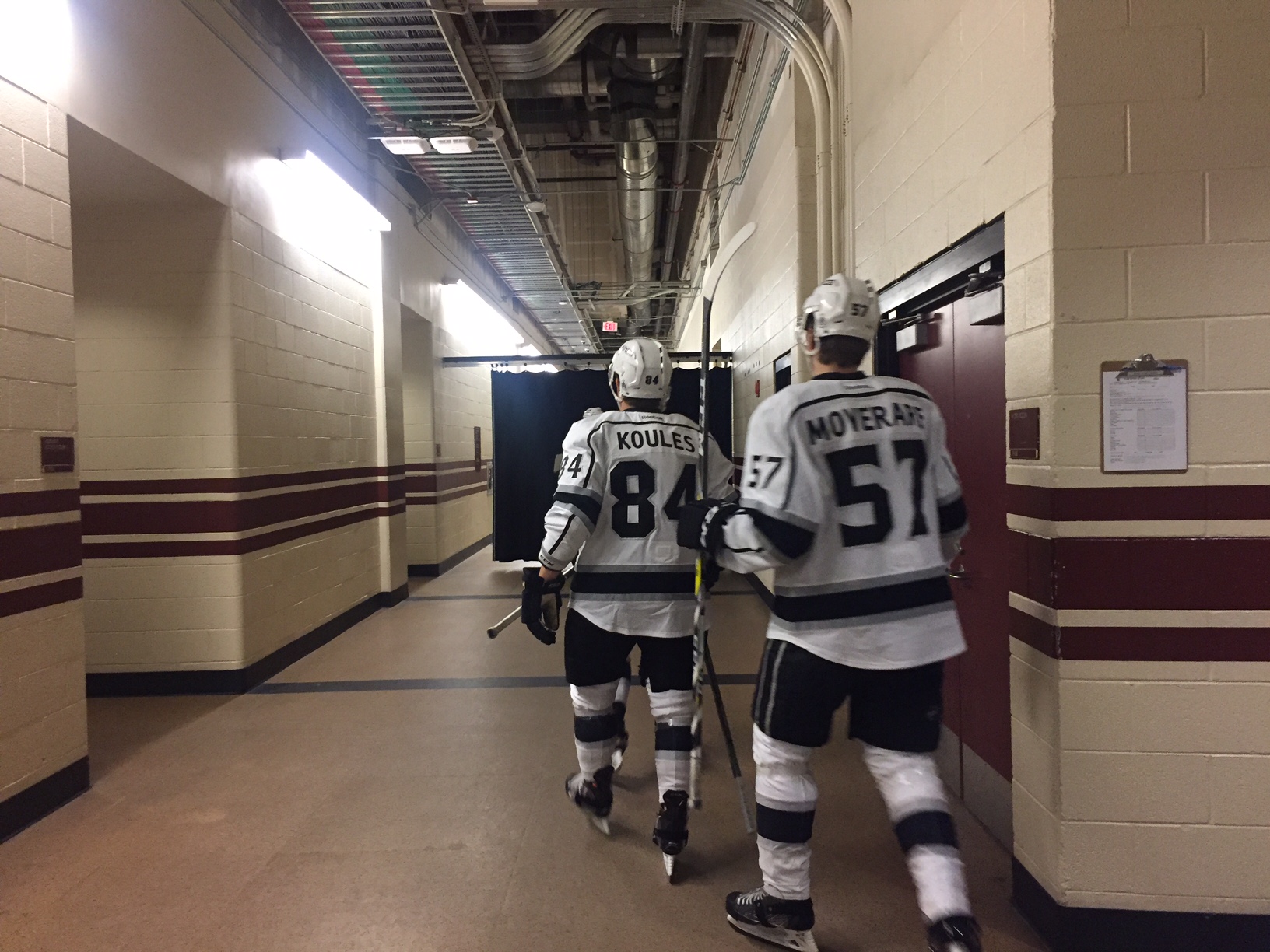 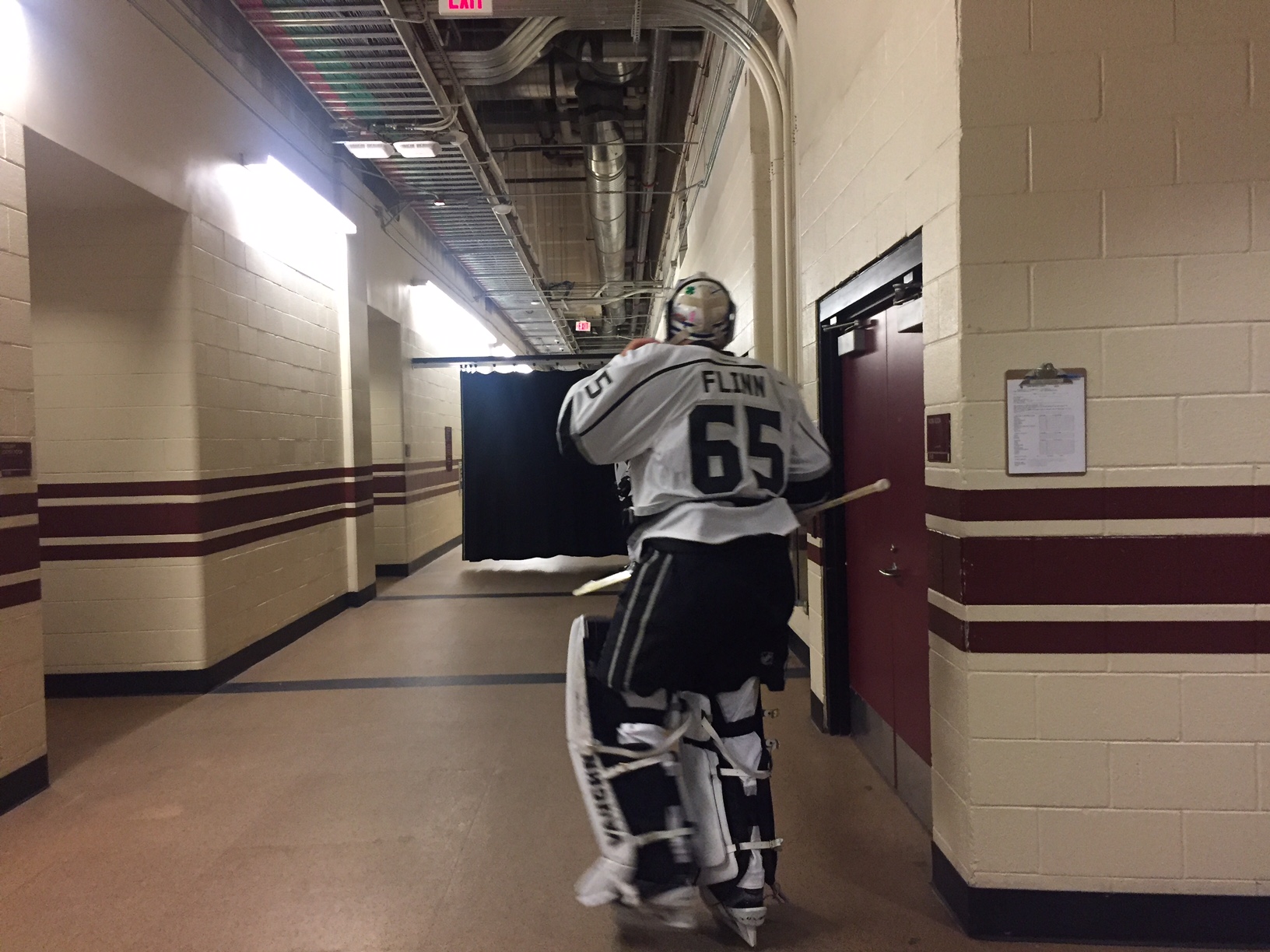 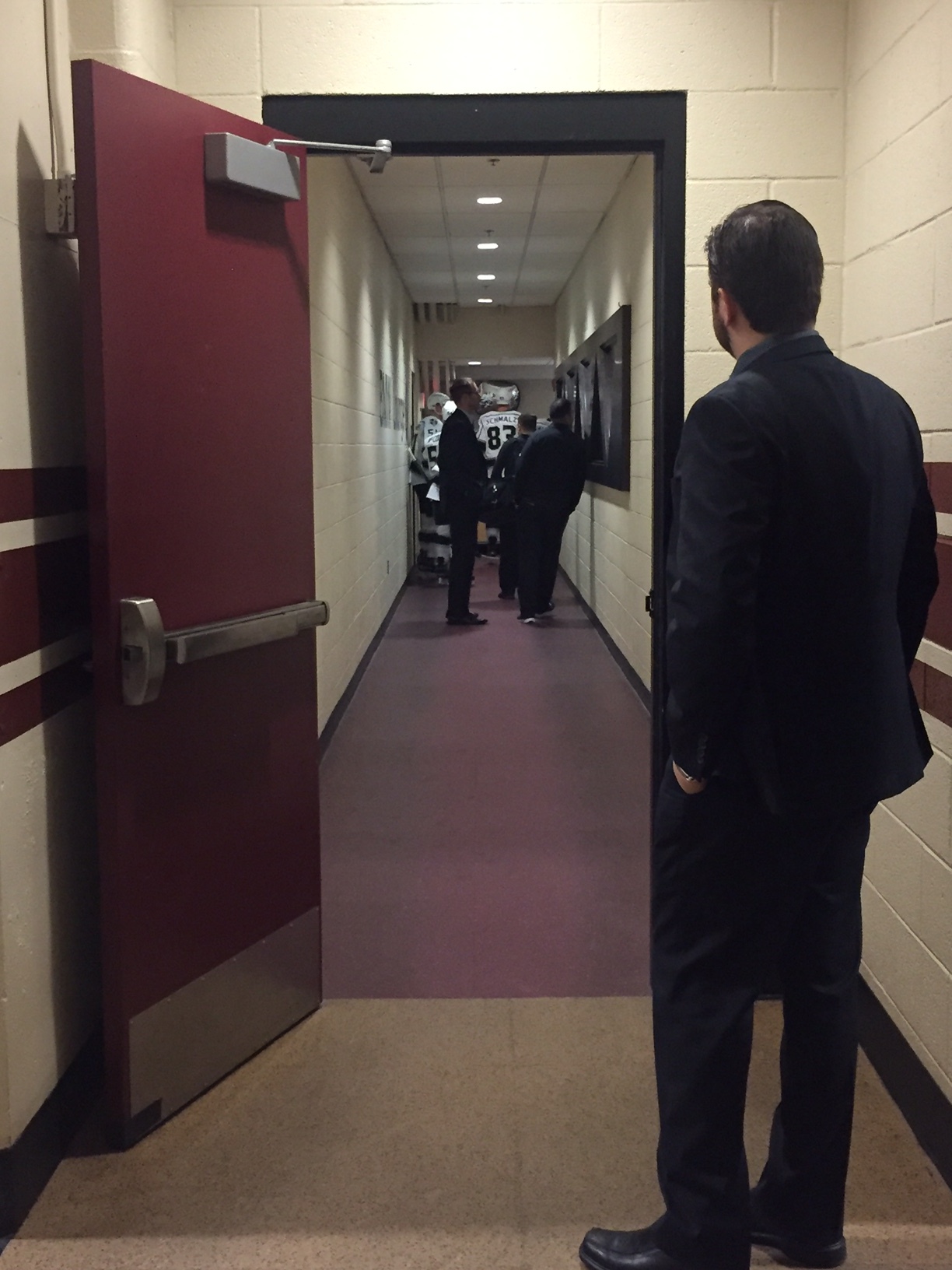 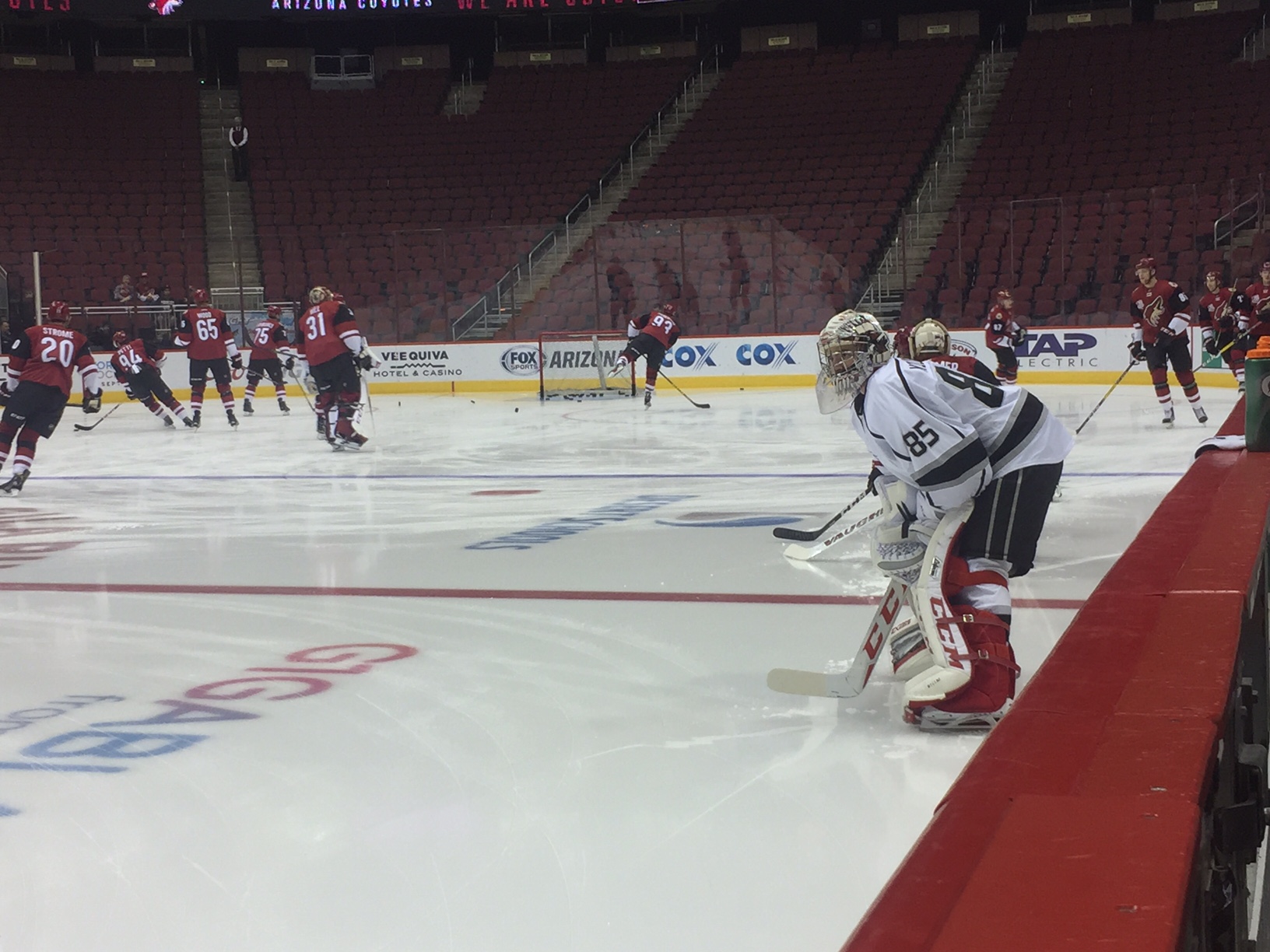 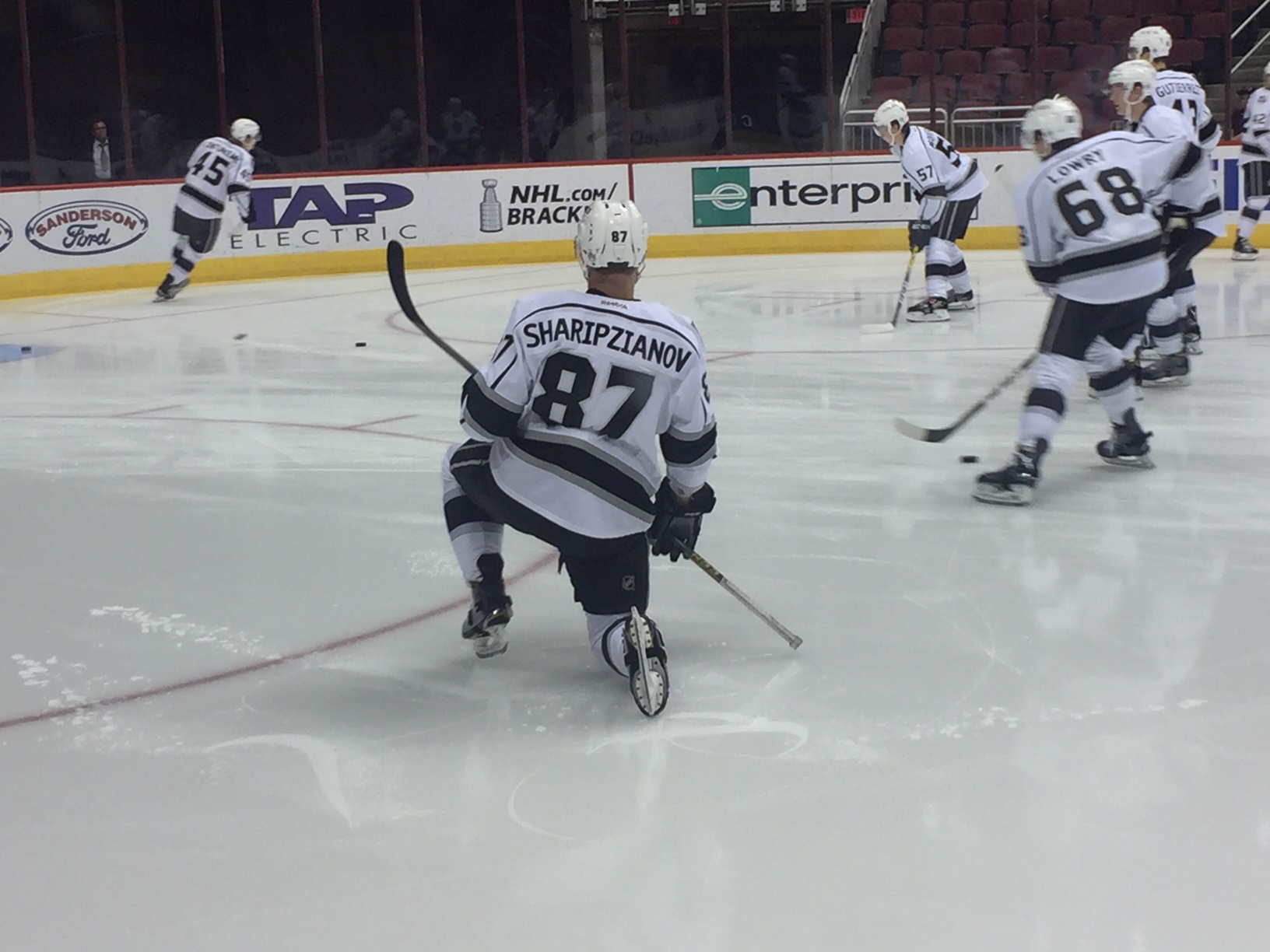 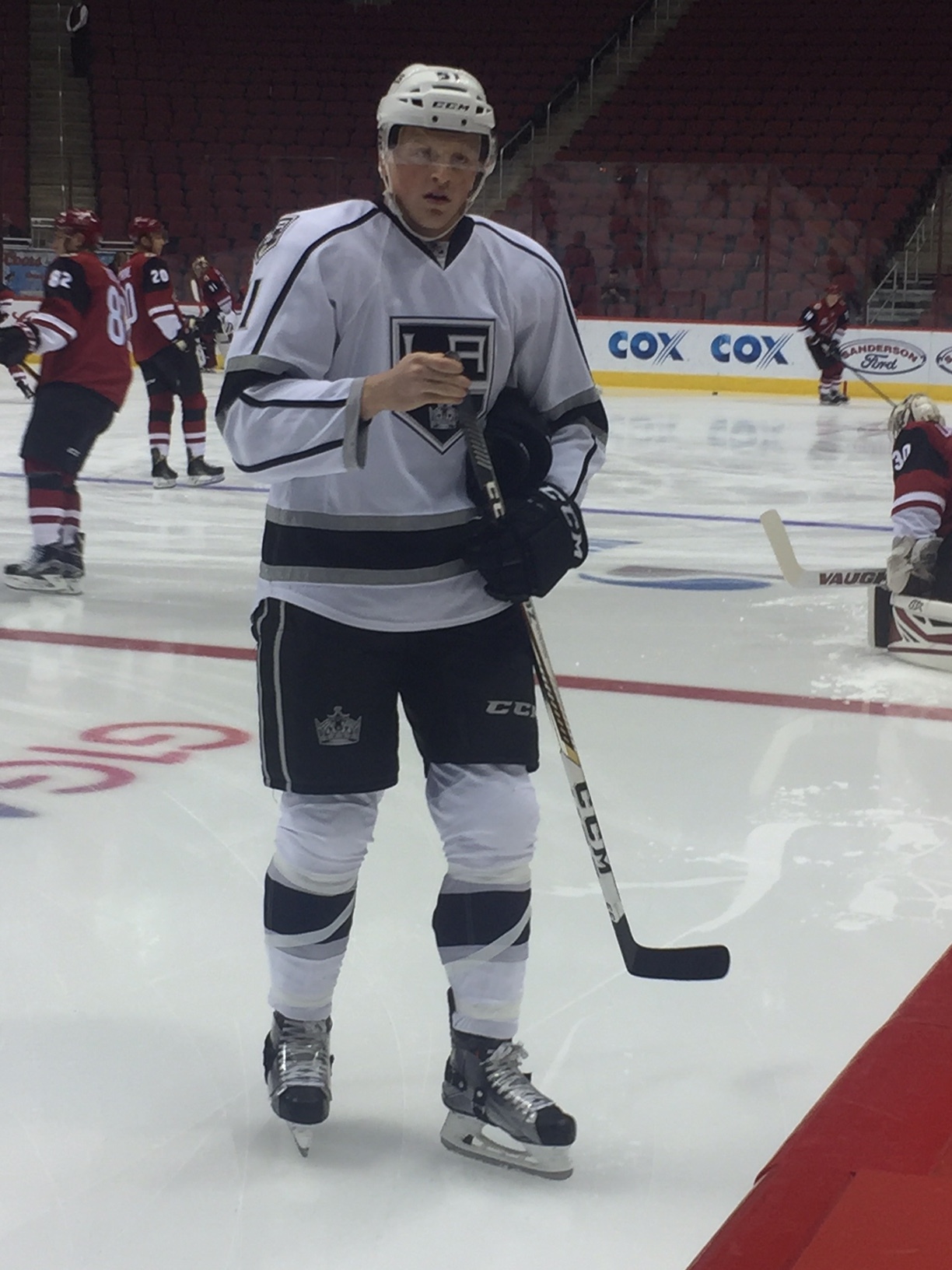 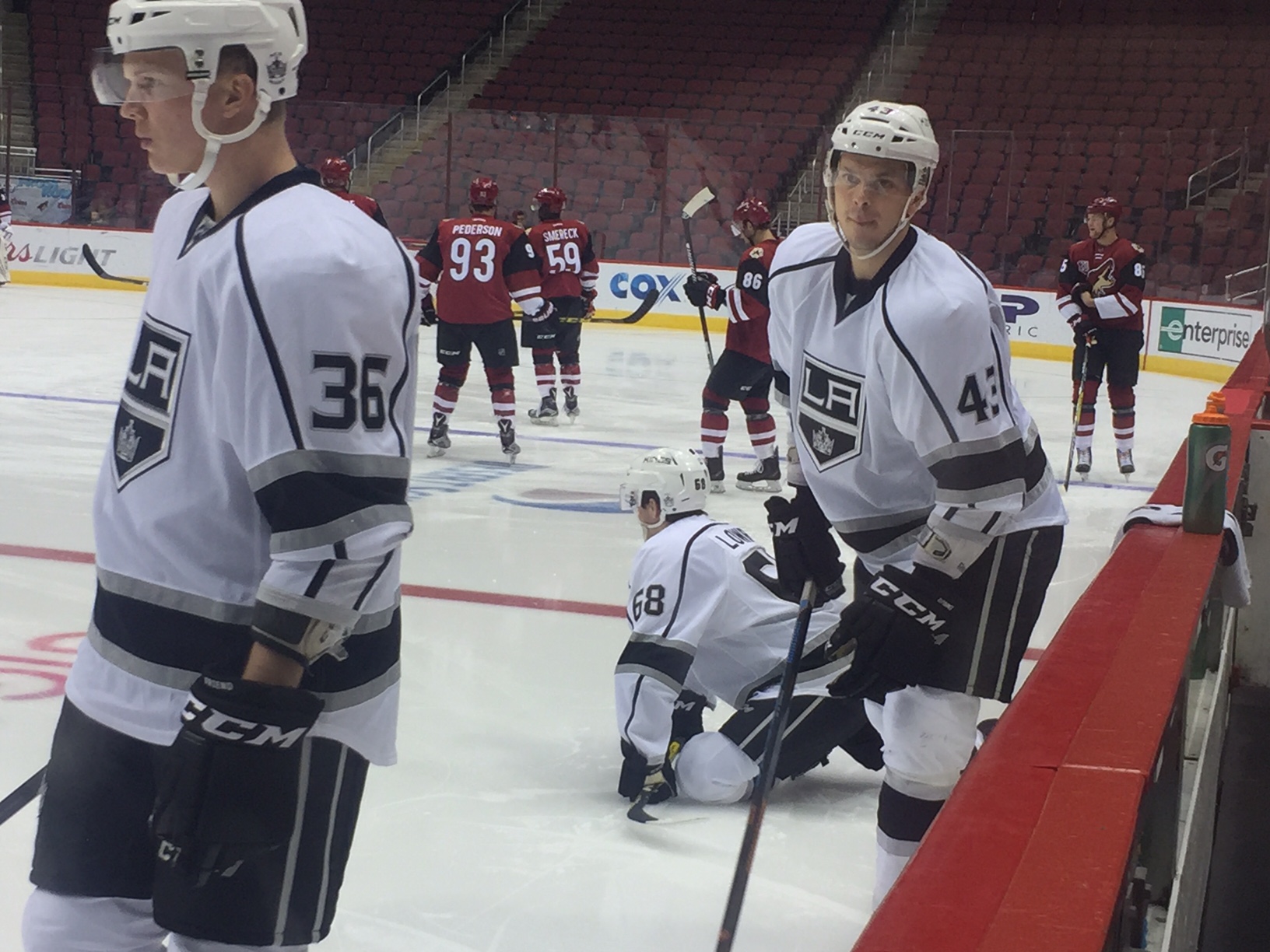 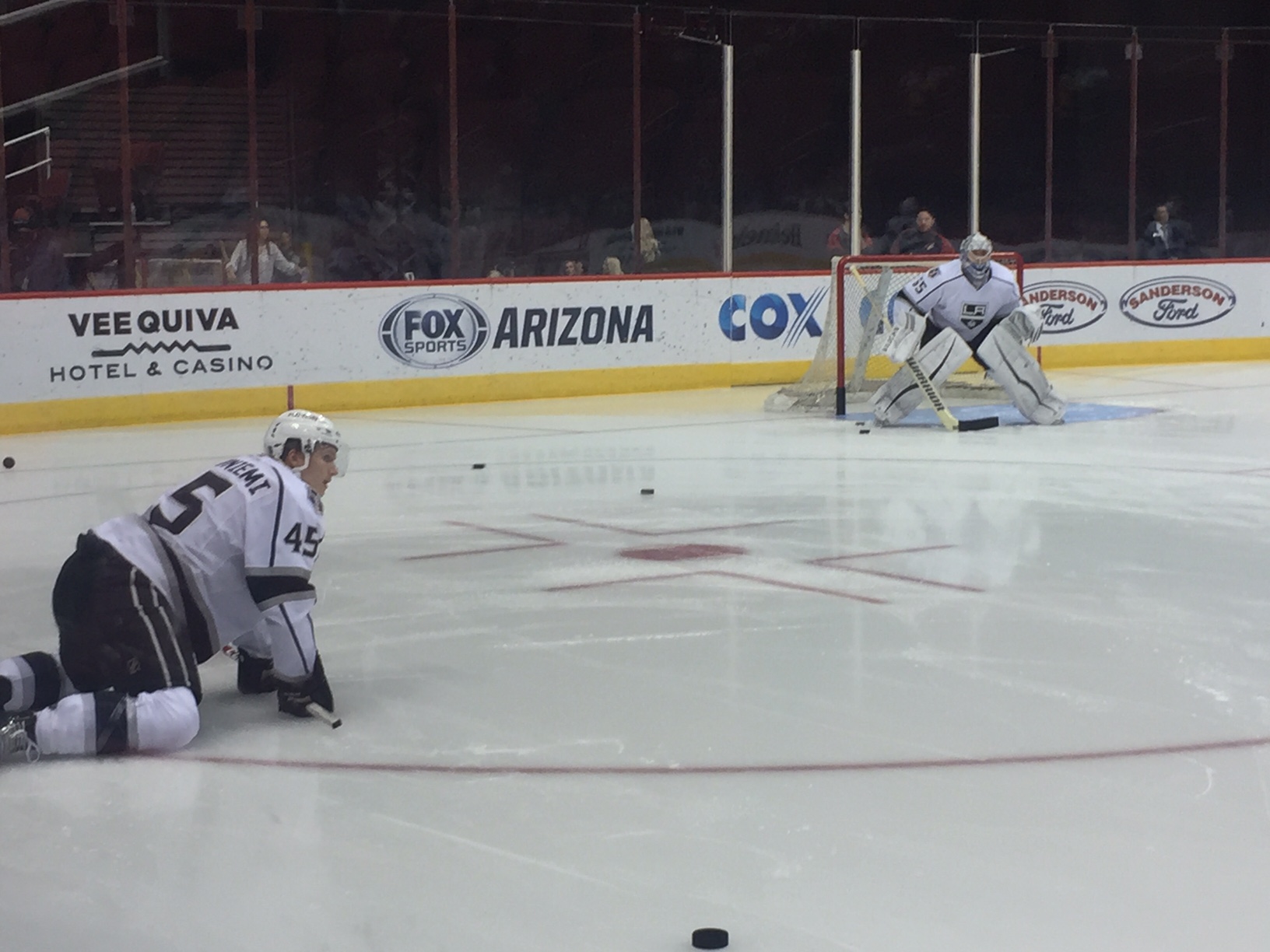 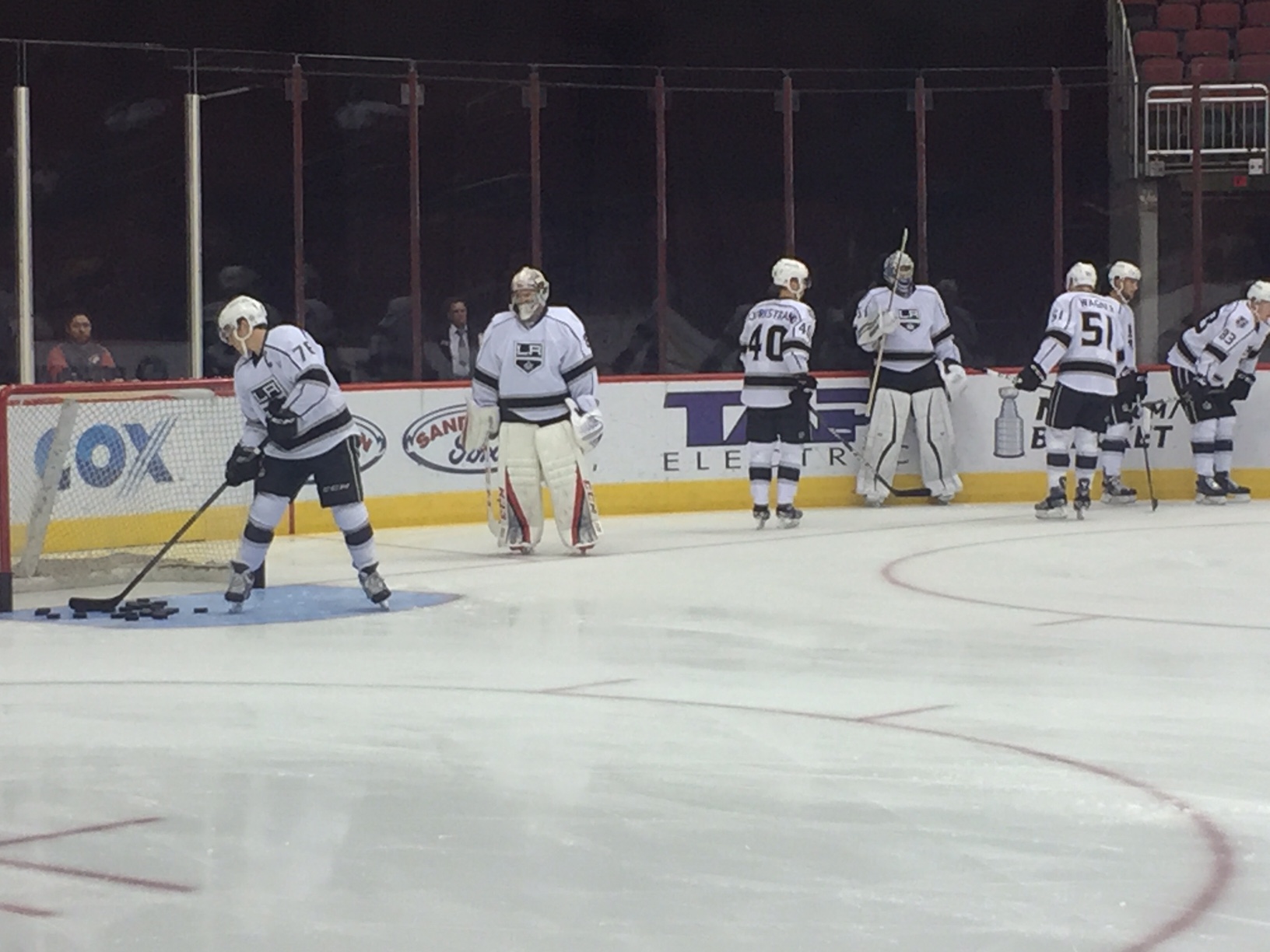 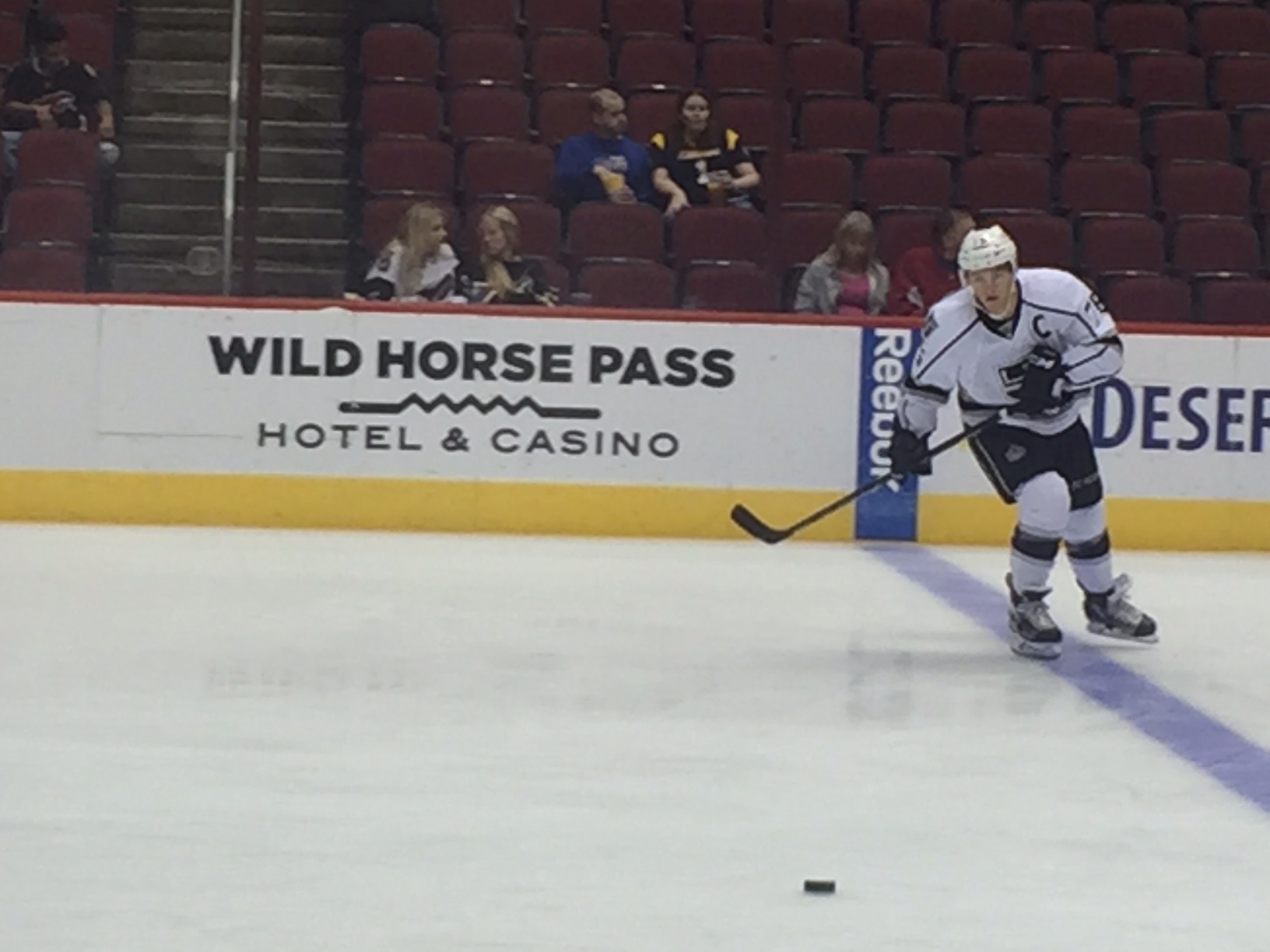