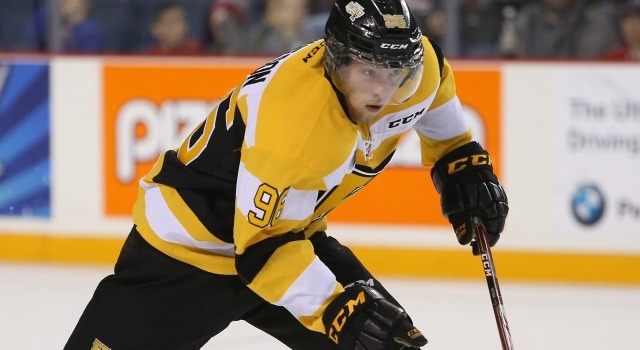 Several prospect notes from El Segundo on the eve of rookie camp:

-When posting the expected rookie camp roster earlier in the week, LAKI commenter @matthewlintao asked why Spencer Watson (7th round / 2014) wasn’t included. After some correspondence with hockey operations, the answer isn’t a great one: he underwent wrist surgery over the off-season, and his time frame for a return is looking like late December. Watson played through the injury during the OHL playoffs and was on the roster for development camp in July, but the decision was made for the crafty but diminutive prospect who skates well and possesses a sharp wristshot to undergo surgery, and while it shouldn’t hinder his development moving forward, it is likely to affect where he’ll play this season.

Watson had been penciled into a role with AHL-Ontario in 2016-17, but because he’s listed at 5-foot-10 and 170 pounds, and the biggest hurdle heading into the season is in building up appropriate size and strength to compete effectively in the AHL as a 20-year-old, it’s now looking like he’ll head back to the Ontario Hockey League as an overager when he returns from his injury. He just hasn’t been able to have the type of summer necessary to put himself in the best position to succeed as a first-year, mid-season entry in the AHL, so the OHL is likely to beckon come winter.

-Several notes on a pair of Russian prospects: Alexander Dergachyov (3rd round / 2015), who signed a two-year contract with SKA St. Petersburg in April, remains in Russia and won’t take part in rookie camp. The Kings remain in contact with Dergachyov – along with teammate Nikolai Prokhorkin, whose NHL rights were retained by Los Angeles – and I’m told that through their conversations, “everything’s been amicable.” There is some concern, though, on a stacked team like St. Petersburg, that Dergachyov hasn’t been receiving heavy minutes during an important juncture in his development. He’s appeared in five of SKA’s first eight games and is yet to register a point while earning an average of 10:26 of ice time per night. Don’t be alarmed by the statistics; Dergachyov, who totaled two goals in 33 games with SKA last season, is still a teenager for another 12 days, and there’s plenty of time and opportunity to grow. But instead of that opportunity taking place in Ontario or with a major junior team, as Los Angeles had hoped, it will take place in St. Petersburg. His current contract expires after the 2017-18 season.

Speaking of Prokhorkin (4th round / 2012), who turns 23 on Saturday, he’s opened his 2016-17 campaign in St. Petersburg with three assists and an average time on ice of 14:06 through his first eight games. Last season, with Salavat Yulaev Ufa, he totaled 19 goals and 36 points in 55 games. You may remember that he had been the piece reported to be heading to Edmonton in the Teddy Purcell trade that never materialized because of his unwillingness to commit at that time to North America. Despite that, the team is still keeping tabs on Prokhorkin, and I’m told that Kings representatives will travel to Europe to continue to communicate with and gauge the progress of both players. Jeff Veillette of Leafs Nation recently reported that other NHL teams have approached Los Angeles to inquire about Prokhorkin’s rights.

-Another topic that will be covered in the coming days when rookie camp begins: rookie camp leadership. This sounds vague and incalculable, but for players who will be expected to earn a role with AHL-Ontario this season – players such as Paul Ladue, Joel Lowry, Alex Lintuniemi, Jonny Brodzinski and Michael Amadio, amongst others – there will be a reminder that it would be a “huge thing for them to take on a leadership role” during camp and the two-game series against Arizona’s prospects next week at Gila River Arena. I’m told that Ladue (6th round / 2012), who will be playing his first professional hockey this season after spending three seasons with the University of North Dakota, had a great summer. He’ll be among the intriguing prospects to keep an eye on when camp opens tomorrow morning at 10:00 a.m.