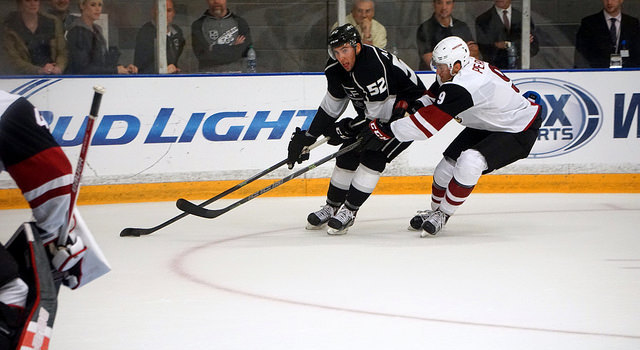 Hockey season draws near. The Kings announced that rookie camp opens this Friday, September 16, at Toyota Sports Center in El Segundo with a 10:00 a.m. practice. No schedule was released, but judging by the structure of past years’ camps, there are generally two sessions per day – one in the morning, and one in the afternoon.

Rookie camp culminates with a quick trip to the desert to face Arizona Coyotes rookies in a pair of games at Gila River Arena on September 20 (6:00 p.m.) and 21 (2:00 p.m.). Both games will be streamed at ArizonaCoyotes.com and should pit a group of Kings prospects against a consortium of Coyotes young’uns that could include first round picks Dylan Strome, Nick Merkley, Brendan Perlini, Jakob Chycrun and Lawson Crouse, and OHL First-Team All-Star Christian Dvorak, who led the O with 52 goals last season.

The Kings will feature a group that includes Mike Amadio, who also reached the 50-goal barrier in the OHL last season and debuted professionally with Ontario in the AHL playoffs, 2016 top pick Kale Clague, poised 1998-born defenseman Jacob Moverare, who took part in Sweden’s world juniors summer evaluation camp as a then-17-year-old, recent Los Angeles signee Patrick Bjorkstrand and AHL skaters in Jonny Brodzinski and Joel Lowry, amongst a group of 25 players.

Having reported on those expected to receive a tryout, and by subtracting the club’s NCAA-tied players and the German-based group from the team’s development camp roster, Los Angeles should feature a rookie camp roster that could include the following group:

Shore, Gutierrez, McColgan, Barre-Boulet, Luff, Kielly and Imoo are on tryouts, while Herr, Koules and Flinn will attend on AHL contracts. Gutierrez and Luff both drew recognition following their appearances at development camp. As always, rosters and schedules are subject to change.

The first on-ice sessions for the full team’s training camp are scheduled for Friday, September 23 at Toyota Sports Center. The team will play a “Kings vs Kings” intra-squad game at Citizens Business Bank Arena in Ontario on Sunday, September 25.