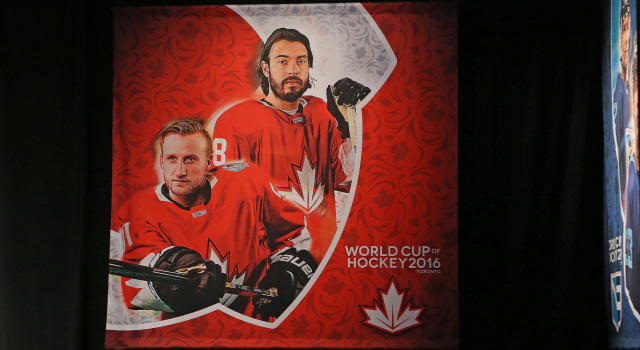 This is, of course, a reference to the pre-tournament schedule for the World Cup of Hockey, which for four entries, will be longer than the tournament itself. Yesterday, Finland edged Sweden on Olli Maatta’s overtime game-winner – which followed a tying Markus Granlund goal Jhonas Enroth would like to have back – as well as a one-goal Russia win over the Czech Republic (Czechia, anyone?) and North America’s 4-0 shutout of Team Europe, where someone by the name of Anza Kopitar snuck onto the ice.

The Real Kopitar finished with an even rating and four shots on goal in 20:28 of ice time, while Marian Gaborik drew a minus-one and took one shot in 14:55. The U-23 team’s defense may be suspect (so is Russia’s), but don’t understate their dark horse chance in this tournament.

Report is that Marian Hossa injury is not serious and that he has indicated to Ralph Krueger and the team staff that he will be fine.

JT Miller blocks a shot with his hand, heads off immediately and down he tunnel. AV must be thrilled…

Miller returned to the game, but, according to Mark Spector, was on the outside looking in during line rushes this morning.

Tonight, Jonathan Quick will be in net against Drew Doughty and Jake Muzzin as the United States faces Canada at 4:00 p.m. in Columbus. Quick, who will be backed up by Ben Bishop, isn’t expected to go the whole way. Expect Cory Schneider to get some time in when the teams turn around and meet in Ottawa on Saturday, and I’m with Torts here: why is there a back-to-back, with travel, for pre-World Cup tune-ups, prior to a season that will be compacted due to the addition of a bye week? (Answer: Because $$$.)

Today’s game will be televised on ESPNU; you can find tomorrow’s game on ESPN3.

Elsewhere, Kris Versteeg is “closing in” on a PTO from Edmonton, according to Darren Dreger.