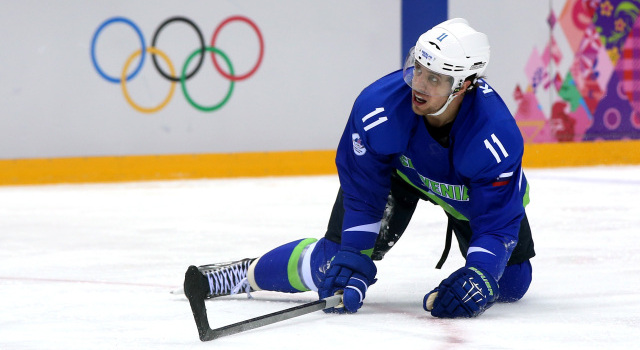 For the second time in as many qualification cycles, Slovenia emerged from a group that included higher ranked teams in Denmark and Belarus and won a winner-take-all game in an opponent’s home country to qualify for the Olympics. By virtue of their 3-2 shootout win over Belarus, Anze Kopitar and the Lynx qualified for Group B at the Pyeongchang Games, where they’ll be pooled with Russia, the United States and Slovakia, the exact same group they were placed in at the 2014 Winter Olympics.

Rok Ticar scored twice for Slovenia and netted the shootout winning goal before Gasper Kroselj denied Andrei Kostitsyn’s attempt to prolong the shootout. Kopitar’s forehand-backhand shootout goal is captured at 6:00 in the highlight package below.

“This was a finals game. A game 7. A decisive game – however you want to call it. The game that takes you to the Olympic games,” Kopitar said, as translated by Jernej, a good friend of LA Kings Insider.

More from Kopitar, on the competitiveness of the game:

“There were nerves at the beginning but I think we were able to direct those nerves in a very positive way and brought the game to the conclusion that we were hoping for.”

“Don’t know that we exactly wanted to give up those last two goals … but now that doesn’t matter anymore. This is the kind of game where your legs might be burning but you find those final few atoms of strength and an energy that you maybe didn’t even know you had.”

More on Kopitar’s history on playing for the Slovenian national team can be found here, courtesy of Henrik Manninen.

Norway and Germany also qualified for Pyeongchang, with groupings (and tournament seeding) below:

No decision has been made on whether NHL-based players will participate in Pyeongchang. The CBC’s Tim Wharnsby provided an update on Olympic and World Cup considerations earlier today.

Not too long after he arrived in Quebec City, Team Europe announced that Kopitar would serve as team captain, and that Frederik Andersen would be replaced by Philipp Grubauer, giving the team two German goalies in Grubauer and Thomas Greiss in addition to Slovakian Jaroslav Halak. Europe opens the tournament against the United States on September 17 and will also be pooled with Slovakia and Canada.

How's this for Team Canada's PP1?

#TeamUSA has hit the ice for its first practice of World Cup training camp at @NationwideArena. #WCH2016 pic.twitter.com/EGd4hSTymN

Want to say thank you to @VaughnHockey for my World Cup set up #USA pic.twitter.com/H8pdQWeG2g

A little team bonding out on the links. #TeamEUR #WCH2016 pic.twitter.com/nlQFsytCz5