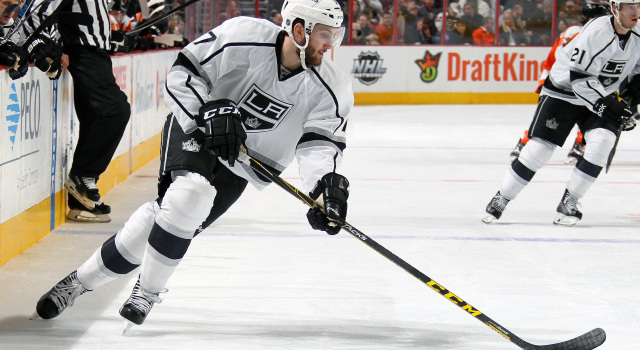 Restricted free agent defenseman Derek Forbort has signed a two-year contract extension with the Kings, as reported Saturday by Mayor’s Manor and confirmed by General Fanager. The new contract comes with a $650,000 average annual value.

The 6-foot-4, 212-pound left-shot defenseman became the final player from the first round of the 2010 NHL Draft class to play in the NHL when he made his debut early in the 2015-16 season. He ultimately recorded one goal, two points, a minus-one rating, 17 penalty minutes and 14 shots on goal in 14 games with Los Angeles and two goals, 10 points, a plus-13 rating and 40 penalty minutes in 40 games with AHL-Ontario. His secondary metrics, over a scant 143:51 of five-on-five play with the Kings, were impressive. He led the team with a 62.3% Corsi-for percentage (again, SAMPLE SIZE), though he was handled a bit with kid gloves; the Corsi-for percentage of his opponents was the lowest rate on the entire team, while his zone starts were skewed away from the neutral zone, and slightly aligned with the attacking end of the ice.

It’s an important year upcoming for Forbort, who is looking to make the full-time transition to the NHL. The Duluth, MN native cracked teen-minutes in only three of his 14 games, and when the club needed a defenseman in the second half of the season, it chose to recall Kevin Gravel to see how his game would transition to the NHL level. Both Gravel and Forbort appear to be in the mix for a 5-6-7 defensive role along with Matt Greene, Rob Scuderi, Zach Trotman and Tom Gilbert. All, other than Gravel, would have to clear waivers if the team attempted to assign them to Ontario. As with the forward group, there’s always the possibility of a trade during circumstances in which there are too many players battling for a limited number of jobs.

It’s hard to say how exactly this will affect the Kings’ cap because of the strong competition for depth roles on the roster, and there will still be personnel movement in advance of the start of the season. As of today, based on financials provided by General Fanager, the Kings have allocated approximately $71.68M to 23 players for the 2016-17 season, figures that include Mike Richards’ cap recapture but not the cap hits for Michael Mersch ($787K), Gravel ($668K), Forbort ($650) or Nic Dowd (RFA), four rookies with an opportunity to earn a spot on the team. Should these players unseat a more expensive asset already under contract, the team’s combined payroll would be reduced further. Teams may have up to 23 players on the active roster; the 2016-17 salary cap has been set at $73M.

Los Angeles’ remaining RFAs are Dowd, Jack Campbell and Andrew Crescenzi. According to hockey operations, with Forbort signed, Dowd is next in line for a new contract.