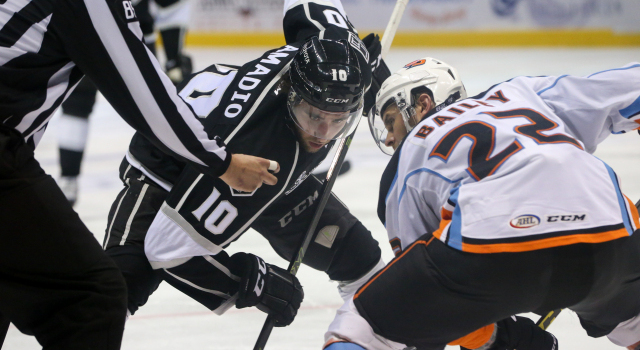 Mike Amadio has this whole development camp thing down.

Compared to his peers the 20-year-old forward is a step ahead as far as experience goes. Amadio joined the Ontario Reign as a “Black Ace” in last season’s playoffs and comes into development camp familiar with the process and familiar with the staff.

“It’s definitely a little more comfortable being here, obviously,” Amadio said after Tuesday’s late session. “Being with the Reign and just seeing the coaches and being with the development staff in the summers and here over the past year, it’s definitely nice and it’s easier to come in here kind of knowing what to expect and what the guys expect from you.

“It’s going to be a lot of hard work, I know that, and looking forward to the rest of the week.”

The work is well, to put it simply, all about the development of the players and the details of the game whereas during training camp in September everything shifts to a focus that is “a lot more game-like,” Amadio said.

As far as this week goes with the younger players in the organization, it’s a bit of a homecoming for Amadio and a chance to be a leader.

“I’ve been around some of these guys and I’ve known them for a couple years now so it’s nice to see them and just talking to some of the younger guys, just telling them what to expect and stuff like that,” Amadio said.

Amadio may be more comfortable in his surroundings, but he said that doesn’t make things any easier.

Amadio, a third round pick by the Kings in 2014, came to the Reign after a 50-goal season with North Bay (OHL) and head coach Mike Stothers is looking for him to take on a bigger role for the coming season with the Kings’ AHL affiliate.

“I was pretty impressed with the way he came in and played for us, and now we have an idea of what to expect from Mads when he comes back,” Stothers said on Tuesday. “You know what, we’re going to challenge him to be even better. Again, there are going to be some growing pains for him. You look at it, he played I think 11 playoff games with us and he had one goal. I mean, that’s not bad, but that’s not enough. So we’re not naïve enough to think that this kid, just because he scored 50 in his last year in junior he’s going to walk into his first year in the American Hockey League and score 30 goals.

“He didn’t do that in his first year of junior. It’s going to take some time. But what you see is a pretty good hockey player – great hockey sense, great awareness on the ice, makes plays and can make some things happen. That’s something that we need in the organization, somebody that can create some situations where we can score. That’s a premium here in all of hockey. Everybody’s teaching the defensive side. You still need some guys that are creative, so we’re hoping that Mads can provide that for us.”

While Stothers has in mind what he likes about Amadio’s game and what his expectations might be, the player himself isn’t looking too far ahead, at least not yet.

“Not really, not as of lately,” said Amadio when asked if he’s thought about his goals for next season. “I kind of just took a couple weeks break from the year and then I just started getting back into it about two weeks ago maybe. I haven’t had too much time to think about it but from now on I will.”

Amadio, on his highlight of the summer so far:
Probably just coming off the year I had and with the Reign and all that. It was a pretty exciting year and it’s going to be a long summer with hard work and I can’t wait to come back for camp.

Amadio, on if players take to junior what they learn at development camp:
It’s definitely a learning experience here. The development guys teach you all the little things that you might not think about in your everyday game. So it’s nice to come here, learn all that, and apply it to your game in junior or wherever you go back to.

Amadio, on if he could tell the effect on camp after going back to junior last season:
Yeah, for sure. I think you might not see it right away for some guys, others you might, if not then you’ll definitely start to see if after a couple games and you’ll start seeing it throughout the year.

Amadio, on what development camp is like:
The morning skate is split up into two groups, forwards and D. The forwards work on — I guess you’re dissecting the offensive game or what forwards need to do and how to be better that way. The afternoon skate’s with everyone — mini-games … we were playing 3-on-3 and 4-versus-4, just trying to apply the things we work on in the morning out here in the afternoon and see what it’s like in game situations.

Amadio, on whether development camp is easier this time around:
I don’t know if it’s easier. It’s obviously a lot of hard work every year but I’d just say I’m a little more comfortable being around from previous years and knowing what to expect.

Amadio, on whether confidence is derived from comfort level:
The first day a lot of guys come in with nerves and stuff like that so the first practice you might see a couple missed passes or something like that but now after the second day you’re starting to see crisp passes and everything’s going well.

Amadio, on what he’ll do after development camp:
I’ve been at it (training) for about two weeks now. I’m going to keep that going on and off the ice. I workout five days a week off the ice and on the ice I’ll probably skate two or three times [a week] this month and then when it gets closer to camp probably four or five times a week.