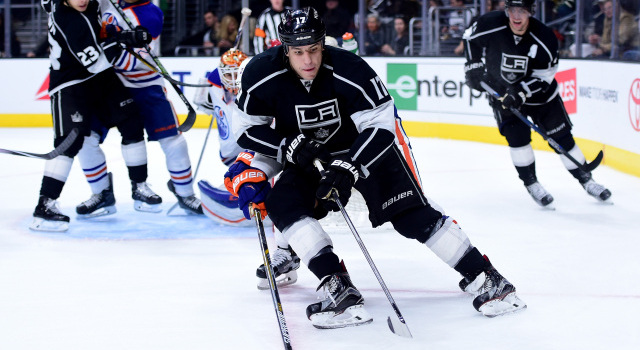 Milan Lucic’s tenure in Los Angeles was a brief one. The hulking power forward will remain in the Pacific Division after signing a seven-year, $42-million contract with the Edmonton Oilers, via Pierre LeBrun. LeBrun reported a last-gasp chance by the Kings to work out a contract, but there was no way they would’ve been able to match the term and value of such a contract, given that Tyler Toffoli and Tanner Pearson are entering contract years and Drew Doughty will need a new contract prior to the 2019-20 season.

In 81 games with Los Angeles, Lucic totaled 20 games, 55 points, a +26 rating and 79 penalty minutes. I’ve recently written about the ill-fated trade and the circumstances that brought Lucic to the Kings; to catch up, click here.

Lucic and the Oilers will play at Staples Center on November 17 and April 4 and at the brand new Rogers Place on December 29, March 20 and March 28.

As noted earlier, the Kings’ targets are a top-six forward and a right-shot defenseman. They’re not expected to be in the mix for any of the top names in free agency, and given some of the contracts that have already been handed out, such restraint is probably a good thing.

Among the defensemen, a source has told me that Los Angeles hasn’t targeted Ben Lovejoy or Kris Russell. Lovejoy is a right-shot defenseman; Russell shoots left.

Tom Gilbert to LA, one year, $1.4M per @DougMaclean