Greene passes through waivers, is not bought out 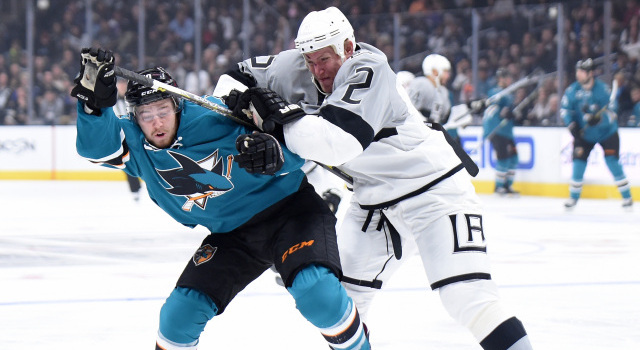 LA Kings took one last shot at Milan Lucic yesterday, which is why Matt Greene was placed on buyout waivers. But didn't come close on Lucic

There are a whole lot of bodies on the back end: Greene, Drew Doughty, Alec Martinez, Jake Muzzin, Rob Scuderi, Brayden McNabb, Tom Gilbert, Kevin Gravel, Zach Trotman and Derek Forbort. Several of those players will be candidates to play in Ontario, and some may be waiver-bound again after training camp, so there’s no finalization at this point of what the back end will look like come October 12. There’s also a glut of forwards, and there exists the possibility that the team could exchange a forward under contract for next season for a defenseman who can slot behind Drew Doughty. We’ll learn more of the potential for these plans through correspondence with hockey operations and perhaps some Dean Lombardi media availability in the coming days and weeks.

It should be noted that the Kings did sign two depth right-handed defensemen in Gilbert and Trotman, so there could be competition for the type of role Greene has occupied in the past. This will be a topic LAKI will revisit throughout the summer.

As has been noted ad nauseam today, it’s difficult to provide exact financials because there are too many players under serious consideration for roster spots, and there will still be personnel movement in advance of the start of the season. But, as of this afternoon, the Kings have allocated approximately $72.51M to 23 players for the 2016-17 season, figures that include Mike Richards’ cap recapture and the cap hits for Greene, Zatkoff and Latta. The 23 combined cap hits do not include the contracts for Gravel ($668K), Michael Mersch ($787K) or Nic Dowd (RFA), three rookies with the best opportunities to earn a spot on the team, nor does it account for Trotman’s $650K. Should these players unseat a more expensive asset already under contract, the team’s combined payroll would be reduced further. Teams may have up to 23 players on the active roster; the 2016-17 salary cap has been set at $73M.