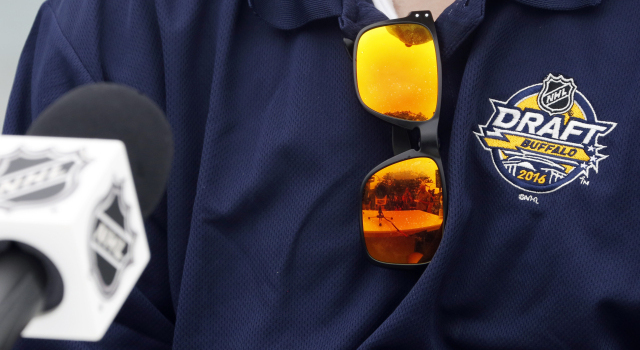 Good afternoon from Buffalo, where the Kings contingent has reconvened after a brief lunch in advance of the first night of the NHL Draft.

Earlier today I spoke with Dean Lombardi, who expressed doubt that the Kings would trade an entrenched roster player for draft picks. (Keep in mind Los Angeles has four selections in this year’s draft and will be looking to add to that number, if such an opportunity arises.) This is due, in part, to the team and Milan Lucic not being able to come to an agreement, which decreases flexibility in personnel movement. If a current roster player is traded, it would be for another player, and most likely a defenseman who could play on the right side.

Michael Russo of the Minneapolis Star-Tribune reported two days ago that the Kings have inquired about Christian Folin. He fits the bill of what Los Angeles is looking for, so this isn’t a huge surprise. If there is a young, right-shot defenseman who carries a palatable cap hit – Folin’s is $725K – Los Angeles has also almost certainly inquired about him. I also asked whether the Kings are interested in Buffalo’s Mark Pysyk, and the response that I received from a source was that the team was interested, but there weren’t any real discussions over a defenseman who has strong advanced metrics but would necessitate a higher return going the other way than Folin. I’ve had the sense that the team has looked at Pysyk in the past, but the price tag for the 23rd overall pick in 2010 might be higher than what the team would be comfortable surrendering.

So there’s that. The team is generally active at the draft – last year’s trade for Lucic was consummated shortly before the first night of the draft began – but I’m not anticipating anything major in the cards tonight.

Fellow Wolverine Dirk Hoag, formerly of Predators blog On The Forecheck, recently released his annual chart of miles traveled by NHL team. The Kings will travel 45,742 miles this coming season, the sixth most in the league. The top six teams in miles traveled are all Pacific Division teams, led by Edmonton’s whopping 49,272. Hopefully that’s a comfortable charter. The team that will travel the fewest miles this year is the New York Islanders, who clock in at 32,425. Los Angeles’ 16 back-to-backs are tied with eight other teams for the sixth most in hockey; Buffalo and Columbus lead in back-to-back sets with 19, followed by New Jersey, Toronto and Philadelphia with 18.

Lots more to come from Buffalo, Insiders. Enjoy your Friday evening. A running live blog will begin upon arrival at the First Niagara Center.