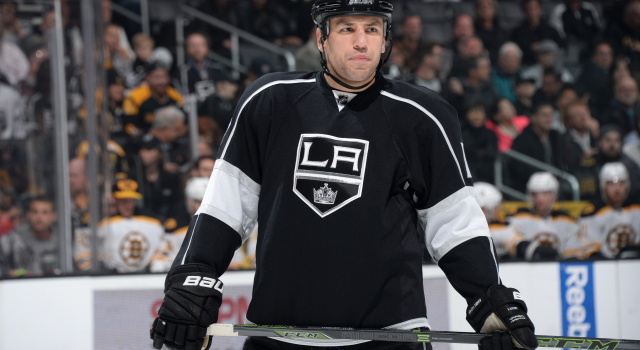 Based on conversations with team sources, Milan Lucic and Dean Lombardi had met yesterday at Toyota Sports Center, but based on the above news, obviously weren’t able to come to any agreement. The Kings will now be able to spend their available capital elsewhere, which was a Plan B of sorts, given the “priority” placed upon trying to come to an agreement with their to-be free agent winger.

One particularly challenging though tangential aspect of this news is that had Lucic re-signed, Los Angeles would’ve had the flexibility to move a young forward or forward prospect for a young defenseman in an effort to deal from a position of strength for a position of need. This does open up the door for Trevor Lewis to re-sign with the club, though Lewis should be expected to command a pay raise above his $1.55M cap hit from the last two seasons. Kris Versteeg is also bound for unrestricted free agency, as are Luke Schenn and Jamie McBain on the back end.

This does not represent strong asset management. There was a unique set of circumstances – such a move was precipitated, in part, because of the team’s legitimate fear that Martin Jones would be signed to an offer sheet, as noted by Frank Seravalli of TSN, who reported that San Jose General Manager Doug Wilson had notified Lombardi that an offer sheet for Jones was possible – but to lose Jones, a first round draft pick, and highly regarded defensive prospect Colin Miller for one year of Lucic is not a hallmark moment of Lombardi’s tenure, especially in the context of having traded defensive prospect Roland McKeown and a first round draft pick for 16 games of Andrej Sekera in 2014-15. Lombardi and his staff have connected more often than not on trades and in asset and personnel management, but this is still a tough blow for the team.

Given that Lucic was looking for extended term on his contract, and the Kings will now be on the hook for $10M per year of Anze Kopitar through 2024, will have to negotiate a new contract with Tyler Toffoli in the coming year, and will be tasked with signing Drew Doughty to a new contract after the 2018-19 season, such term and expense would present a challenge to a team already beset by decreased production from certain expensive players currently on the books.

The Kings have allocated approximately $65.18M to 18 players for the 2016-17 season, dollar figures that include Mike Richards’ cap recapture and settlement. The 18 combined cap hits do not include the contracts for Kevin Gravel ($668K), Michael Mersch ($787K) or Nic Dowd (RFA), three rookies with the best opportunities to earn a spot on the team. Teams may have a maximum of 23 players on their active rosters. For a list of players due for unrestricted free agency, click here.

For more on this year’s free agent crop, Craig Custance of ESPN.com ranks the top 25 targets in an ESPN Insider piece. The Kings were referenced alongside names such as Keith Yandle, Loui Eriksson and Andrew Ladd, the latter of whom Custance noted interested Los Angeles at the trading deadline.