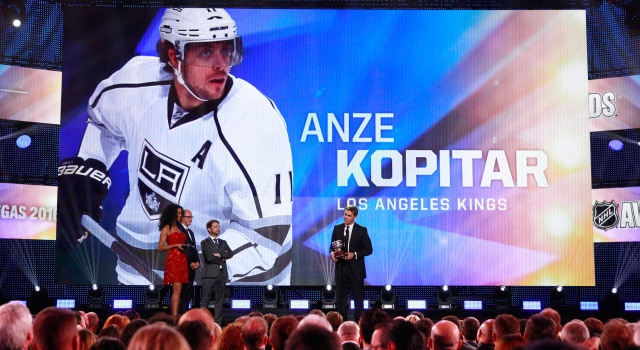 The Kings’ newest captain came away with a pair of trophies on Wednesday, winning both the Frank J. Selke Trophy, awarded annually to “the forward who best excels in the defensive aspects of the game” and the Lady Byng Memorial Trophy, presented to the player “adjudged to have exhibited the best type of sportsmanship and gentlemanly conduct combined with a high standard of playing ability” at the NHL Awards in Las Vegas.

Drew Doughty was also the Norris Trophy winner, while Jonathan Quick finished in third place for the Vezina.

Kopitar beat out Patrice Bergeron and Ryan Kesler for the Selke and Aleksander Barkov and Loui Eriksson in a more lopsided Lady Byng vote. These are the first league trophies won by Kopitar, though he had been a Selke finalist in both 2014 and 2015 and a Lady Byng finalist in 2015. By winning the Selke, Kopitar became only the second player on a team in the Pacific or Mountain Time Zones to win the award since Ryan Kesler did so while playing for Vancouver in 2011. The award has been presented annually since 1978.

Luc Robitaille accepted the Selke for Kopitar, who wasn’t at present at the awards ceremony. Prior to the awards, Bergeron spoke with LA Kings Insider about the center with whom his excellent two-way play is often referenced alongside in comparison.

“First of all, the pride that he takes in all areas of the game [sticks out],” the Boston Bruin said. “Obviously that makes it really hard for any opponent, and to me, it’s his smarts, also. He’s such a complete player, and the way he handles himself at both ends makes him the player he is. He’s so effective, and he’s a tremendous player.”

While speaking to the media after capturing the Norris, Doughty spoke about his teammate with a great deal of pride.

“He deserves it,” Doughty said. “No one plays harder than him. Well, I shouldn’t say ‘no one.’ There are a lot of guys that do. But in my mind, he’s one of the best two-way centers in the league, and I’d put him right there with Toews, with Bergeron, Getzlaf, all those guys who are just great two-way players, and for him to win it, he deserves it. He’s a phenomenal player, and I wouldn’t have won [the Norris] without Kopi and the rest of my teammates, so he’s a big part to that.”

Kopitar ranked third in the league in shot attempt plus-minus, which reflects an ability to play infrequently in the defensive zone, and his 53.5% faceoff rate was a career-high. Kopitar’s on-ice shots against per 60 minutes during five-on-five play was 25.7 – a better shot suppression rate than both Kesler (26.1) and Bergeron (27.7), and his goals against per 60 minutes rate of 1.8 was considerably better than Kesler (2.0) and Bergeron (2.1).

For a full evaluation on Kopitar’s season, click here. For more on the competition for the Selke, Lady Byng and Vezina trophies, click on the blue text.