The $73M salary cap and how it affects the Kings 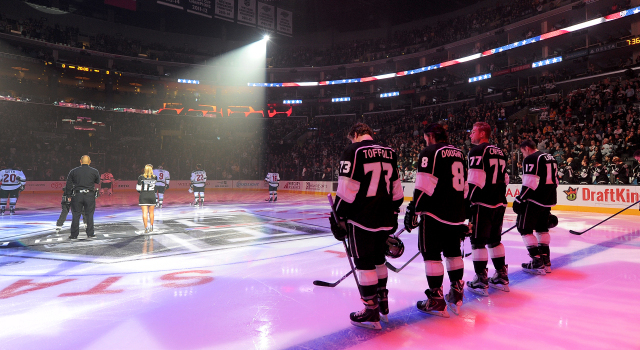 The NHL and NHLPA jointly announced a $73M salary cap ceiling on Tuesday afternoon, a figure that began to come into focus by virtue of Renaud Lavoie’s report last week that the NHLPA was expected to exercise its 5% escalator clause. The rise is a modest $1.6M increase from last year’s cap of $71.4M.

This, of course, leads to the OH MY GOD OH MY GOD OH MY GOD HOW DOES THIS AFFECT LUCIC questions, and those questions aren’t quite yet ready to be answered at this moment in time. Based on financials provided by General Fanager, the Kings have allocated approximately $65.18M to 18 players for the 2016-17 season, dollar figures that include Mike Richards’ cap recapture and settlement. The 18 combined cap hits do not include the contracts for Kevin Gravel ($668K), Michael Mersch ($787K) or Nic Dowd (RFA), three rookies with the best opportunities to earn a spot on the team. Should they unseat a more expensive player already under contract, the team’s combined payroll could be reduced further. Teams may have up to 23 players on the active roster.

In addition to Milan Lucic, other unrestricted free agents are Trevor Lewis, Kris Versteeg, Luke Schenn, Jamie McBain and Jhonas Enroth. Lewis, who is coming off a two-year, $3.05-million contract, will see a pay increase that would likely price him out of Los Angeles’ plans should Lucic re-sign with the club. I’m still receiving questions about whether Dustin Brown could be traded to help alleviate the cap crunch – Brown carries a $5.875-million cap hit through 2022 – but no other NHL teams are willing to take on his contract, based on multiple conversations with team and outside sources.

I wrote yesterday about Lucic and attempts to resign the power forward, and as noted, the team is expected to make its strongest offer early this week. Players bound for unrestricted free agency may begin to negotiate with new teams at 12:01 a.m. ET on June 25, though they won’t be able to sign new contracts until noon ET on July 1.