Big week ahead for Kings, Lucic 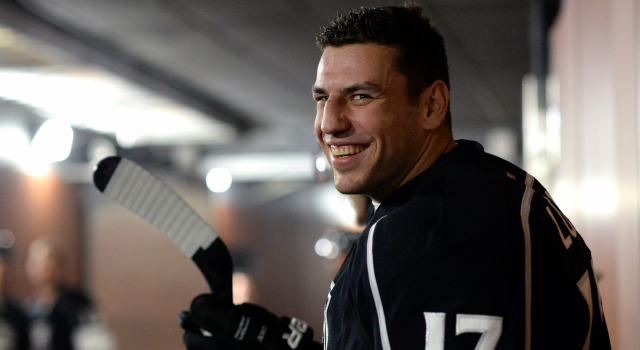 Insiders! It’s the most wonderful time of the off-season, if such a thing exists. Just think: home openers are announced today (Los Angeles is expected to open up at San Jose on the first Wednesday of the regular season before returning home to welcome Philadelphia to Staples Center), the full schedule comes out tomorrow, which will be followed by the NHL Awards on Wednesday and the meeting in which the Board of Governors are likely to approve expansion to Las Vegas. The salary cap is also expected to be revealed around this time, which will be followed by the NHL Draft in Buffalo this Friday and Saturday and the inevitable trades associated with it. As is tradition, LA Kings Insider will be on site in both Vegas and Western New York to report on this league news as it relates to the Kings.

Also coming this week: Los Angeles’ best offer to Milan Lucic, apparently. I had hoped to share this with you over the weekend, but newborn carin’ and Father’s Day celebratin’ got in the way, so it will officially kick off a busy week at traveling LAKI HQ.

Said Dean Lombardi, when asked about the state of Lucic negotiations last Thursday: “I think it’s pretty safe to say we’ve had to do a lot of work here, given some of our due diligence. It’s probably safe to say we will be making – I guess we want to say – our best offer, under the circumstances probably early next week, is probably when I envision this. There’s a lot of due diligence that goes into formulating an offer. There is no question we want him back and I think he clearly wants to be here, but there are a number of things we had to work through that we didn’t anticipate. But we haven’t given up. So, we’ve had a number of conference calls on how to structure this under the circumstances and I think we’re going to have something here, I envision by early next week. And that will give him some time to think about it, but after that, I don’t think there’s much more work we can do given what we’re up against.”

Last week, a team source acknowledged that talks with Lucic, which appeared to have previously quieted, were “ongoing,” and that resigning the forward was a “priority.”

Whether you’re in the camp that advocates re-signing Lucic or cutting bait, were the Kings to re-sign the power forward, it would allow them flexibility to be able to trade for a young defenseman that could enhance the depth on the back end, based on conversations with team sources. Don’t expect any major news one way or another so early in the week. If Los Angeles re-signs Lucic, reports will emerge shortly beforehand, followed by an official press release. If the team decides to move on, the realization could come in the form of reports of new contracts to the team’s other UFAs – namely, Trevor Lewis. The Kings will be hard-pressed to sign Lewis in addition to Lucic without getting highly creative, so if L.A. announces a new contract for Lewis, it’s likely an indication that Lucic will be moving on to greener pastures. (There’s a drought here; our pastures are golden-hued.)

The NHL’s salary cap, based on reports and foresight, appears to be in the range of $73-million for 2016-17. That’s based on the players exercising their 5% escalator clause, which seems like a good bet. Los Angeles has allocated $64.843M to 19 players for the 2016-17 season, dollar figures that include Mike Richards’ cap recapture and settlement but not the retention-affected $2.25M cap hit for Vincent Lecavalier, who has confirmed that he is retiring. Teams may have up to 23 players on the active roster.