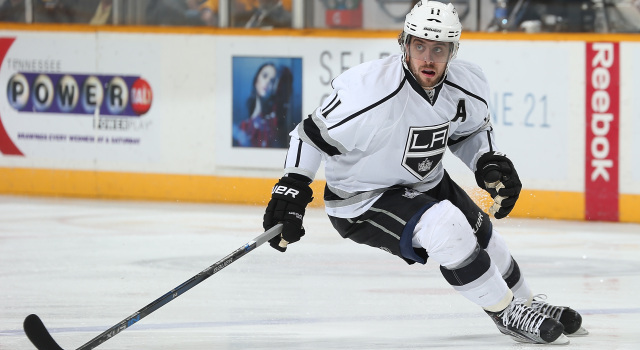 Multiple sources have confirmed to LA Kings Insider that Anze Kopitar has been selected as the new captain of the Los Angeles Kings. His captaincy follows that of Dustin Brown, who was named captain prior to the 2008-09 season and helped guide the Kings to two Stanley Cups, representing a successful ascension of the franchise in which the team emerged from a rebuilding process to become among the league’s competitively elite teams earlier this decade. (UPDATE: The team has issued a press release to confirm this.)

Through conversations with team sources, among the prevailing views I’ve received on the decision to name Kopitar captain is that the team is now “Kopi and Drew’s team,” to put it colloquially. Though there are no confirmations at this time – and I’m not sure how such a decision will be or has been handled – but it is expected that Drew Doughty is likely to serve as an alternate captain this coming season. Doughty first wore an “A” on his jersey in a regular season game in 2015-16.

Plenty more on this subject will come throughout the day; Dean Lombardi is expected to address the media at 11:30 a.m.

Via the Kings’ press release:
Kopitar is set to begin his 11th season with the Kings, and he’s served as an assistant captain for the team since 2008. This past season, he led the Kings in scoring for a record-setting ninth consecutive season, totaling 74 points (25-49=74) in 81 regular season games. He added an additional four points (2-2=4) in five post-season games during the recently completed 2016 Stanley Cup Playoffs. Kopitar signed an eight-year contract extension with the Kings on January 16, 2016. The contract extension begins with the 2016-17 season and runs through the 2023-24 season. Kopitar is a two-time Stanley Cup winner (2012 and 2014), and he ranks sixth on the Kings career scoring list with 684 points (243-441=684) in 764 career regular season games. On the Kings career post-season scoring list, Kopitar ranks third all-time with 64 points (20-44=64) in 75 career post-season games. Kopitar is a 28-year-old native of Jesenice, Slovenia. He was drafted by the Kings in the first-round (11th overall) of the 2005 NHL Entry Draft and he made his Kings/NHL debut during the 2006-07 season.

Brown, who in 2012 became just the second American-born captain to hoist the Stanley Cup while sharing the playoff scoring lead with Kopitar (each had 8-12=20 in 20 post-season games), is also a two-time Cup winner. He’s spent his entire NHL career with the Kings, totaling 470 points (218-252=470) in 884 career regular season games (ranks fourth all-time for games played, regular season), and an additional 46 points (19-27=46) in 81 career post-season games (tied for third all-time for games played, postseason). Brown, a 31-year-old native of Ithaca, New York, was drafted by the Kings in the first-round (13th overall) of the 2003 NHL Entry Draft and he made his Kings/NHL debut during the 2003-04 season.