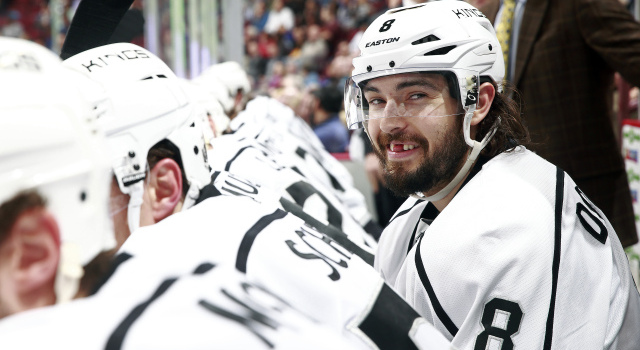 The good: Vying to become the first King to claim the Norris Trophy since Rob Blake in 1998, Drew Doughty emerged with his finest season as a professional, showing excellence in all areas of the ice and finishing third in the league with a net total of over 2,297 minutes of ice time. Though his 59-point sophomore season remains his highest point total in the NHL, his complete package has so thoroughly evolved from the 2009-10 season, a process that began in earnest in 2011-12 when his defensive game began hardening into form over the second half of the season and in the playoffs. He’s now the most highly skilled and versatile two-way defenseman in the game; whether he’s the best overall defenseman in the sport likely comes down to the credence you place in possession numbers and advanced metrics. That’s not a knock on the use of such data, but rather the emphasis of the oft-stated LAKI position that possession stats are a highly valuable tool but not the be-all, end-all of player evaluation. Before this devolves too much into a Doughty vs Karlsson debate – we’ll rehash that at the NHL Awards next week – Doughty did post the highest Corsi-for of his career at 58.9% and ranked third in the league amongst defensemen with a 56.7% on-ice shots-for percentage. His ability to make nuanced, small plays to create space or leverage off a defender or buy himself or a teammate additional time is a thoroughly delightful aspect of his game to watch. He’s outstanding at protecting the puck, though he was also highly notable when the puck was on an opponent’s stick. He ranked eighth amongst defensemen with an average of 25.6 SA/60 in five-on-five play, and despite regularly seeing the ice against the opposition’s top players, Doughty’s 1.65 GA/60 was tied for seventh in the league. A mid-season All-Star, Doughty passed Steve Duchesne for sole possession of second place on the team’s all-time list of points by a defenseman; he now has 318 career points, good for 17th place on the team’s registry and 176 points behind Rob Blake for the most ever by a Los Angeles rearguard. Prior to the season, the team had called on Doughty to continue to develop his leadership qualities while the incubators had been removed. “We’ve had to put him in a different role,” Darryl Sutter said. “Until we got Rob Scuderi, it was a pretty young defense, so obviously he’s in a different role than he’s been in in the past because of the veterans that have sort of surrounded him.” The team was encouraged by Doughty’s growth in that area, and the defenseman became a more regular figure in the type of leadership committee meetings that all teams utilize. Sutter also shared effusive praise towards Doughty’s status atop the hierarchy of league defensemen, saying, “he’s head and shoulders above every other defenseman in the league.” After the season, Dean Lombardi also shared a thorough endorsement of Doughty’s Norris Trophy campaign, saying, “what makes him special, unless you really understand the game and see some of the things he does, you have to study the game, not watch the game and realize what he does is really special, and it has nothing to do with the highlights and the points and all this stuff.” Some of the most impressive Doughty praise this season, though, came from Winnipeg Jets coach Paul Maurice, who sounded as if he’d throw his full support behind a Doughty Norris, were coaches permitted to vote. “They’ve got a nice, solid, strong hockey team there, and sometimes you start to undervalue the individual because the goaltender can do some great things and they have powerful forwards up front,” he said. “I’m not comparing the style of play, but you had to watch Nick Lidstrom play a lot of games before you fully appreciated how great he was, not because he wasn’t going coast-to-coast and he wasn’t “spin-o-rama.” He was just making the right play. So slightly different styles, but in terms of value to a team, a guy who can play that many minutes, play against the other team’s best and at the same time generate numbers on a bit of a defense-first [team] – I think five-on-five we’ve scored as many goals as they have, [but] our records aren’t even close to being the same because there’s a different structure to what they do – he’s one of those players. I don’t know if it’s fully appreciated. I don’t think it’s a bias. I think it’s just human biology. People go to bed early. You don’t watch the third periods of a lot of games when you’re on the east. This guy’s a dominant defenseman in this league, dominant.” 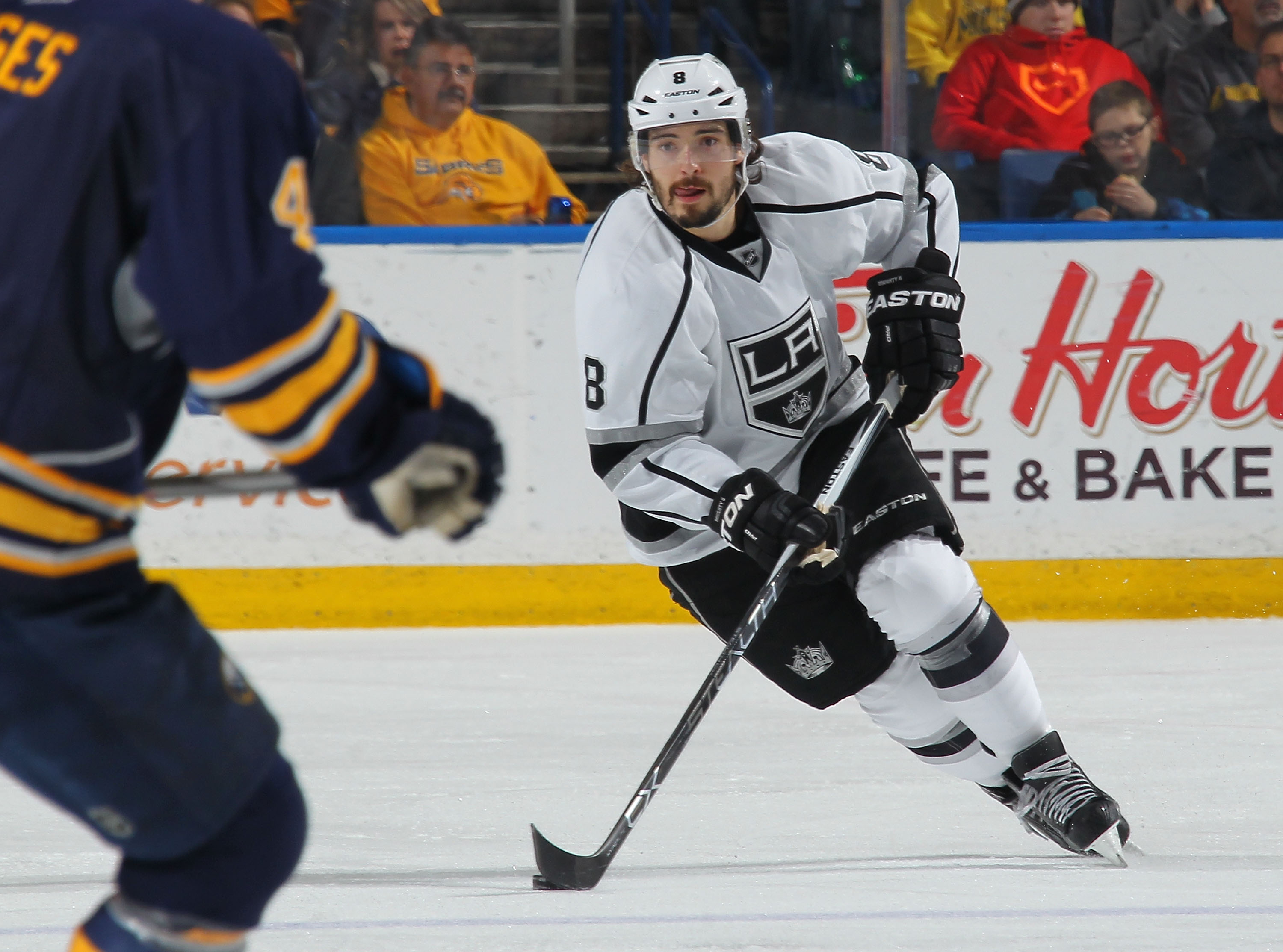 The bad: Not a ton, but there were some valid, if middling, concerns. Doughty’s points came disproportionately on the power play; that’s not necessarily a “bad” thing, as he tied a career-high with nine power play goals and was partly responsible for Los Angeles’ moderate improvement on the man advantage to eighth overall from 2014-15 to 2015-16, a time frame in which Doughty leapt from one power play goal to nine. But it did mean that his 0.65 five-on-five points per 60 minutes tied him for 78th in the league, a rate that was below half of Erik Karlsson’s 1.56 Pts/60 5v5 scoring rate. And as much as Doughty emerged as a well-regarded part of the team’s leadership core, there was still the occasional bulletin board material that the brash and confident defender left for opponents. It might’ve seemed innocuous that night, but his post-Game 3 declaration that the Sharks were “thinking a little bit about it now, so we’re right where we want to be” was interpreted clearly by San Jose as disrespect, with Logan Couture referencing Doughty’s observation following the visitors’ series close-out win in Game 5. Doughty also took a penalty for seven consecutive games in November, a streak that Darryl Sutter (and Doughty, for that matter) didn’t appear to be particularly pleased with. And, as always, there’s the concern over Doughty’s usage, which was 59 seconds below his rate the season prior but still extremely high. Is that a bad thing? “You’d rather spread it out as much as you can, but when you’re top-heavy with a guy like Drew and Muzz and those guys, they’re going to have to play more,” Sutter said. “That’s going to be our best chance of winning.”

Going forward: Signed through 2019 with a $7-million cap hit, Doughty provides excellent and much needed value for a team pressed up against the salary cap. He’s part of the Holy Trinity that includes Anze Kopitar and Jonathan Quick, and as long as that tri-force is together, Los Angeles has as good of a base as virtually any NHL team to build around (though Kopitar’s rising price does complicate the need to surround the group with viable supporting pieces and young players on entry-level contracts). The Kings will be looking to reinforce their defense, preferably with a right-handed shot if available, which could off-set some of the extra minutes that Doughty has cannibalized by virtue of his all-situational usage. One question heading into training camp is who will vie to open the season as his defensive partner. In his minutes alongside Brayden McNabb (far and away his most frequent partner), the duo posted an excellent on-ice GA/60 rate of 1.42; alongside fellow Team Canada rearguard Jake Muzzin, they were a near-identical 1.43. By the time he arrives in Los Angeles, he’ll already have (presumably) taken part in a large swath of World Cup games for tournament favorite Canada. Entering his prime years, there’s nothing to suggest that Doughty’s 2016-17 performance will differ greatly from his accomplishments in 2015-16, which is a good thing because he’s the best all-around defenseman in hockey. Expect him to wear an “A” on his jersey and have another stellar year. 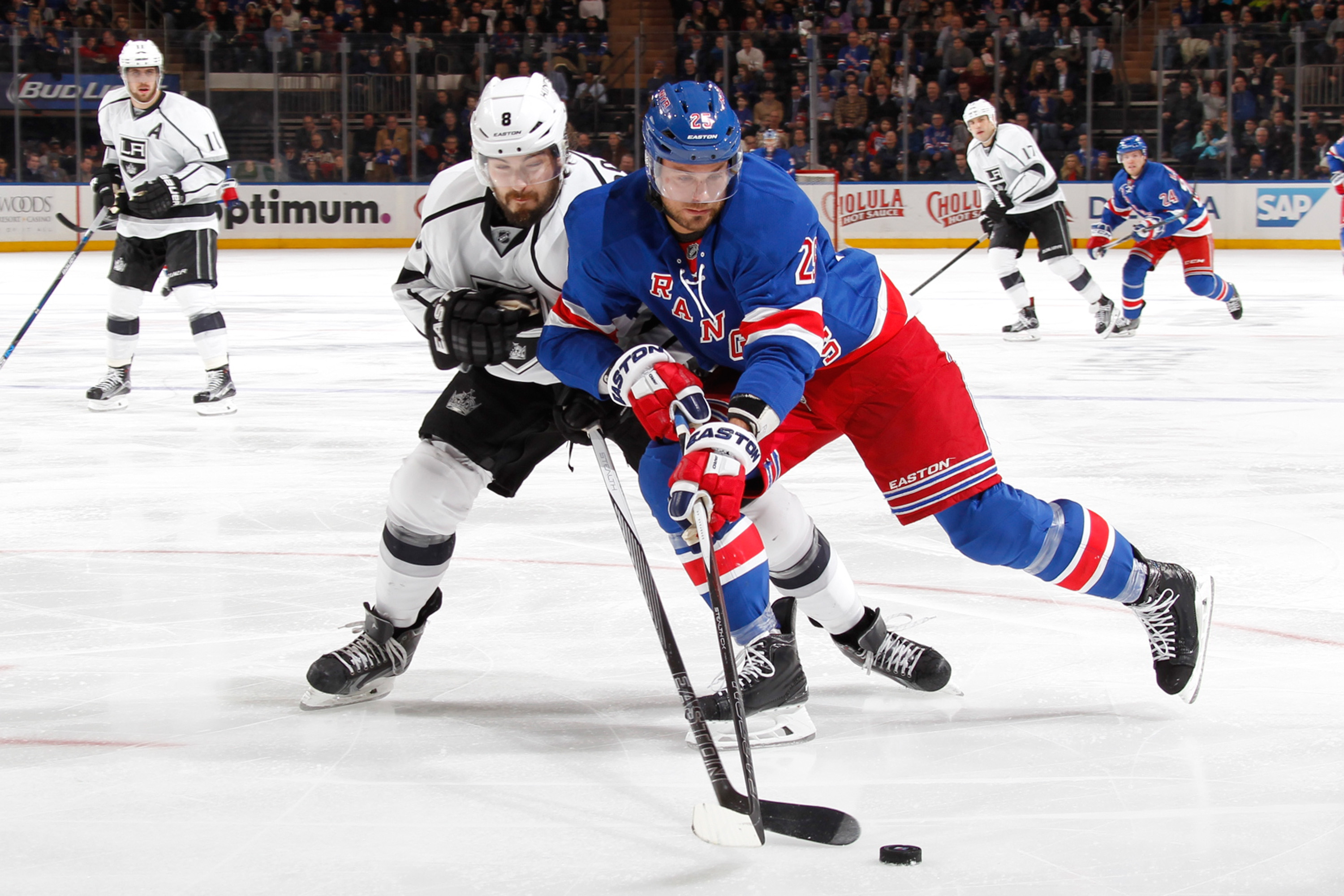 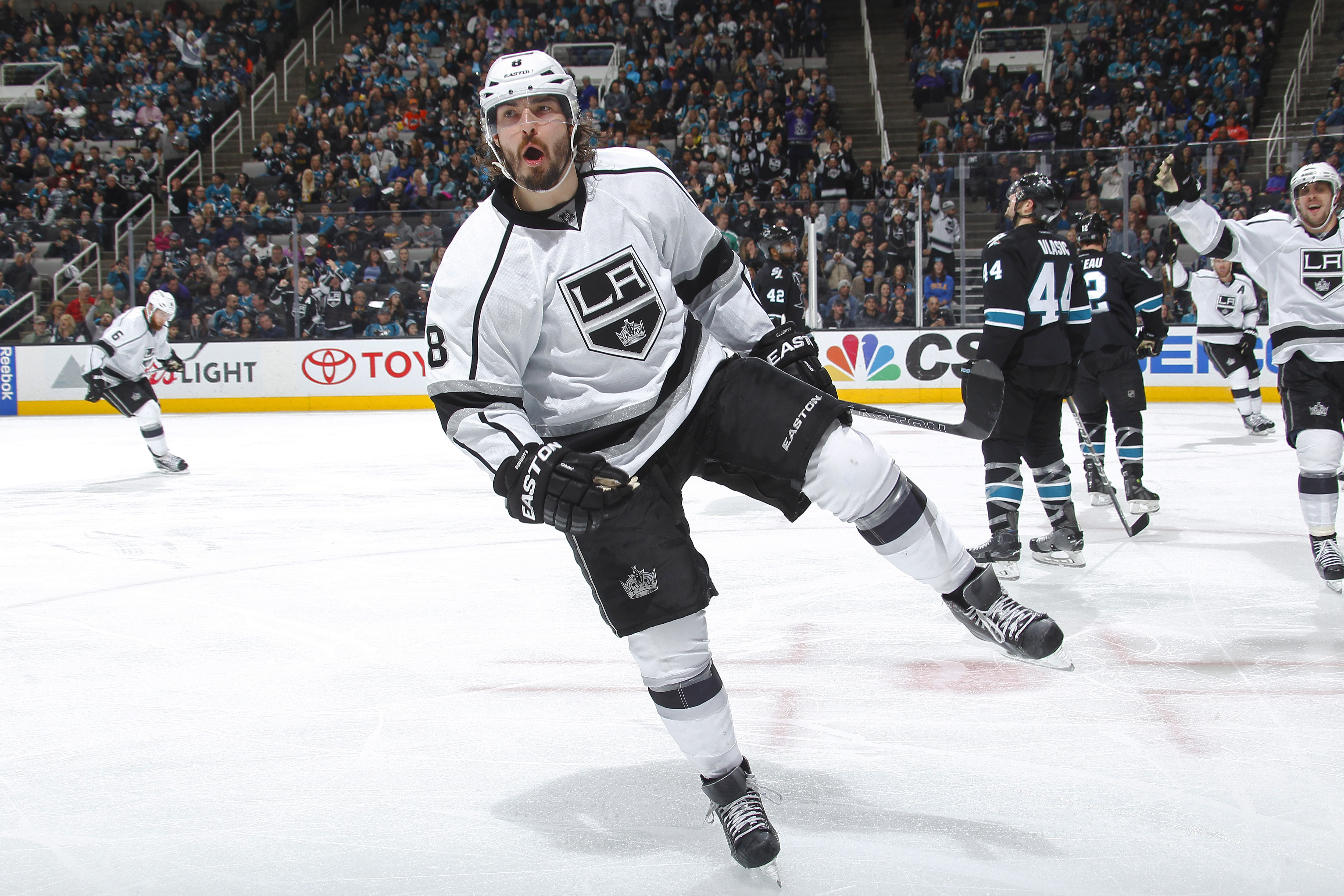