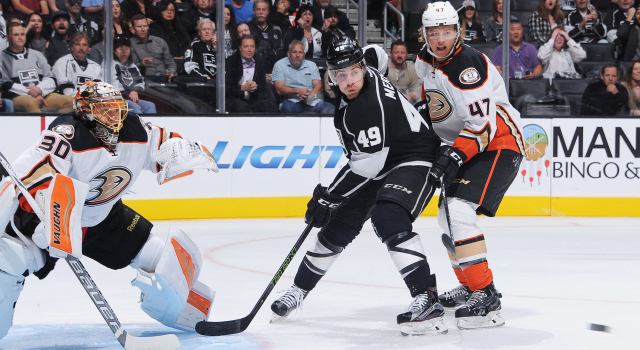 The Los Angeles Kings will begin their 50th season in the National Hockey League by playing an intra-squad game plus a total of eight pre-season games against the Coyotes, Ducks, Avalanche, Oilers and Stars. The full schedule:

Tickets for preseason games at Staples Center will go on sale later this summer, while ticket packages for the Kings vs Kings game in Ontario can be purchased here and are also included with all Ontario Reign full season packages. The game in Lumby, B.C. is part of the league’s Kraft Hockeyville Canada series, while the two games in Las Vegas represent what is likely to be the final Frozen Fury, as territorial rights will evolve in advance of 2017-18 when the expected expansion team begins play at T-Mobile Arena.

Los Angeles will also travel to Gila River Arena in Glendale for rookie tournament games against the Coyotes on September 20 and 21.

As previously reported, Los Angeles is expected to open the season at San Jose on Wednesday, October 12, and return to Staples Center for the home opener against Philadelphia on Friday, October 14, 49 years to the date that the team played its first NHL game, also against the Flyers. The full NHL schedule is expected to be announced next week, per reports.

The Kings’ annual Training Camp begins with its first on-ice session on Sept 23 at @ToyotaSportsCtr in El Segundo. pic.twitter.com/1MWG6eaOmX