Onward to the off-season 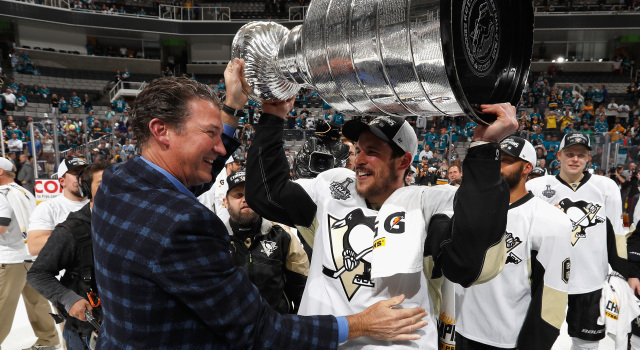 Congratulations goes out as well to Sidney Crosby, whose personality, stewardship and importance to the game may not be fully understood by those outside of the 412 area code. Until Overlord McDavid seizes power in a bloody coup, Crosby is the best player in the league and among the very most exciting players to watch, and though strong arguments can be put forward for a Phil Kessel or Matt Murray Conn Smythe campaign – in successful Stanley Cup runs, there are always a number viable players to choose from – I don’t think one player had such an impact at both ends of the ice, in all situations, while serving as a conduit of the team’s emotional and tactical efforts.

Here’s Darryl Sutter speaking about Crosby on December 4, the day before the first of the Kings’ two wins against the Penguins this season:

Maybe he’s playing a more complete game, even more so. Their lineup is deep. It’s like four good lines deep, the way have guys spread around. They have Hornqvist playing the third line, and Eric Fehr and Matt Cullen are on the fourth line with the Russian boy, so pretty deep. Everybody’s talking about it because Crosby’s numbers are down, but the team’s not getting enough credit for goals-against. It’s probably one of the best they’ve ever had. They’re playing a game that’s more suited for success.

This was noted, of course, in the final throes of the Mike Johnston empire, on a day in which the Penguins held a tenuous grip on a wild card berth. Mike Sullivan generated that buy-in, and though the Penguins are pressed up against the cap and will have to make a decision on Marc Andre-Fleury, it’s easy to envision them amongst the teams with the most credible claims to the 2017 Cup.

I’ve spoken with several Pittsburgh and non-Pittsburgh writers about Crosby, who always becomes the scorn of opposing fans even though he’s simply fantastic to watch and among the most skilled players any of us have ever seen in our lifetimes. Yes, there are some valid if secondary complaints about his regular conversations with the officials, or some of his antics from playoff series in prior years. That he is a constant focus of those who choose when, where and on what network to televise games, but he can’t control any of that. For someone whose ascension to the peak of the hockey world was chronicled before he began playing junior hockey, and for a player who has had his on-ice life spotlighted and dissected more than any other player of his era, he has handled himself with class and consideration, and you’re not going to find many people who interact with him regularly or semi-regularly searching for put-downs on his character or temperament. The NHL is fortunate to have him.

Spiel over. Onward to the off-season we go. The next month represents the busiest part of the off-season, and as usual, expect regular reports through free agency intermixed with player evaluations. One minor scheduling bit to note – had San Jose won the Stanley Cup, the plan was to have Los Angeles open up the season at the SAP Center on Wednesday, October 12. Now that the celebration will be pared and the Sharks will be hanging a conference banner, I’m not sure if that’s still the case. In any event, the Kings’ home opener will take place on Friday, October 14. The full schedule is expected to come out around June 20-22.

For the purpose of conversation, here are Bovada’s most recent Stanley Cup odds. It’s worth about as much as Stanley Cup Champion San Jose Sharks paraphernalia because we’re not yet at the player movement part of the off-season. But, hey, content is content is content, and it’s June 13. (Happy anniversary, by the way, Kings fans.)

A site note: LA Kings Insider will be on hand at both the NHL Awards and the NHL Draft next week. As always, there’s plenty more to come, Insiders. Enjoy your Monday.