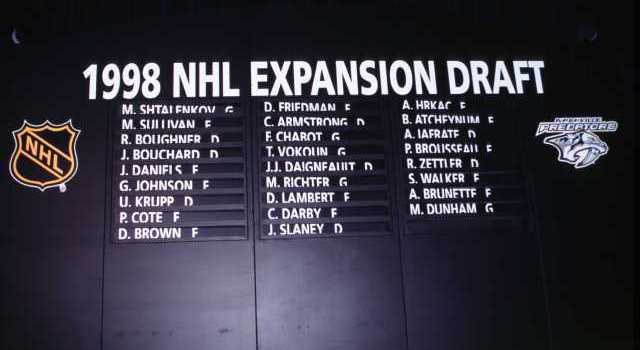 It’s a bit of a slow Friday in El Segundo as hockey operations concludes a week of extensive meetings covering areas related to scouting, development, coaching and personnel. I’m hoping to have some updates for you as we transition into next week and towards the NHL Draft.

In the meantime, a pair of reports emerged today regarding additional details on a hypothetical expansion draft. This draft is expected to evolve from the “hypothetical” to the “actual” when the NHL’s Board of Governors vote with a two-thirds majority to approve expansion to Las Vegas for the 2017-18 season when they convene at the NHL Awards in Las Vegas on June 22.

First, from Chris Johnston of Sportsnet:

Among the previously unreleased details being distributed, as told to Sportsnet by multiple sources, is an experience criteria attached to the players each team leaves unprotected. A minimum of two forwards and one defenceman must be exposed who have played 40 games the previous season, or a total of 70 over the previous two.

There is also a requirement that the 40/70 players are under contract for the first expansion season.

Johnston also confirmed the report earlier in the week from Larry Brooks of the New York Post that players with no-movement clauses in their contracts count against a team’s protected limit, “provided that those contracts and clauses extend through the 2017-18 season.” In other words, if they extend through July 1, 2017, shortly after the time the draft is expected to take place, they wouldn’t have to be protected. That protection sounds obvious, but there were prior reports that even NMC-bound players with expiring contracts would have to be protected.

Los Angeles has two players with no-movement clauses: Anze Kopitar and Vincent Lecavalier, though Lecavalier has expressed his intention to retire after this season.

Yes, Columbus has five NMCs, the combined fourth largest cap hit, and 19 players under contract for next season. The Blue Jackets were 34-40-8 in 2015-16.

Current teams, per multiple reports dating back to the regular season, may be able to protect either seven forwards, three defenseman and one goaltender, or eight skaters and one goaltender. James Mirtle of The Globe and Mail also reports that “the expansion team must select players that have a total value between 60 to 100 per cent of the 2016-17 salary cap,” and that each current team will lose one player. The expansion team will have, at a minimum, three goalies, nine defensemen and 14 forwards, according to Mirtle. His story, which has other pertinent details, is right here.

Here’s to hoping the Kings don’t lose the next Kimmo Timonen this time around.