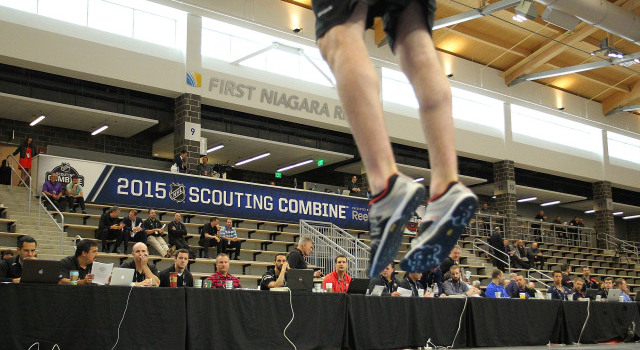 The NHL Draft is three weeks away, and in advance of the annual event, top prospects have met at Buffalo’s First Niagara Center and HarborCenter complex to undergo both physical and cerebral assessments at the NHL Combine. From there, teams check off all marks in their evaluations and finalize their comprehensive studies of this year’s draft crop, thus completing a body of work several years in the making.

As of now, Los Angeles owns four picks in the seven-round draft, and none earlier than 51st overall. But draft slot jockeying occurs every year, and while the team isn’t in a position to “spend a lot of time out for dinner with Auston Matthews and [Patrik] Laine,” as Vice President of Hockey Operations and Director of Player Personnel Michael Futa said, preparation continues as it would in years in which the team owned a first round pick.

“In my case, knowing where we’re picking, [Director of Amateur Scouting] Mark Yannetti and the group kind of gave me a list of names that I could become more focused on that they feel that not being in the amateur field as much anymore that I could focus on via live viewings and video viewings and interviews that they feel are realistic guys that are there for the second pick, so that’s great help for me,” said Futa, who was also joined at the Combine by Christian Ruuttu and Chris Byrne. “But … our staff takes a lot of pride in all these things, and Dean’s always been [an advocate of] the building and stuff like that, and sometimes we may look a little bit more.”

The thrust to take the best player available is a universal objective, but the team may start looking for particular players to fill spots, should they approach a juncture in the draft in which their list more or less says a collection of players are relative equals.

“If there’s a tie now, there might be going a little bit more with a need positionally,” Futa said. “Our top guys coming up now seem to be a little bit more of the forward ilk, so if there’s a chance to add a skilled defenseman or add a defenseman or a goaltender, it might be something that we lean towards, but never at the sake of, as Dean said, ‘get the player.’ So if the best player’s a forward, then we’ll take a forward. It’s a lot of fun. Again, it’s a lot of work, but it is a lot of fun, and it makes it even more fun when you’re hanging out with this group that we work with, because there are a lot of laughs, but a lot of work goes into it.”

That camaraderie isn’t just lip service – keep in mind the late-night brainstorming sessions in Dean Lombardi’s garage, or the “creative energy” as articulated by Yannetti – and it extends to the players they interview at the Combine following many months of an extended scouting and familiarization process

“Some of the kids now, they’re well coached on coming in, so you try and get ‘em a little out of their comfort zone so you can see a little bit more of what they’re really like and to see if their personalities match their game and their thoughts,” Futa said. “Clearly ours is an organization that relies heavily on a great development team, drafting traits that we feel our group can work with.”

“I guess the other thing is just how a kid can critique himself. It’s one of the hardest things for anybody to do, to critique themselves and critique their own game and what they really, truly have to do moving forward to be a National Hockey League player.”

In some cases, it may require that a layer of artifice may have to be stripped down, but that’s only natural when dealing with teenagers who are looking to make a positive impression during an important juncture in their professional lives, and these kids have been well coached by their agents and handlers.

“I think that Mark and I have been doing this a long time at the combine the last few years,” Futa said. “Our guys do such a good job throughout the year introducing these kids and kind of prepping you on certain things that might catch them off-guard, whether it be an off-ice incident or some stuff that they might be sure you already know about themselves or their past, their situations, where again, where you’re not just getting your ‘yes, sir,’ ‘no, sir,’ ‘yes, I’ll do anything you’ll want to, sir.’ Every kid is different, and if you feel comfortable speaking to kids, these guys that have been through it, and some of the successes that we’ve had in the past that you feel comfortable and you can go down different paths just to see how they respond. I don’t think it’s such a specific question as there’s just a comfort level, and in a lot of the cases they’re nervous enough, or some of them come in pre-emptive.”

“One kid this week had something like a rehearsed motto of life, which he flubbed. Apparently the teleprompter moved on him, but it was one of those things that you’re just kind of like, ‘come on, let’s be a little more natural.’ But, you know what? These days mean a lot to these kids, and it’s again, just having the ability to question people and make them feel comfortable, and at the same time make them feel not so much – Yank uses the term ‘uncomfortable’ – but just where they’re not giving you canned answers. You kind of break the nut, and then you end up having a great conversation with the kid. I mean, as I said, these kids have all been talked to at length before they arrive at the combines. If you’re meeting kids at the combine for the first time and trying to figure them out in 15 minutes, then you’re not doing your job. That’s never an issue with us.”

Futa didn’t hesitate to answer when asked for an example of a player whose personality was genuine and quickly came off accessible during the scouting and interview process.

“Kyle Clifford,” he said, immediately. There are stories of the force with which Clifford shook hands with representatives of the Kings in the lead-up to the 2009 draft.

“The handshake is one thing, but you just knew. And that was the draft that we knew was like the old ‘culture-changing’ draft, so to speak. I mean, we had a ton of work that we did with Drew, but I mean, Kyle Clifford, as much as every kid wants to be a National Hockey League player, I truly believe that by the time we were done with our interview process, that Kyle Clifford wanted to be a Los Angeles King to the point that he was telling us the stories about some other teams were kind of pissing him off. He was getting overly aggressive trying to scare some teams off. He almost stickhandled me through teams that were interested in case we had to move up or down. It was just somebody that became so close and I got to know so well that it’s a different feeling. By the time they get down to the table, you feel like you’ve known ‘em for years, and I think when you end up winning with somebody like that, you feel better about everything altogether, too. There are a ton of them, honestly, the kids that we’ve taken and had great combine interviews with, but I guess Cliffy was one who’d just stand out because it was so obvious that he wanted to be a Los Angeles King. He was just so refreshing, because there were no canned answers to the point that I actually said, ‘Dean, you’ve got to actually meet this kid. You’re not going to change our mind on whether or not we’re taking him, but he is so unbelievably refreshing. Small town, this is his dream, tear your hand off with a handshake, crushed the fitness test, no B.S. answers, everything comes right from the heart, and it’s exactly the way he plays. So I think that’s probably one of the most enjoyable combine interviews, The Kyle Clifford Experience.”