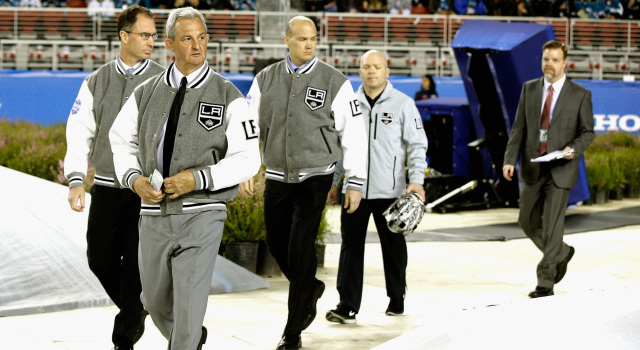 Good afternoon, Insiders. I’m passing along some Kings news and notes in advance of the Pearson evaluation, which should be completed this afternoon. There’s nothing major here, but there are one or two L.A. snippets definitely worth your attention.

From Elliotte Friedman’s 30 Thoughts column, which came out today:

20. As teams searched for head coaches, the status of Los Angeles Kings associate head coach John Stevens and assistant Davis Payne was uncertain. GM Dean Lombardi has a policy — he doesn’t like opposing teams to ask for interviews just for the heck of it. He wants assurances Payne/Stevens are serious contenders before any agreement.

Lombardi’s contracts tend to be very specific in their wording, with carefully considered “outs.” Can’t be certain of the language in their particular contracts, but it doesn’t sound like anyone convinced Lombardi either was a strong enough candidate to grant permission.

And, later in the column:

26. Apparently, one of the issues to sort out in Las Vegas is the local broadcast “map.”

The NHL’s cone of silence makes it difficult to determine if there’s been a resolution, but it comes down to this: currently, Vegas is Anaheim/Los Angeles territory. Those are the televised teams in the region. John Shannon, expert on all things television, points out there will have to be some kind of payment made to the Ducks and Kings. (A similar negotiation would play out between Quebec City and Montreal.)

When Ottawa came into the NHL, it badly wanted Kingston to be part of its broadcast zone and had to pay Toronto to get that done.

There are also interesting updates on the Ducks’ coaching search, draft positioning and the prospects available for teams selecting near the top, as well as updates to the annual NHLPA internal discussions over whether to activate the 5% salary cap escalator.

It’s the best column in hockey, and it’s compiled by insider Elliotte Friedman. Give it a read.