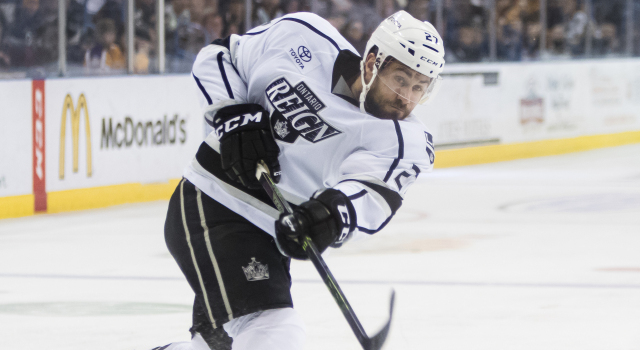 Reign exit interviews were held on Tuesday, May 31 and the media present had the opportunity to speak with head coach Mike Stothers, team president Darren Abbott as well as NINETEEN players. This is the first entry of “Exit Entries,” where what was discussed will be noted player by player. Both Michael Mersch and Nic Dowd were among the four players (also Kevin Gravel and Derek Forbort) that Stothers named as far as having a good shot at making the Kings’ opening roster.

The Reign’s left winger didn’t hold back when asked what his one takeaway from the season was after the team’s run was cut short.

“Losing sucks, that’s for sure,” said Mersch, who had 24 goals in the regular season and two in the playoffs. “We had a great regular season and the last series didn’t work out for us. We worked really hard during the year and for it all to be away with four straight losses was pretty tough.”

Mersch, who was held without a goal in the Western Conference Finals against Lake Erie, said he’ll use the sting of the sweep to push him during offseason training.

“Of course,” said Mersch, who works out in Chicago. “You don’t want to see anyone else with the trophy you’re trying to win. That’s probably going to be a huge motivator this summer.”

The 2015-16 season was milestone one for Mersch, who broke the 20-goal plateau and made his NHL debut with the Kings.

“It’s definitely a process,” he said of the benefits of the three call-ups he had with Los Angeles. “You’ve got to deal with a lot of people telling you a lot of things and they’re all trying to help you, but you’ve got to learn how to manage things that other people say and just play your game. There’s a lot of learning that goes on with that stuff. I just got a little taste of it. Going to take some time this summer to sit back and think about it and let it help me.”

While going up to the Kings and back down again to the Reign, he took pride in the way he elevated one aspect of his game.

“I think being a leader, trying to be a leader on this team throughout a whole season, not just like at a end of the year like last year,” he said. “I think that was one of the biggest things was learning how to try to be a leader throughout the entire season and how to do that with all the ups and downs that a season has.”

When asked flat out if his goal is to make the Kings next season, it was an easy answer.

“Yeah. There’s a lot of little goals that I think they want to reach along the way but that’s obviously a huge emphasis this summer is try to work as hard as I can to make the team next year. I think that’s everybody on the team’s goal,” he said.

His focus for the offseason — as he said every offseason is — is to work on his skating and lengthening his stride.

Mersch, on offseason training:
You have to have a good offseason, especially, I’ve realize that now being in my second year pro that you need to work hard in the offseason because you don’t have as much time to work out and make gains during the year. You don’t want to be playing catch-up, coming into the season out of shape. Biggest thing is to gain some more muscle that I lost during the season, which just happens. And then that’s probably it. Just coming to camp ready to go and in shape. 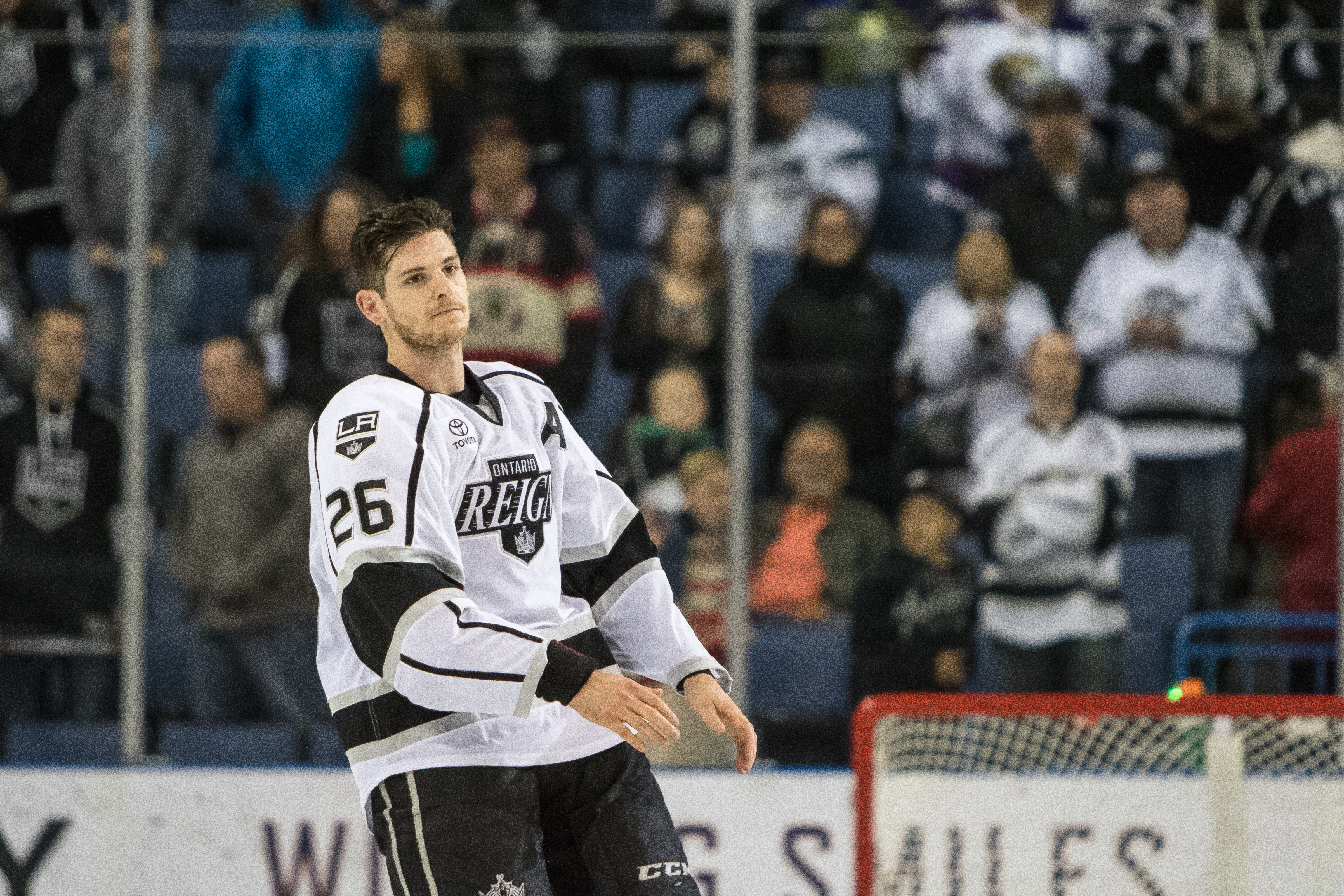 Nic Dowd will be making his way to Minnesota today where he will live and train for the summer.

Like Mersch, this season saw the St. Cloud State alum make his NHL debut (in Minnesota, no less) and serve as an alternate captain for the Reign in his second year in the AHL.

“It had its challenges being a so-called younger guy, second-year guy and having a lot of veterans on our team,” said Dowd. “But I think Backs and Vinny and Schultzy and guys like that made it really easy. I wouldn’t say that I was one of the most vocal and talkative guys and telling guys what to do in the locker room, obviously I think as a second-year guy it was much easier to let my play speak for itself … I think every little thing is another piece of the armor and it just allows you to grow as a player and a person.”

Dowd was up with the Kings toward the end of the regular season in late March. He admitted when he returned to the Reign that it wasn’t an easy transition.

“Obviously you don’t quite know what you have in store till you get there and it’s a hard feeling to explain once you’ve left,” he said. “It’s the best league in the world and once you’ve went there it’s the only place you ever want to be. I think everyone has challenges with coming back down and I think I faced those this year but I think that experience will hopefully help me a lot in the long run.”

Still, he led the Reign with 4 goals and 7 assists in 13 playoff games. Like Mersch, his eyes are on the Kings roster spot in the upcoming training camp.

“Yeah. I would definitely say so,” he said when asked if that’s his goal. “I think any guy that you asked should say that because that’s where everyone’s trying to get to and I think you’d be selling yourself short obviously if you weren’t shooting for the NHL next year. I think anybody in that locker room would have the same answer. Yeah, definitely. Obviously just try to get myself every opportunity to succeed next year.”

Said head coach Mike Stothers: “Dowd was recalled late in the year, stepped in and did a real good job in the middle of the ice for them. He took his game to another level this year. So, looking forward to seeing what the future holds for him.”

Dowd talked about the ways that he brought his game to the next “level,” as Stothers indicated. It started with the duties that come along with being the team’s top-line center all season long.

“I would always like to think that I had a 200-foot game but I think what was really challenging this year as compared to last year when we had a lot of high-end talent on our top two lines I wasn’t counted on as much offensively and I think that helps a lot when you’re just allowed to go out there and play defense and you have a lot of guys who are ahead of you that can score goals, it takes a lot of pressure off you,” he said.

“Having to do both sides of the game I thought was challenging, and then at the same point, last year you’re getting to play third, fourth lines on the other teams, you might get the second or third D pairings and this year a lot of our guys found ourselves playing those top D pairings and those top two lines. There’s a lot of good players in this league.”

Dowd, on his goals for the offseason:
Getting bigger and stronger is obviously everyone’s main goal in the summer. I think it’s going to be a lot of hockey specific stuff, on ice and stuff that we’ll be working with the development guys with that will obviously give us the greatest opportunity to get to the next level. I’m sure they’ll have a lot in store for us and that it will be a good summer.

Dowd, on the first season in Ontario and being in a closer location to the parent club:
It’s huge. Not only geographically, but they’re here all the time. Rob Blake’s here all the time and the development guys are here all the time. It’s good to see those guys around and realize that we are one step away because I think sometimes last year in Manchester it’s hard to realize how close you actually are when you’re that far away. But it was great. You see them all the time and I think the biggest thing is, ‘A’, it’s a constant reminder that they’re always evaluating you, and ‘B’, if you continue to play well, you’re that close, which is great.