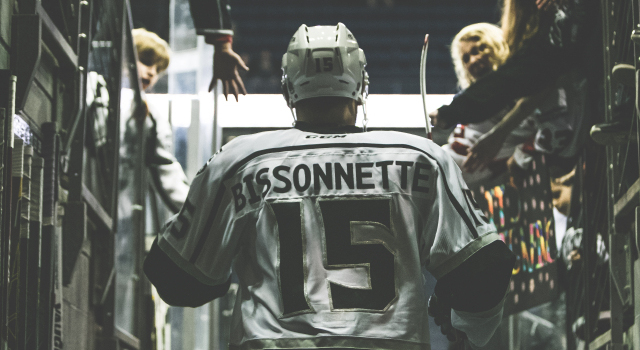 Reign exit interviews were held today (Tuesday, May 31) and the media present had the opportunity to speak with head coach Mike Stothers, team president Darren Abbott as well as NINETEEN players. In the coming days, there will be a new series of posts called “Exit Entries” where what was discussed will be noted player by player. But, as far as today was concerned, here are the biggest nuggets of news and what was said and what was learned as all involved with the Reign had their last day together in Ontario for a while.

–Head coach Mike Stothers spoke for a season-high 26 minutes. He listed many things the Reign did while adding, “It’s all positive. It maybe stings a little in the fact that it was a four-game sweep [against Lake Erie]. I thought we were better than that but there were some circumstances involved that maybe in an extra couple of days would have made a difference, but you know what, sometimes you lose to a good team.”

–Brett Sutter revealed that he had a fracture in his pelvis that he was trying to play through during the playoffs and said there’s no timeframe yet for how long he may need to recover. “Should know more in the next few days but that’s playoffs, you do whatever you can to help the team and would have no problem doing it again,” he said.

–Veteran Paul Bissonnette said he’d like to play pro hockey “at least a few more” years. Bissonnette was on an AHL contract and said he’s hoping to know sooner rather than later if the organization plans to keep him and then joked, “if they want me back, I guess I’ll play. I don’t really know.”

–Jonny Brodzinski confirmed his left thumb injury and subsequent surgery was the result of blocking a shot in the final game of the San Jose series. “I’d probably say another four weeks and then I’ll be back to 100 percent,” he said.

–Sean Backman, who was on an AHL contract, on what the future holds for him with the organization: “That’s something I have to discuss with my agent, obviously. I don’t know.” And then when asked if he hopes to be back he replied with, “Yeah. I would like it. I have friends and family out in California. This organization’s treated me really well, so I’m happy with the way things are here.”

–Team President Darren Abbott said the team would eventually like to host the AHL All-Star Game and is looking to build a practice rink in Ontario, possibly next season. Also, Abbott added that Rockford and Iowa will be on the Reign’s schedule for next season and for those wondering, Lake Erie will not. Had the Reign made the Calder Cup Finals it would have been broadcast on FOX Sports West and Abbott noted that he and Luc Robitaille were working on that and in the future they’d like to “explore a 10-game package” for the season after this coming one.

–Defenseman Derek Forbort, a restricted free agent, was asked if he had spoken to the Kings about returning and his response was, “No. Haven’t gotten there yet.” But when asked if he’s hoping to be back his immediate and quick answer was, “Yeah. Yeah, definitely. I love playing in this organization and if I get the opportunity to keep doing that I would 100 percent love to.”

–Defenseman Jeff Schultz on his unrestricted free agent status and his future: “I haven’t made a decision, or heard anything so just kind of wait and see.” Schultz said that if another role similar to what he played with the Reign were to open up he would be up for it but that, “I still believe that I can play in the NHL at any sort of role if need be so that’s kind of the direction I’m heading … trying to get back to the NHL is the number 1 priority.”

–The best quote of the day in regards to the move to Ontario and being closer to the Kings and their development staff came from Nic Dowd, who was one of the players who made his NHL debut this season: “It’s huge. Not only geographically, but they’re here all the time. Rob Blake’s here all the time and the development guys are here all the time. It’s good to see those guys around and realize that we are one step away because I think sometimes last year in Manchester it’s hard to realize how close you actually are when you’re that far away. But it was great. You see them all the time and I think the biggest thing is, ‘A’, it’s a constant reminder that they’re always evaluating you, and ‘B’, if you continue to play well, you’re that close, which is great.”

–Stothers was asked if an NHL team came knocking for his services would he be interested: “I don’t know. It’s easy to say yes, that you would, but I don’t know. I’m pretty happy doing what I’m doing. I’ve been to the NHL, it’s great, don’t get me wrong, but there’s a real sense of satisfaction and accomplishment when you’re able to help these younger guys and fulfill their dream of playing in the NHL. It’s a weird feeling but you take great pride in seeing somebody play their first NHL game or turning on a TV and seeing a highlight of somebody getting a point or whatever in their first game. It was the same way in junior but it’s even more magnified here in the American Hockey League. You never say never. Am I actively looking? Not a chance. You might be stuck with me.”

–Stothers’ answered this way when asked if other players were banged up at the end of the year besides Brodzinski and Sutter: “Yeah, yeah there were. It’s tough. This time of year everybody’s got issues on their roster. I’m not trying to be evasive or anything else but if I was to start listing the guys that were hurt it would make it sound like I’m making excuses for the fact that we didn’t beat Lake Erie. I would never do that. They played well, they were a great team and actually they played better than us. They deserved the accolades that they get and they deserve to be going to the finals. I won’t diminish that by getting into injuries and I’m sure they had some too.”