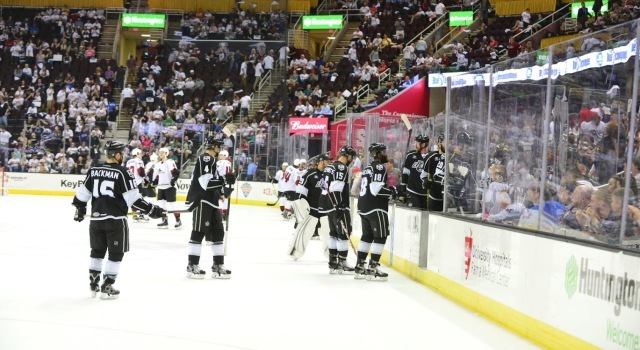 Reign game breakdown
The Reign put together their best game of the series, and it still wasn’t enough to break the Lake Erie Monsters. The defending Calder Cup champions are done, swept by the Monsters in the Western Conference Finals. Lukas Sedlak scored two goals, his last one being the game-winner in double overtime and the Monsters defeated the Reign 2-1 in Game 4 at Quicken Loans Arena on Thursday to advance to the Calder Cup Final. The Reign, the very best team in the West in the regular season fell into a 3-0 series hole as game by game they could not handle the speed and the opportunistic scoring of the Monsters. With their season left to play for in the fourth game, they provided a performance from goalie Peter Budaj on out that was almost good enough to extend is. For the third time in the series the Monsters scored the opening goal as Sedlak cruised to the slot unattended and was fed by Kerby Rychel, who had just curled around the Reign net. The goal came at 6:25, just 11 seconds after the Reign had successfully killed an interference call on Paul LaDue. With three minutes left in the first, the Reign were outshooting Lake Erie 8-3 but let a late flurry end the period with a 9-6 SOG advantage. In the second period, they got back to their brand of hockey, establishing their forecheck and were rewarded with scoring chances for Joel Lowry and Nic Dowd. With an opportunity on the power play midway through the period the Reign couldn’t convert and the best chance instead went the other way, a breakaway for Michael Chaput that Budaj answered. After logging over 100 minutes without putting a puck by red-hot goalie Anton Forsberg, Lowry provided relief and an equalizer just 2:44 into the the third period. Forsberg mishandled a Ryan Horvat dump-in off the end boards and Lowry jumped at the opportunity to poke the puck by a unbalanced Forsberg. Ontario came in outscoring the Monsters 4-1 in third periods and outshot them 14-5 is this one, but the game went to overtime thanks to Reign defenseman Derek Forbort laying out to block a mini-2-on-1 in the final minute. The first overtime was nearly all Ontario and Jordan Samuels-Thomas shot wide on a clear breakaway and later missed on a wraparound attempt. Between those chances, Budaj, who finished with 27 saves, came up with one of his biggest stops of the series by challenging Oliver Bjorkstrand on a rebound in the midst of a penalty kill with Dowd off for high-sticking. More chances came for Ontario in the second overtime, but none better than Michael Mersch finding himself completely alone in front of Forsberg, and with time to stickhandle, his backhanded attempt found Forsberg’s glove nearly 5 minutes in. “He’s been making good saves and had my number this series,” Mersch said. Then, in a hectic shift moments later, the game and the Reign’s season was over. Kurtis MacDermid hit Josh Anderson in the right corner and the forward was slow to get up, but when he did he made his way with the puck top off the circles, fought off Andrew Crescenzi and fired a shot that bounced off traffic in front and was gathered by Sedlak for the winner.

Best quote
Head coach Mike Stothers, on the season and looking forward: “Damn proud of everybody. It was a great season. Looking forward to next year. Somebody’s going to have our hardware and we want it back.”

Three stars
Lukas Sedlak – The hero Sedlak was signed to a one-year, two-way contract extension through the 2016-17 season just a day prior to Game 4. The third-year pro made that extension look like a brilliant move for the Blue Jackets as he delivered his third and fourth goals in the series to finish off Ontario. On his first goal he raced away from Sean Backman to find the empty area in front of Budaj and on the game-winner he found the puck even with Justin Auger and Vincent LoVerde in front.
Anton Forsberg – A 41-save performance by the goalie who hadn’t started a playoff game this postseason until this series was deserving of the Monsters’ “player of the night” tuxedo shirt. Forsberg followed his 26-save shutout outing in Game 3 with another beauty. In all, he allowed just six goals in four games against the Reign and was masterful in relief of Joonas Korpisalo, who had faltered in closing out the previous series.
Peter Budaj – In his final stand, the veteran netminder who won the AHL’s goalie of the year award gave the Reign a chance to win, as noted by Dowd in his postgame interview. Budaj finished with 27 saves and his mettle was tested on Chaput’s breakaway and the stop in the first overtime that Bjorkstrand couldn’t believe he missed. He started every game in the playoffs and like his team, lost the last four.

Turning point
Mersch had the game on his stick in double overtime and said afterwards: “Maybe should have moved my feet a little bit, try to get to the other post but he had his glove up and and cut down the angle and made a good save.” Forsberg’s save forced him to stare stunned at the lights at the ceiling of Quicken Loans Arena. The Reign’s leading goal scorer in the regular season with 24 tallies, had nearly an identical chance to tie it and force overtime in Game 2 and was stopped in the waning moments. He finished with zero goals against Lake Erie on 23 shots.

Stat fact
2:47 – The total amount of time the Reign led in this series, a minute stretch in Game 1 after an opening goal by Backman.

Lineups and injuries
Kris Newbury was scratched after playing in all of the first 12 playoff games for Ontario. … Brett Sutter, who had been battling injuries throughout the postseason, did not dress after skating in the previous two games.