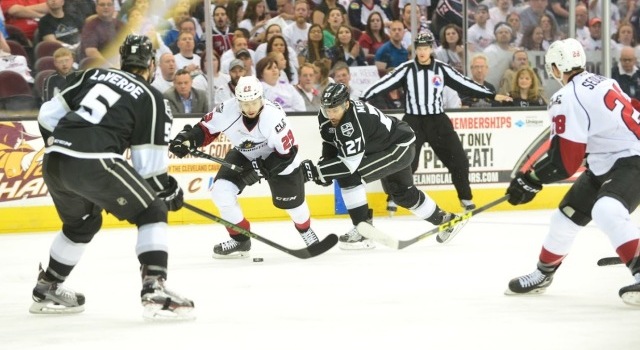 Michael Mersch, on the difference in the series:
They jumped out on us. They beat us at home and beat us twice at their rink. When we got down, they kept capitalizing. They’re a really opportunistic team so you’ve got to tip your caps to them.

Mersch, on the Reign finally being able to execute their game plan but it coming too late in the series:
You’d like to play your best games from Game 1 but we had to try to battle back and they did a really good job at keeping every game close and staying in front of us. I don’t know. Their goalie played well. They scored on a lot of chances. They were going off pad and getting rebounds. They just did a really good job. You’ve got to tip your caps to them.

Mersch, on his chance in overtime 1-on-1 on goalie Anton Forsberg:
Maybe should have moved my feet a little bit, try to get to the other post but he had his glove up and and cut down the angle and made a good save. He’s been making good saves and had my number this series. Got to tip your caps to him, he’s really good.

Mersch, on the feeling after the loss:
We had a great season and everybody’s close on this team so it was tough. It’s heartbreaking, to say the least. We’re really proud of our team this year, we did a really good job during the regular season and the first three rounds and Lake Erie had our numbers this series. Like I said, they were really good.

Nic Dowd, on the missed opportunities in this series and in this game:
They’re a great team. They played really well, congratulations to them and good luck in the upcoming series for them. They’re a good hockey team, played us well all four games. I think we’d like to have some back in those first three games but I thought we played well in this game and Budes gave us a chance to win. So, I think that falls on us but congrats to them.

Dowd, on what Lake Erie was able to do that San Jose and San Diego couldn’t:
It’s hard to say. I think it didn’t help us that we were trailing almost every single game. We had one lead all series and that came in the first game in the second period. Our lapses, mental lapses allowed them to get big leads and that’s hard to come back from in playoff hockey.

Dowd, on what made the season a special one:
You hear a lot of stories of pro hockey where teams aren’t very close and guys are playing for themselves and that just wasn’t the case this year. We had a lot of guys that sold it out for the team every night. We had a great coaching staff and people really cared for each other and when people want you to be successful and you’re surrounded by those people it’s easy to succeed and I think everyone would back that.

Sean Backman, on the loss:
No one likes to lose but we played hard. It wasn’t because of lack of effort tonight. The team thought we could come back and actually do this and to lose in double overtime it stings and it’s going to sting for a while.

Backman, on the memories of a long season:
Right now the loss is fresh in our minds but to look back and try to see some of the good that came this season this team accomplished a lot. Winning last year and then coming this far to try to win again this year is pretty impressive and I’m really proud of my teammates and the way we played this season.

Backman, on how this team differed from last year’s and what made this one special:
I think this team didn’t have some of the offensive talent that we had last year. This team did have offense but we had some pretty gifted players offensively last year and I think learning how to play as a team and working through — we had a lot of new faces. Guys had to learn our system and how we play, so I think it was a learning process for a lot of the guys and I’m proud of my teammates, the way we handled it and came through this year.

Backman, on the team’s first season in California:
Our fans were nothing short of spectacular this year. I don’t know what we were in the league in attendance but I’m pretty sure we were in the top 5 or so. Just seeing their excitement of us coming there and watching us play it really meant a lot to us. We’re pretty happy with it.

LoVerde, on being able to stay positive in the face of a tough Game 4:
I guess you can look at it that way. It’s tough. We have a great group of guys in there. It’s tough. Obviously you want to be on the winning end of games. You want to go out at the end of the season winning like we did last year. A lot of those guys got a taste of it and it’s disappointing, it’s tough.

LoVerde, on what made the team so special:
The camaraderie. Everyone got along great. Like I touched upon before, guys came to work every single day to improve, to get better, to be better hockey players and better people. I’m proud of how they are as hockey players but even prouder of how they were as people and how they conducted themselves. Every single guy throughout the year was great and it’s sad, it’s tough. Describe it many different ways but at the end of the day the sun’s going to come up tomorrow, it is what it is, but you always want to go out winning the last game of the year.

LoVerde, on the first season of AHL hockey in Ontario after being part of the previous ECHL team:
I thought the fans were great throughout the year. Great home-ice advantage, they were great in the playoffs. There was a tremendous amount of support from the Inland Empire. Yeah, it was awesome. It was great to be back in Ontario. Obviously, we probably would have liked to reward them a little bit better but at the end of the day there was a lot of positives to take throughout the season. No one’s feeling too great right now but a week or two from now we’ll probably reflect and we’ll be slightly happy with the progress we made throughout the year. But like I said before, competitive group of guys in there and obviously we all wanted to win.