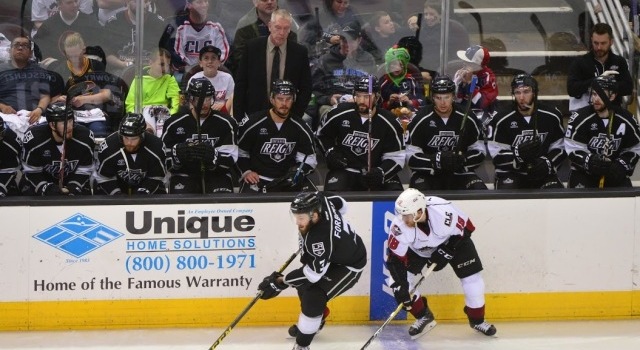 On the loss, the season and looking ahead:
Our best game was the last game. That was the best game we played. I thought we played a great 60 minutes, well, and then some. I was proud of them. You’re down three games to none and the last one, the third game, we weren’t great, we weren’t very good at all. And they scored early tonight and you could think well, it’s a pretty tough road, but we dug in, nobody was ready to go home yet. So, you think back to Big Mike, standing all alone in the slot. Again, the guys that you wanted to have the puck, had the puck. Damn proud of everybody. It was a great season. Looking forward to next year. Somebody’s going to have our hardware and we want it back.

On the first goal of the game and if it hurt their spirits:
There’s never been a time where I’ve thought, ‘oh boy, we’re done.’ Never. It’s too good a group. They’re good people. It’s a good team. Good players, good individuals, but more importantly they’re a good team. So, I never worry about them. They’d never let me down.

On why this group was a special one:
Good character guys. They came to work every day, never shortchanged ya. They always did what was best for the team. Some guys sacrificed – probably the way that we play – sacrificed some individual points or production for the betterment of the team. We finished first in our division, we finished first in our conference, with a team that was a lot different than the team from last year. Everybody improved. So, how can you be disappointed?