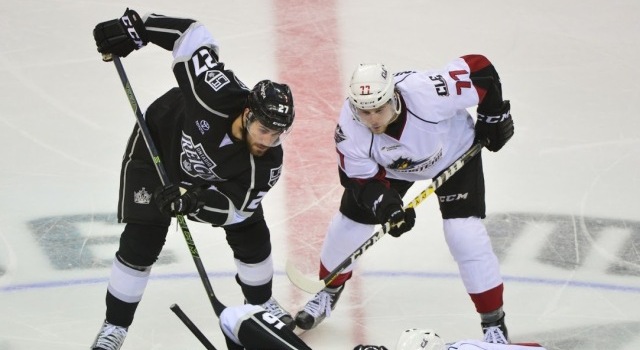 –Lukas Sedlak puts the Monsters up 1-0 at 6:26 of the first period when Kerby Rychel finds him with a pass from behind the net. The goal came 11 seconds after the Reign had finished killing a Paul LaDue interference call:

Lukas Sedlak nets his 7th of the playoffs and gets the scoring started for @monstershockey​. #ONTvsLE pic.twitter.com/QS6XK8wXkq

–Joel Lowry takes advantage of a misplayed puck by Monsters goalie Anton Forsberg and ties the game 2:44 into the third period for his fourth goal of the playoffs:

Lowry capitalizes on a misplay and ties up the game for the @ontarioreign​. #ONTvsLE #CalderCuphttps://t.co/BljzJf6Vwe

–Sedlak’s second goal of the game is the game-winner in double overtime as he buries a rebound of a Josh Anderson shot:

–Lake Erie has won the Western Conference Finals best-of-7 four games to none and will advance to meet the winner of the Hershey-Toronto series in the Calder Cup Final. Hershey leads that series three games to none.

–Center Nic Dowd finishes as the Reign’s leading goal scorer in the playoffs with 4 goals and 7 assists for 11 points. Joel Lowry’s goal in the third period was his fourth of the playoffs, which finished tied for the team lead with Dowd and Adrian Kempe.

–The Reign’s penalty kill finished 5-for-5 in the game and allowed just four goals in 48 penalty kills in the postseason (92 percent).

–Anton Forsberg made 41 saves in Game 4 and held Ontario to just 6 goals in the four games. Peter Budaj made 29 saves in the loss and finished with a 3.20 goals against average in the series.

–Michael Mersch led all skaters with 8 shots on goal.

–Sedlak’s double-overtime winner was his first game-winning goal of the postseason. He scored both of his team’s goals in the clincher and finished with four goals in the series against Ontario.

–The Reign led for a total of 2:47 in the series total, a span in the second period of Game 1 on an opening goal by Sean Backman.

–Here’s how the Reign aligned in line rushes, including quite a new look up front:

–Here’s how the Monsters aligned in line rushes: